We journey with the director of the Concerto Italiano to his 2017 Monteverdi 450th anniversary project Night: Stories of Lovers and Warriors. 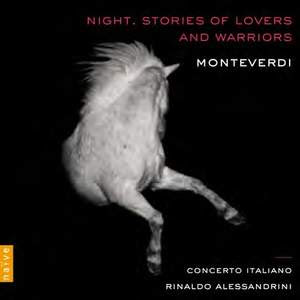 “Night. The time when the absence of light reveals hidden and sometimes mysterious aspects of reality. The time when, far from the noise of day, feelings and passions loom larger until they draw the human soul into a myriad of different and conflicting expressions. The privileged time for love, the painful time of tears or regrets...Monteverdi, who always possessed a keen instinct for the theatrical nature of life, was by no means insensible to the myriad meanings of night and the countless possibilities of evocation and suggestion it offers. But night doesn’t belong to him alone: the poets he set to music were equally unable to resist the fascination of the ambiguous contours created by moonlight.” Rinaldo Alessandrini

In 2017 the birth of Claudio Monteverdi was commemorated. Obviously this resulted in quite a number of CD productions with his oeuvre. We have seen new recordings of his best-known compositions, such as the operas and his Vespers. In fact, as he is one of the most famous composers in the history of Western music, it seems likely that his entire oeuvre is available on disc. Fortunately some performers have come up with original ideas to celebrate the birth of this genius. Among them are Rinaldo Alessandrini.

It is fair to say that Monteverdi was a man of the theatre by nature. He wrote quite a number of operas, of which only a few have come down to us. However, many of his other compositions are also of a theatrical character, even when they are written in the stile antico. His leanings towards the world of the theatre can be observed in his madrigals: the early books adhere to the style which was common in the late 16th century, whereas in later books he increasingly introduced dramatic elements. Alessandrini took an interesting perspective: music which is associated with the night and with darkness. He explains his choice in an interview in the booklet: "Night has always been a theatrical space that both welcomes and symbolises a wide variety of moods. The most passionate amorous encounters can take place at night, but it's also a time for plots and betrayals. We connect night with the secretive exchange of feelings, but also with concealed machinations. The absence of sunlight changes the characteristics of people and things. In the theatre, moreover, night is set against day, when the latter becomes the catharsis of nocturnal psychologies in the dramaturgical scheme. Poets are well aware of this: for them night has always signified an extremely sensitive moment in human life - a moment often involving solitude and peopled with illusions, but also, just as frequently, devoted to desire and the explosion of amorous feelings."

The most famous piece by Monteverdi which describes a scene at night is the Combattimento di Tancredi e Clorinda. It is included in the collection Madrigali guerrieri et amorosi of 1638, and it is a perfect example of a madrigal which is highly theatrical. In fact, one could call this piece a mini opera, and in the work-list in New Grove, it is rightly ranked among the theatrical works, alongside the operas. However, the two title characters play a relatively minor role; it is the narrator, called Testo, who has the largest part to sing. In this piece one of the main features of the stile nuovo, the ideal of recitar cantanto, is mixed with what was a speciality of Monteverdi, the stile concitato. This made a strong impression: in the course of the 17th century composers across Europe made use of this style to express strong conflicts, sometimes of a military nature - either literally or metaphorically. The piece receives here a brilliant performance, which is hard to surpass: Raffaele Giordani is a highly expressive narrator, and his diction is such, that even at the high speed Alessandrini has (rightly) chosen, the text is clearly intelligible. What is more important: the drama of the story comes perfectly off and the listener can experience the confrontation of the two title characters.

The Combattimento is followed by Vivrò fra i miei tormenti, a lamento of Tancredi when he realises what has happened. It is from the third book of madrigals of 1592 and written in the stile antico, in which all the voices are treated on equal footing. It is interesting to compare this madrigal with Al lume delle stelle from the seventh book of 1619. It is for four voices and again in the stile antico, but the line-up is unusual in that the four parts are allocated to two sopranos, a tenor and a bass, and includes duets for either the two lower or the two upper voices. "A tendency to theatricalisation is apparent throughout, yet the music doesn't depart from the polyphonic framework", according to the liner-notes.

The programme is a kind of journey through the night. It opens with Hor che'l ciel e la terra, which is enacted at the beginning of the night: "Now, while sky and earth and wind are still, and animals and birds are locked in sleep, Night's starry chariot is wheeling round and in its bed the ocean waveless lies". It ends with Quando l'alba in oriente, which depicts the splendour of dawn: "When Dawn in the East prepares to escort the life-giving sun, we see her rising from the sea clad in her shining gown, diffusing gleaming rays that conceal the stars in the sky." It is a most interesting concept, which brings together some of Monteverdi's finest pieces. Some of them are very well known, others probably less so. Even if one has all these pieces in his collection, one should add this disc. Over the years I have heard few recordings of Monteverdi madrigals which are as good as this one.

I already referred to the art of recitar cantando, which every singer here fully commands. The ensemble is also outstanding: listen to the start of Hor che'l ciel e la terra, where the voices declamate the text together, and blend perfectly. Together they then create a nice and effective climax in the next episode. The famous Lamento della ninfa is also brilliantly done; Anna Simboli delivers an incisive account of the soprano part.

This is an exciting disc which Monteverdi lovers will return to regularly. —Johan van Veen