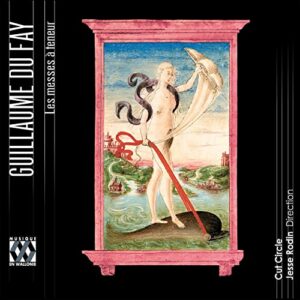 NOTE: All of the music on this program features the Cut Circle ensemble directed by our guest, Jesse Rodin. This is Musique en Wallonie CD MEW 1577-78. For complete information about this ensemble:

From Gramophone Magazine: This is a red-letter day: at last we have uniform and sensible recordings of the four great cantus firmus Masses that are more or less all we have from the last 20 or so years of Dufay’s life. As luck would have it, these Masses are not just all top-flight masterpieces but all slightly different in layout and approach: the Missa Se la face ay pale is built on the tenor of a much earlier polyphonic song of his own; the Missa L’homme armé is probably the first of the 40-odd known Masses built on that monophonic song of unknown origin; the Missa Ecce ancilla/Beata es uses two different chants; and the Missa Ave regina caelorum uses the chant in both the lower voices. Between them these works marvellously chart the state of the cyclic Mass in the third quarter of the 15th century.

The ensemble Cut Circle – already famous for their earlier double-disc set of Josquin and De Orto, also for Musique en Wallonie – comprises just eight singers, with two women on the top voice. Dufay would have had men on top, but Carolann Buff and Mary Gerbi are so good that nobody will regret their contribution. These are all top-rate singers with pure and excellently focused voices: every one of them appears here as a soloist in one of the duet sections, and the intonation and ensemble are beyond reproach.

What some listeners may find a stumbling block is the speeds Jesse Rodin adopts. For example, the Kyrie of the Missa Se la face ay palecomes in at 3’09”, far faster than any of the 12 other recordings apart from Thomas Binkley in 1987 (3’04”) and almost double the speed of what I still think of as one of the most marvellous Dufay records ever, directed by David Munrow in 1973 (5’07”). Not all the movements sound quite so hectic but most are the quickest available, and to my ears one consequence is that rather too much of the detail is swallowed. Some may also find that the lack of space rather trivialises the music and occasionally results in the singers putting too much effort into the sound. But it does at the same time make it easier for the long phrases to hang together and for the movements to come across as coherent music units.

There are many other recordings of all these works, but surely all serious collectors will want this issue of all four works, beautifully sung, beautifully recorded, beautifully presented and always exhilarating.

From MusicWeb International: This two-disc set is such a good idea and I can’t imagine why no-one had thought of it before.

These masses are late works in the sense that they seem to date from after 1450 and all use a tenor cantus firmus. To take them chronologically, in the case of the Missa Se la face ay pale, the chanson melody, composed originally in the 1430s also influences the head motif of each movement and informs the counterpoint throughout. Now you might not agree with this last statement and I am a bit out on a limb here. David Fallows even writes in his book on Dufay in the ‘Master Musicians’ series (Dent 1982) that “the cycle contains practically no reference to anything in the chanson except the tenor”. However I feel that tiny fragments of the chanson permeate many of the lines both melodic and rhythmic. In any event this is a work of much renown and its modern sounding, almost major, tonality has made it approachable.

There have been several other recordings but the one which is quite easily available is the one on Hyperion (CDA67715) recorded by the all-male Binchois Ensemble in 2008 and it’s interesting to compare. Cut Circle enthusiastically proclaim that it is their intention in this performance to “capture the energy and intensity of these [masses] in which the composer is clearly strutting his stuff”. It’s interesting that the Binchois’s Gloria comes out at 9.27 and their Credo at 9.14 compared with 7.57 and 7.41 on this new recording. The Binchois not only offer a steadier tempo but a general sense of more space and spirituality. Even so this newcomer holds the attention and gives the listener a better sense of shape and form. Incidentally Cantica Symphonia reviewed by me in 2015 (Glossa GCDP31907) takes over ten minutes for this Gloria.

Similar comments apply to the next work on CD 1 - the Missa L’homme Armé - and it’s worth comparing with Cantica Symphonia again. Their performance weighs in at over forty luscious minutes - the mass is certainly of symphonic proportions - and this new disc at just under thirty-five. Some will argue that the mass comes from Dufay’s Savoy years, like our first mass: 1453-4. Others, like David Fallows think it much later. It was certainly written for a group of high quality singers with many subtly complex rhythmic sections in evidence. There is an added problem, if Jesse Rodin is correct in his extensive booklet notes, which is made even more challenging by many clashes of B flat against the B natural required by the L’homme Armé melody. This tune was very popular for mass settings throughout the fifteenth and into the sixteenth centuries; it even drew in Palestrina. Its useful tonic and dominant emphasis allows convenient harmonic progressions. I love the genius way in which Dufay saves the full melody to be heard at a completely recognisable speed until the last invocation in the Agnus dei; it is beautifully brought out in this new recording. Incidentally the earliest setting, of an extant forty or so, may be that of Johannes Regis. The Regis has been recorded by The Clerks on Musique en Wallonie MEW 0848-9.

As great as the L’homme Armé mass is, CD 2 opens with the wonderful Missa Ecce Ancilla Domine which is thought to date from c.1463 at times seems unsurpassable. It is his most economical and is more restrained. Indeed although in four parts - like all of these masses - on looking at the score I would say that about half of it is in two parts (as in the Christe Eleison) with very little three-part writing. Two chants are used, a very rare feature, that is the Ecce Ancilla chant, in the first half of each movement, and, in the same mode, the Beata es Maria chant which appears in the second half of each. Why he did this is not really understood. In addition Cut Circle make it easier for us to grasp Dufay’s technique by giving the chant text to the lower voices when it is used (the bass is textless in the manuscript) and the mass ordinary text to the upper two. They do this as well with the other mass recorded here: the Missa Ave Regina Caelorum. The Ensemble Gilles Binchois, in a challengingly slow 1994 recording, do the same on their recording on Virgin Veritas (7243 545050 later reissued) but they place the Missa Ancilla in a liturgical context surrounded by other chants and Dufay’s attributed Mass Proper cycle De angelis.

The Missa Ave Regina Caelorum is preceded by the plainchant and by the longer of Dufay’s two settings, in four parts, of the motet; the one he asked to have sung at his funeral service. The text is troped, presumably by the composer himself, to include the line ‘Have mercy on your labouring Dufay” and ‘Have mercy on your pleading Dufay”. Touchingly he brings back the music of the last line in the Agnus dei to the words ‘Miserere nobis’. The motet may date from c.1464 but the mass is from the composer’s very last years. Even so it shows no loss of energy and nor is it short on invention. The fragmentary nature of chant resulted in Dufay breaking it up into small sections so that in the Kyrie there are, unusually, seven sections including two which are free of the cantus firmus. The opening motif is repeated in each section and it is not dissimilar in contour to that of the Missa Se la face ay pale. Technically this mass is challenging both to the performers with its changes of metre and what one might call, unexpected chromatic turns and to the listeners with so much to take in. It may well have been written for the dedication of Cambrai Cathedral in 1472. I was there only a few days before writing this but how disappointing that the Cathedral Dufay knew was destroyed in 1789-90.

The CD comes in a firm card cover with a lavish booklet of sixty pages. The essay is well translated into English and German and all sung texts are given. There are also illustrations of pages of a manuscript copy of the Kyrie of two of the masses. It's quite fun to try to follow these whilst listening.

To recap, I have some reservations about the interpretations of these pieces but I would not let that deter you from buying this set. The performers are clearly so inside the music and so technically assured and the masses make such excellent bed-fellows.