NOTE: All of the music on this program features the Cut Circle ensemble directed by our guest, Jesse Rodin. This is Musique en Wallonie CD MEW 1995. For complete information about this ensemble: http://cutcircle.org 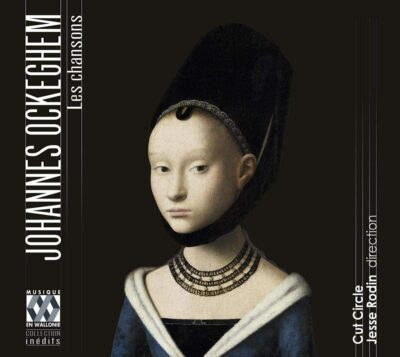 Intimacy, intensity, passion—this album explores the unfamiliar idea that fifteenth-century songs might cause us to sigh, weep, or laugh out loud. In bringing to life a world in which crying in public was not just acceptable but required, we have to take seriously the crushing despair of a line like “My only sorrow is that I am not dead,” or the undisguised sarcasm of “This is how she chopped and cooked me up.”

In Johannes Ockeghem’s roughly two-dozen songs we find not only unparalleled compositional prowess, but feelings that range from happiness to loss, anger to despair, and bitterness to merriment. The album’s all-vocal, fully texted, close-miked performances are rooted in a flexible vocal technique that aims to capture the music’s technical brilliance and emotional depth.

From Early Music America: Since their debut almost 20 years ago, the eight-voice ensemble Cut Circle has not lacked for critical acclaim, given rightly for both their quality of performance (Diapason d’Or) and their attention to historical and scholarly detail (Noah Greenberg Award). The group focuses primarily on the music of director Jesse Rodin’s specialty, the 15th century. On this, their latest double album, packaged beautifully in hardback with color images and meticulous notes, they turn their careful attention to the secular songs of Johannes Ockeghem (c.1420–97).

Ockeghem was the most influential Franco-Flemish composer of his day, he left behind fewer certain works than many of his contemporaries: 14 masses, five motets, a lament on the death of Gilles Binchois, and almost two dozen chansons.  Cut Circle explores the latter works here, and they include not only both the three- and four-voice versions of “Je n’ay dueil” but also two of Ockeghem’s arrangements: “O rosa bella,” otherwise attributed to John Bedyngham and John Dunstaple, and “¿Qu’es mi vida preguntays?” by Johannes Cornago.

Despite there being so few songs, they run the gamut of emotional range. Rodin begins his excellent notes with the words “intimacy, intensity, passion,” to which can be added wit, joy, contemplation, bitterness, grief, and despair, and the ensemble pours these out in spades. They begin the album with a visceral keen: The opening syllable of Josquin’s famous lament “Nymphes des bois/Requiem,” written upon Ockeghem’s death, is absolutely jarring, a collective wail of grief that immediately invites, even demands, the listener to participate. The closely miked ambience, the sparse use of vibrato, and the unique choice to record these works fully texted only draw the listener further into this intimately personal space.

Immediately after the opening lament, we hear the despair of “Ma maistresse,” the stinging wit of “L’autre d’antan,” the bitterness of “Ma bouche rit,” the passionate pleas of “Baisiés moy,” and so on. The star-struck admiration of “Aultre Venus” is a particular standout, as is the high-voice duet on “O rosa bella.” At times, these emotions slip out as portamenti that might be a little distracting when listening to the CDs in full but when taking each song individually work rather convincingly. Poignantly, the album ends where it begins, in a manner of speaking; Ockeghem’s own lament, “Mort, tu as navré/Miserere,” written on the death of Binchois, closes the program in spectacular fashion.

Overall, Cut Circle has produced a splendid new recording — their enunciation, sense of tempo, phrasing, and blend, and approach to emotional communication are all spot on. What sets this recording apart from others (such as Blue Heron’s stunning 2020 album) is their choice to sing this material with voices only, fully texted. It would be well nigh impossible to choose between them, so good are both. Fortunately, such is not our lot, and thus with a clear conscience I declare my hope that Cut Circle will revisit Ockeghem in the very near future.