Recent release of pieces for Passiontide including works by Lassus, Victoria, Gesualdo, and Jacques Arcadelt.. 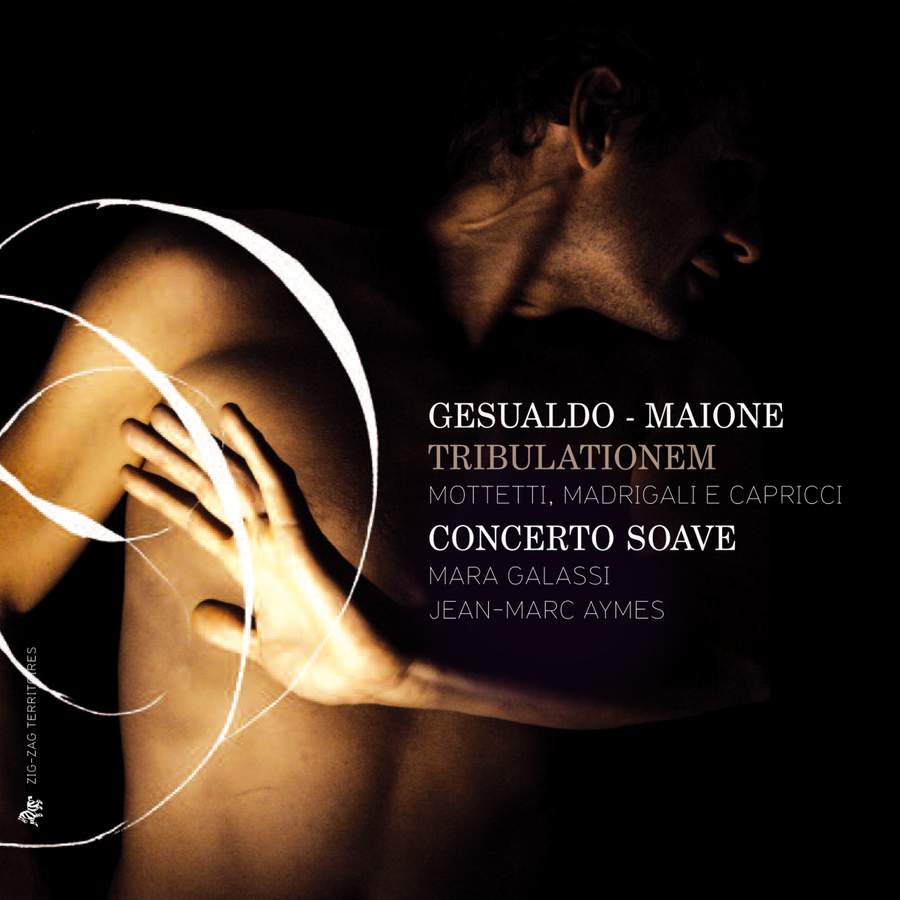 This programme does full justice to the modernity of Carlo Gesualdo, Prince of Venosa (1561-1613), covering both his sacred music and his madrigals. It reproduces all the subtlety and chromaticism of his music, strictly respecting the temperament used in the composer’s time.An added attraction of this disc is that it alternates the Prince’s works with the music of his contemporary Ascanio Maione, scored for harp, harpsichord and organ. A timely commemoration of the 400th anniversary of the death of Carlo Gesualdo, this recording showcases the outstanding artistry of the ensemble Concerto Soave and its director Jean-Marc Aymes. 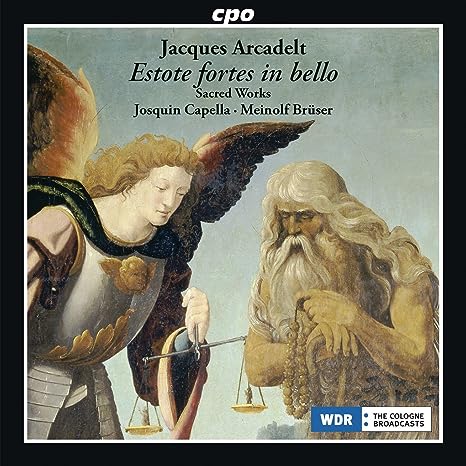 The musical forces of the Josquin Capella led by Meinolf Brüser perform the sacred works by Jacques Arcadelt on this new CD. Josquin Capella is vocal ensemble famed for its mastery of the high Renaissance – spanning the late fifteenth and sixteenth centuries.Arcadelt celebrated success during his lifetime above all with secular music and today is regarded as one of the founders of the Italian madrigal. However, he did invest a significant amount of time writing sacred music which is lesser known. 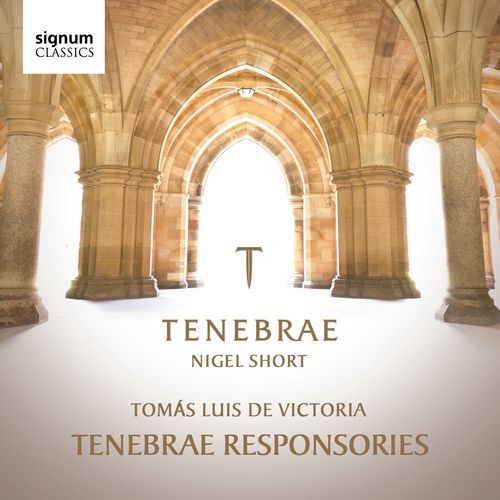 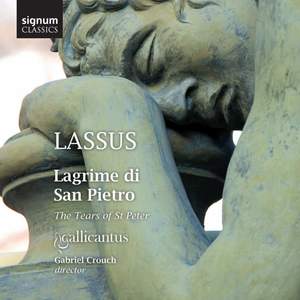 Orlande de Lassus, Europe’s most famous musician during his lifetime, created nothing finer than the Lagrime di San Pietro, a collection of twenty spiritual madrigals and one motet for seven voices; A cycle of intense reflections on the sorrows of St Peter following his denial of Christ, it was assembled shortly before the composer’s death in 1594 and dedicated to Pope Clement VIII. Into this collection Lassus pours every dramatic nuance and piece of harmonic invention he could possibly muster, hurling the listener through the stages of Peter’s rage, remorse and resignation, and concluding with a motet that presents Christ’s response to the world. See more at: http://www.signumrecords.com/catalogue/new-releases/lassus:-lagrime-di-san-pietro/sigcd339.html#sthash.oGshc0mR.dpuf

Gallicantus (Latin for ‘song of the rooster’) add to their already impressive catalogue of works on Signum with this new recording. Their previous release The Word Unspoken: Sacred Music by William Byrd and Philippe de Monte was picked as a critics' choice disc 2012 by BBC Radio 3 CD Review.

The Lagrime di San Pietro was the last of Lasso’s enormous output, finished only six weeks before his death. The work is a group of twenty spiritual madrigals (madrigali spirituali) representing the remorse of St. Peter for having denied Jesus. Penitential and pessimistic in tone, the Lagrime are both an emblem of the religious severity of the Counter-Reformation and possibly a reflection of the composer’s realisation of his own impending death. The text is taken from a longer, but fragmentary, work by the poet Luigi Tansillo (d. 1568), written in the classic ottavo rime of Italian narrative poetry (rhyme scheme ABABABCC). In adapting Tansillo’s poetry, Lasso, like most of his contemporaries, composed settings for already existing poems. As a form, the madrigale spirituale flourished during the Counter-Reformation and is a cross between the purely liturgical Latin motet and the secular madrigal. Written in Italian on contemplative and religious themes, the madrigali spirituali were freely composed (i.e. not based on pre-existent plain chant). Their musical style was often more restrained and less florid than that of their secular counterparts. Biblical texts were sometimes set in the vernacular as were secular love poems, reworked to substitute the Virgin Mary for the beloved lady of the original. Lasso’s selection of Tansillo’s verses creates a small drama that builds to an intense emotional climax. The twenty madrigali spirituali, with a concluding Latin motet, represent different stages of St. Peter’s unrelenting remorse and self-recrimination, even as an old man. The initial verses (I-VI) portray the saint as an old man. Remembering his terrible failure, he imagines the eyes of Jesus, as he hangs on the cross, accusing him in an exquisite variety of ways. Verses VII and VIII "quote" Christ’s unspoken diatribe as imagined by the saint. Verses IX-XIV are Peter’s contemplation of the crucifixion and Christ’s suffering. In verses XV-XX, the saint cries out in utter despair, praying for his own death, even though he doubts he deserves salvation. The concluding motet is no more hopeful in spirit; Christ calls from the cross on us to look upon his suffering, which is, nevertheless, far less painful than mankind’s ingratitude. All of the madrigals are composed for seven voices, a fairly unusual combination for the period, but one that allowed the composer to vary the musical texture of this long work to adapt to the meaning of the text. Sometimes he splits the chorus into two antiphonal groups, a technique that was particularly popular in Venice in the works of Lasso’s contemporary, Giovanni Gabrieli. Other passages are composed in homophonic or chordal style. Lasso achieves musical unity in this long work by creating a tonal arch, or unifying system of tonal relationships among the 21 separate madrigals. The music represents the height of Lasso’s intricate contrapuntal style. As in many of the composer’s works, and the works of Italy’s so-called "Mannerist" composers, certain melodic and contrapuntal figures were codified to represent devices used in rhetoric and oratory. During the late Renaissance, the system of imbuing musical patterns with textual and affective meaning, known as musica reservata, was, even at the time, a highly refined process, decipherable only by the most learned musicians and cognoscenti. There was even a treatise on the topic of rhetoric in music by Joachim Burmeister. This was a period when composers were increasingly concerned with issues relating to the combination of music and poetry. In its intense, dramatic, psychological portrait, the complex contrapuntal ’"rhetoric" of the Lagrime reflects Lasso’s particular care in conveying the meaning and emotion of each line of text through the music. In addition, the setting of the text is generally syllabic with each phrase repeated several times. There are none of the long, flowing melismata that characterize secular madrigals of the period. Clearly, understanding the words is critical. For some of Lasso’s younger contemporaries, most notably Claudio Monteverdi, the idealised wedding of music and poetry would bear fruit in a totally different direction, in the development of monody (recitative over a simple basso continuo) and the birth of opera.