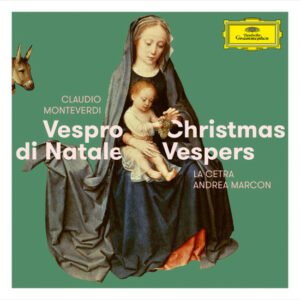 This show is currently free to all visitors, as a special gift from Millennium of Music. Enjoy!

Our special Christmas centerpiece is the new reconstruction of what Monteverdi wrote in a 1616 letter was the “hard work on a Mass for Christmas Eve” with the brilliant reconstruction by conductor Andrea Marcon.

NOTE: All of the music on this program comes from the new Deutsche Grammophon release featuring La Cetra and the Basel Vokalensemble conducted by Andrea Marcon. It is CD 486 2977.

On 29 December 1616, Claudio Monteverdi wrote to the poet Alessandro Striggio — who was also the secretary to the Duke of Mantua — to apologize for his late reply, which he attributed to “the hard work that had to be done on the Mass for Christmas Eve, for what with composing it and copying it out I had to give up the entire month of December, almost without a break”. By 1616 Monteverdi had been the maestro di cappella at St Mark’s for three years. Here the Christmas festivities placed a particularly heavy burden on his shoulders. Not only did he have to compose a new polyphonic Mass, he also had to write numerous other works for the Solemn Vespers on Christmas Eve at St. Mark’s as well as for Christmas Day itself at San Giorgio Maggiore, and for additional services associated with the Christmas liturgy. The musicians of the Doge’s cappella would then be joined by famous soloists who were in the city for the opening of the new opera season, while other singers and instrumentalists were similarly enlisted for these magnificent celebrations.

The Vespro veneziano that Andrea Marcon has assembled for this new recording is inspired by the resplendent sounds of the music that was performed at the great Christmas Vespers in St. Mark’s in the presence of the foremost dignitaries of La Serenissima and a large audience of aristocrats and visitors from across Europe. This reconstruction features works from various printed anthologies of works by Monteverdi and his contemporaries and presents the sort of Vespers that might have been heard in Venice over the Christmas period during the long incumbency of “il divino Claudio” as maestro di cappella at St Mark’s — he held the post from August 1613 until his death on 29 November 1643.

LA CETRA, renowned early music choir and orchestra based in Basel (Switzerland), are accompanied by a very special organ for this recording which shaped their way of singing and playing, intensifying the affects, the chiaroscuro, the harmonic tension and the dynamic palette, producing a surprisingly modern, majestic, bright and vivid sound-image of the music of Monteverdi and the Venetian 17th century.