You are here: Home / Playlists / More for Christmas

A Christmas recording from Denmark, and a rare Christmas mass by a nearly-unknown English composer from the time of Henry VII.

Each year, as the days grow shorter and temperatures a little colder, we begin to experience a sense of anticipation and excitement, as the holidays draw near. 'Tis the season for delicious smells, heart-warming sights, and joyful sounds; no other time of year is as filled with musical celebrations and good will, when even strangers come together and raise their voices in song!

New for this year, composer and arranger Michael Bojesen has selected hymns and carols from across the centuries and around the world, adding a touch of extra holiday joy with the soaring descants of Michala Petri's recorder, shining brightly like the star atop a Christmas tree.

From timeless favorites like "It Came Upon the Midnight Clear", "God Rest You Merry, Gentlemen" and "O Come, O Come, Emmanuel", to less-familiar carols from other lands like the Basque "Gabriel's Message", the Polish "Infant Holy, Infant Lowly" and the Czech "Zither Carol", Bojesen's arrangements of these beloved melodies with lift your spirit.

Enjoy this special musical celebration of the season, with the Danish National Vocal Ensemble and Michala Petri.

OUR Recordings is proud to present this album in the highest sound quality format commercially available- the SACD, DXD –format, engineered by the internationally acclaimed producer Preben Iwan, in the perfect acoustics of the Danish Radio Concert Hall. 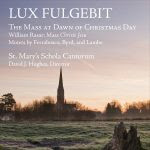 The Schola Cantorum of St Mary’s Church in Norwalk, Connecticut, and the St Cecilia Society announce the release of the CD Lux Fulgebit, a recording of the Christmas Mass at Dawn, featuring the premiere recording of the 16th century English composer William Rasar’s Mass Christe Jesu. The Schola is under the direction of St Mary’s organist and choir master David Hughes.

Taking its title from the first words of the Introit of the Mass at Dawn, the CD includes motets by William Byrd, Alfonso Ferrabosco, and Walter Lambe. The entire CD presents a Mass “in context,” including all the Gregorian propers, as well as the Scripture lessons, Preface, Collect and Post-Communion.

“Not only is this the first recording made by the St Mary’s Schola Cantorum, to our knowledge it is the only William Rasar composition ever recorded. If not for the manuscript of his Mass, this gifted composer might have been lost to history. In addition, the Propers for the Mass at Dawn of Christmas Day are beautiful but not frequently recorded, and we believe they deserve a wider audience.

“Pre-Reformation English composers are widely recognized as having produced extraordinary music,” said Charles Weaver, associate director of music at St Mary’s and a Schola musician. “The Tallis Scholars and other ensembles, for example, have popularized music from English composers such as John Taverner and Robert Fairfax. We believe Rasar’s Mass deserves to be ranked among pieces by the great composers of this period.”

Lux Fulgebit captures the musical splendor of the traditionally-oriented liturgical life at St Mary’s, recognized as a leading parish in renewing the worship of the Church. The Schola Cantorum is the heart of a multi-faceted sacred music program at the parish, that includes a children’s choir, adult volunteer choir and Spanish-speaking ensemble. All are geared toward enhancing the many Masses at the church, done in English, Latin and Spanish, and all at the High Altar, facing East.

St Mary’s pastor, the Rev. Richard G. Cipolla, believes the recording will not only be appreciated by those who are music lovers, but help open up the traditional form of the Roman Rite to those who might not be familiar.

“One of the most important ways of restoring beauty to the Mass is through the use of music. The music of the Mass must be sacred music, not merely religious music, because the Mass is the icon of the worship of God in heaven. At St Mary’s, we offer Mass adorned with music written specifically for it by some of the greatest composers in history. Lux Fulgebit will help more people experience the beauty of Rasar’s music and the ancient and venerable Tridentine Rite.”

The St Mary’s Schola Cantorum is a professional ensemble of five talented musicians, proficient in singing the most complex polyphony in the canon of Western sacred music: soprano Elizabeth Baber Weaver, mezzo-soprano Judith Malafronte, countertenor Terrence Fay, tenor Richard Dobbins and bass Charles Weaver. The St Cecilia Society is the support organization tasked with funding the program, and is under the chairmanship of Thomas B. Heckel.

from Early Music: The Missa Christe Jesu is the sole surviving work of William Rasar, who was a clerk at King’s College, Cambridge, until about 1515. This means that we know one thing about him rather than nothing. The latter is not unusual for composers whose works, like this piece, survive in the Peterhouse partbooks, where it lacks its tenor part. But in addition to actually knowing something about the composer, his single surviving work exists complete, as it is also in the Forrest-Heyther partbooks. All the more surprising that, with the current flurry of interest in Peterhouse repertory, this is the premiere recording of Rasar’s mass. It is a revelation. The choir to reveal it to the interested musical public is St Mary’s Schola Cantorum, a professional quintet which sings for services at St Mary’s Roman Catholic Church, Norwalk, Connecticut. Now, I am rather vain about my knowledge of American geography, but I have humbly to confess that I had never previously heard of Norwalk, which is situated between New York and New Haven. I am delighted to have made good my ignorance in the context of this premiere commercial recording of a unique work of the highest music quality.
The mass is sung in the context of the complete service, with bells, a celebrant and appropriate plainchant. As usual with English masses of the period there is no polyphonic Kyrie, but unusually the entire text of the Credo is set. The musical idiom is perhaps best described as Eton Choirbook meets Franco-Flemish. That said, the Gloria is almost alarmingly abrupt, seemingly over as soon as it has got going. Subsequent movements are less succinct, but overall the mass is by no means expansive in style. Nevertheless there is much fine music for the listener to enjoy and the singer to relish. The offertory motet is what would seem to be the premiere recording of Mirabile mysterium, a fine work by the elder Alfonso Ferrabosco which the Schola has done well to bring into the public domain. There are two communion motets. The first is Byrd’s three-part Quem terra, pontus. Although this is only its second complete commercial recording, the last of its five sections is a setting of Gloria tibi trinitas well known as an anthem in English cathedrals and similar choral foundations at men-only evensongs when the layclerks sing without the trebles. The other is Walter Lambe’s five-part Nesciens mater, one of the most popular pieces from the Eton Choirbook.

The performances by the five voices are interesting, possessing more an intimate quality of a chamber quintet and certainly not raising the roof as some choirs can and do in this repertory. The timbre of each voice is clearly audible, but they blend well enough, and manage to differentiate the intimacy of the sections for reduced scoring with the full sections. The individual singers certainly do not have the sound of regular early music singers, but they are sensitive to the idiom of the music. In a critical review I feel I have to observe that the bass can sound a trifle plodding, though this does not impede the momentum of the music. Indeed, it is these very qualities, outside the regular early music box, that convey the aura of a real liturgical ensemble singing real liturgical music. 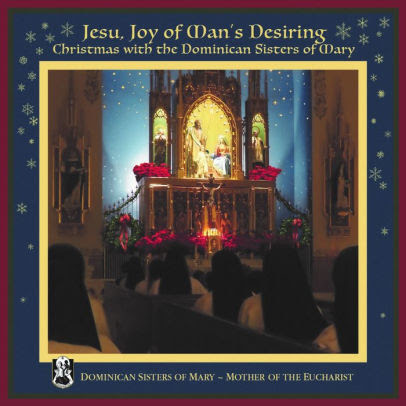 The Sisters will top off their 20th Anniversary year with a glorious new Christmas album Jesu, Joy of Man's Desiring. Recording in the ethereal acoustic at their Motherhouse in Ann Arbor, this sublime offering will include some of the Sisters' favorite carols as well original compositions which until now have been heard only in their chapel each year at Christmas. Now widely available to share, the Sisters will release this recording internationally with De Montfort Music through Sony Classical.

Christmas Proclamation
Jesu, Joy of Man’s Desiring
Wake, Awake, For Night is Flying
Sleep, Little Jesus
Carol of the Bells
Emmanuel
Snowflakes
Angels We Have Heard on High
Away in a Manger
Adeste Fideles
Joy to the World
Gaudete
Of the Father’s Love Begotten
Madonna’s Lullaby
Gabriel’s Message
We Wish You a Merry Christmas