Estonian folk hymns and Runic songs; crossover folk ensemble Polaris takes us to Scotland and Norway; and the rugby players who formed a group performing songs from the Pyrenean part of old Gascony. 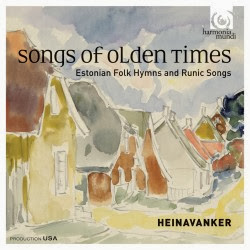 From Classical Modern Music: When you hear a body of music previously unknown to you and the performances are very good, it's sometimes something like meeting up with a relative later in life whose path you never crossed. There is something so familiar about that person, yet you have never seen her or him before.

That's the feeling I get listening to the choral group Heinavanker and their album Songs of Olden Times, Estonian Folk Hymns and Runic Songs (Harmonia Mundi 907488). This is a terrific group and the music. . . I have never had the pleasure to hear the archaic vocal works of old Estonia. As I listened I heard something I've never heard before, with echoes of Orthodox Chant, Gregorian Chant, choral music of Georgia and the Ukraine, Medieval Organum, Mongolian throat singing, all kinds of things it had some relation to yet so different it clearly was not a direct product of any of the others. And it's so pleasingly old that it sounds like it could be an old-in-the-new series of contemporary works. It isn't. The fact that Arvo Part hails from Estonia led me to search for things that reminded me of his work, but it isn't quite like that, either.

Heinavanker, which means in Estonian "The Hay Wain", is a vocal ensemble formed by local composer Margo Kolar in 1996. They sound as they must be, that is, totally immersed in the archaic chant style of the region. They sound phenomenal.

The music covers quite a bit of ground. The melodies range from strictly but evocatively chant-like to folkish song form and everywhere between the two. Harmonies have thirds fourths and fifths and sometimes move in parallel motion, sometimes not. There are occasionally drone elements and then the throat singing makes its appearance now and again, with mostly the whistling sort of technique employed to add color to the ensemble while others sing in normal voice.

This is music you don't forget easily. It haunts. It evokes a world we inherited but never knew about (certainly not in the US anyway) until the recorded medium began bringing world and time to our shores, to our listening ears and hearts. And even at that Estonian vocal music has not been around much here. This is a first for me at least.

Songs of Olden Times is all about discovery. It is about a music that lives on and sounds as much relevant to our musical beings as anything. It's so old it almost sounds new. It is extraordinary music. The performances are totally compelling. Grab this one and drift off to a new yet ancient musical world. 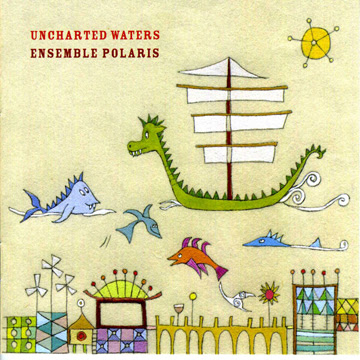 From Roots World:  I enjoy folk music that leans toward classical music, and vice versa. Over the past few years I’ve had the opportunity to review some strong recordings in this category from the likes of Annbjørg Lien’s string quartet, Fiolministeriet, and Zenobia. Ensemble Polaris is a welcome addition to this cadre of genre-blending musicians.

This Canadian ensemble draws from the folk music of Orkney, Russia, France, Sweden, and beyond. The arrangements constructed from this mostly-original material have a deeply classical feel, along the lines of the music from folk-inspired composers like Grieg, Bartók, and Dvořák. This leaning toward the classical is underscored by noting the ensemble’s Pipistrelle label is distributed by Naxos, one of the great classical music labels.

Ensemble Polaris uses an exotic mix of instruments including Swedish bagpipes, seljefløyte, jew’s harp, vielle à roue, and bass clarinet. These appear in interesting combinations, and it’s rare that the entire ensemble plays on any given track. A song may be performed simply with voice and guitar. Others might blend recorder, violin, bouzouki, and Celtic harp. Sometimes the lineup and timbre changes within the same song. As the album’s title, Uncharted Waters, suggests, there are combinations here that many of us have not encountered nor even considered.

The dance tunes are the highlights here. “Dry Toes Waltz” comes from central France, and the rhythmic tambourine and melodic hurdy gurdy make me think of Roma campfire. Where “Dry Toes” is completely danceable, “I Kopanitsa,” based on a Balkan dance, is off-balance in amazingly fun ways. My feet can’t quite find the steps, and yet my heart urges me to dance anyway. And the “Vals etter Vidar Lande” is a hardanger fiddle tune without a fiddle. Yet the munnharpe, accordion, and cello underneath wordless vocals somehow conjure up the spirit of the hardingfele in ways my ears intuit but my mind can’t quite grasp.

Even amidst all the changes in texture on this recording, the CD as a whole holds together extraordinarily well, with the track sequencing adding to the overall artistic vision.

Ensemble Polaris does indeed take the listener to uncharted waters. Yet while the geography may be unknown, a sure footing is still provided, allowing listeners to dance along with the uncertainty. This offering is a welcome blend of familiar-sounding music from northern European traditions combined with the classical composer’s 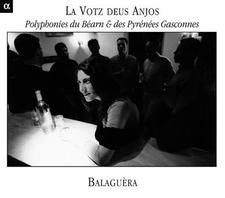 As inheritors of oral tradition, the nine singers of the Balaguera Ensemble interpret polyphonic songs from the Pyrenean Gascony. These songs will astonish the listener both by their sheer energy and daring harmony. The pieces presented here are popular songs, in the sense that they function like real "Spanish inns", each one being able to bring there a part of its topicality, of its history, of itself.

In the most intense contexts, fusion takes place beyond words. We end up forgetting the sentences, to retain only an assonance, an image, a cliché included in an overall theme. The inconsistencies of meaning that may be noted in one or the other of the texts are therefore irrelevant. What does this batèu (boat) kept in a pradèu (meadow) do if it is not that it "kills” (ends its meaning), and that beyond that, symbolism or psychoanalysis would certainly find their remainder there?

Beyond that, it doesn't matter that the text is sometimes truncated after two long stanzas. In this type of situation, the effort imposes its law on the speech or the episodes of the drama.
We only retain the essential: the argument, the expressiveness, the musical sensation, the collective vocal gesture. This is the journey to which Balaguèra invites us, in the heart of an ever-living music.