You are here: Home / Playlists / Back to France

Les Arts Florissants are back with Volume 3 of their “Airs sérieux et à boire” series; a remarkable tribute to the music inspired by the poetry by the Comtesse de la Suze; and a world-premiere recording of a ballet by Lully. 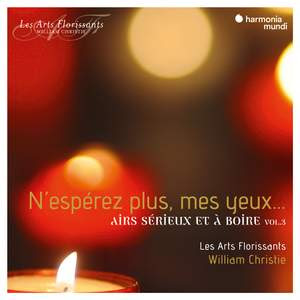 With this third volume of Airs sérieux et à boire, the ensemble Les Arts Florissants return to this genre whose refinement had marked the French musical landscape for over a hundred years.
By turns gallant, earthy, or spiritual, these vocal miniatures, prized at the French court, ushered in a ground-breaking style which opened the door to an endless variety of interpretations.
‘One can hardly find enough praise for the individuality of these inspired performers, for their skill to make the music animate the words ( . . . ) as they display a joyful unity of purpose. A unique event! ’ (Opéra Magazine).

If one had to name one single repertoire that Les Arts Florissants had brought to light, it would be the French air de cour. The very first recordings made by the ensemble already testify to William Christie’s love for this genre and to their vibrancy and brilliance.

Since 2015, a group of the most highly respected singers and instrumentalists on the current Baroque scene has undertaken to revisit this repertoire. The concerts of the first two series and the discs entitled “Bien que l’Amour” and “Si vous vouliez un jour”  (edited by Harmonia mundi) have been acclaimed across Europe and America. The adventure continues in 2020-2021 with a third volume conceived in the same vein, associating once again courtly arias and drinking songs by Étienne Moulinié and Pierre Guédron.

From the intimacy of the salon to the belligerency of court banquets, these sumptuous vocal works are without doubt the finest models of artistic refinement that the Grand Siècle has left us.

"This is the year that William Christie’s group Les Arts Florissants turns 40. Yet how can there be even a twinge of middle age about an ensemble that cheerfully imitate cows, sheep and birds, sing about sex and perform at one point squatting on the floor?" (The Times) 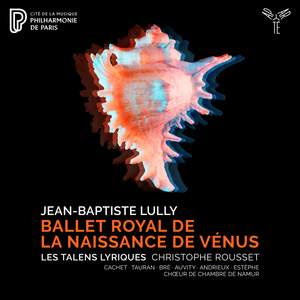 Written at the request of Louis XIV in honour of his sister-in-law, Henrietta of England, Le Ballet royal de la Naissance de Vénus was performed in 1665 with Henrietta herself as the goddess of love and youth.
In twelve entrées, this grandiose spectacle combining dancing, music and poetry served the power of the king, while attesting to the magnificence of his court. Musically very inventive, it shows the culmination of the ballet genre,  on which Lully was to draw in creating the tragédie en musique. To complete the programme, excerpts from Le Ballet royal des Amours déguisés (Armida's famous lament "Ah! Rinaldo, è dove sei?"), Psyché, Le Bourgeois gentilhomme and Le Carnaval - from the latter a piece recycled from Les Noces de village, a burlesque aria sung by the boastful village schoolmaster Barbacola, a basso buffo role that Lully wrote for himself.
From Planet Hugill: Whilst Jean-Baptiste Lully's name is forever associated with the development of French opera as tragédie lyrique from the 1670s, prior to this the composer cut his teeth writing ballets. He wrote around 25 such ballets for the French royal court, from 1654 to 1685, as well as developing the comédie-ballet with the playwright Molière. This is music which we often hear in extracted form, and there don't seem to be many of Lully's complete ballets on disc. But a new recording from Christophe Rousset and Les talens lyriques on the Aparté label enables us to hear Lully's complete Ballet royal de la Naissance de Vénus, which premiered at the Palais Royal (the Louvre) in 1665.

French court ballet is a curious form. First developed in the mid-16th century, the works combined poetry, sung and acted music and dance, along with visual arts, sophisticated sets and costumes. Plots were intended as the glue which held these disparate elements together, but also were designed to showcase the glories of the court or the particular monarch's reign. There was a participatory element, many of the dancers were aristocrats at court of great technical ability, whilst there would also be larger-scale ensemble moments.

It was during the 13-hour (!) Ballet Royal de la Nuit, with music by music by Jean de Cambefort, Jean-Baptiste Boësset, Michel Lambert and others, that premiered in 1653 in Paris that the 14-year-old King Louis XIV (whose dancing of the role of Apollo cemented his epithet as the Sun King) came to regard a young Italian musician and dancer, Jean-Baptiste Lully. Within a month, Lully had been made royal composer for instrumental music.

Lully wrote music for everything, hastily assembled events and grands ballets designed to showcase the talents of the young court. And we should remember it was young. When Lully turned away from ballet toward opera in 1670 (and King Louis XIV gave up dancing), the king was still only 32. Over the space of 20 years he would take part in 25 court ballets in 70 roles, both comic and serious. The librettist for that ballet back in 1653 was the poet Isaac de Benserade (1613-1691) with whom Lully would collaborate on a whole series of ballets, including Ballet royal de la Naissance de Vénus, all clearly structured and themed. The instrumentalists would be based around a five-part string group with wind players taken from the King's various ensembles. The scores evidently rarely mention instrumentation, so modern interpreters have some latitude.

The vocal and choral music is interweaved with the dance, so that each group of dances is preceded by short vocal moments. This would be developed further by Lully in his operas, so that each act of the opera would often end in a grand danced and sung moment which was linked to the plot.

On this disc we hear the Ballet royal de la Naissance de Venus from 1665, which was one of the more important ballets from the 1660s and was a compliment to the king's sister-in-law, Madame (wife of his brother), Henriette, the youngest daughter of King Charles I of England (who was married to King Louis XIV's aunt). It was moderately successful, receiving nine performances. Madame (age 21) appeared in the first scene, being birthed as Venus whilst her husband, Philippe, Duc d'Orleans (age 25) was the Morning Star in the second scene, and the king (age 27) finally appeared as Alexander the Great in the final scene (with Madame as Roxana). In all there were 106 different roles performed by 96 individuals, 20 musicians and 14 singers! From the libretto we know the names of the musicians, how many there were and what instruments some of them played.

I can think of no better way of getting introduced to Lully's ballet music than via this compact yet imaginative work in this wonderfully engaging, stylish and characterful performance. Granted, it is tricky to imagine the sheer spectacle of the original, but there is plenty of interest and contrast in the music.

As the ballet does not fill a full disc, we are also treated to a short sequence of music from Lully's other ballets, from the Ballet royal des Amour deguisés (from 1664), Psyché (his most developed comédie-ballet with Molière from 1671), Le Carnaval (from 1675) and Le Bourgeois gentilhomme (again with Molière from 1670).

Michel de Marolles said 1656 that the ballets featured 'that which is enjoyable, rare and marvellous' - precisely.

Marc Mauillon, baritone
Angélique Mauillon, harp
Myriam Rignol, viola da gamba
With performers' increased focus on the music of the French Baroque, it's rare to find an album exploring a completely unknown repertory, but that's what's happening here, and although this is certainly a specialized release, it's of great interest to anyone. The main feature is that most of the music consists of settings of poetry by the titular Comtesse de la Suze, Henriette de Coligny. Although she chose to use it as a pen name, her Comtesse de la Suze title is more than a bit ironic, inasmuch as she obtained a kind of divorce from the Comte de la Suze at a time when such a thing was rarely done in France. The Count was her second husband; her first marriage, too, was unusual, for it was made in the name of love, and it is love that inspired Henriette as a poet, love as expressed in bold but inward strokes, with striking imagery that inspired a variety of composers. Many of the pieces, designated as chansons, come from several 17th century volumes called the Livre d'airs des différents auteurs, and the composers, except for a few who wrote the instrumental pieces, are all but unknown. Baritone Marc Mauillon contributes suitably quiet, gentle readings, and another major attraction is the variety of harps played in the continuo by his sister, Angélique Mauillon. Harmonia Mundi delivers excellent sound from a small concert space that is completely appropriate to the music; the atmosphere is intimate without being too close. One might have wished to know more about the circumstances in which this chamber music was performed, but it's highly listenable on its own terms, and for those interested in the history of literature by women, it's an absolute must.
CD 1:
CD 2: