Considered perhaps the finest Monteverdi interpreter of our time, the Italian director of the Concerto Italiano guides us through the vast 1610 Marian Vespers. 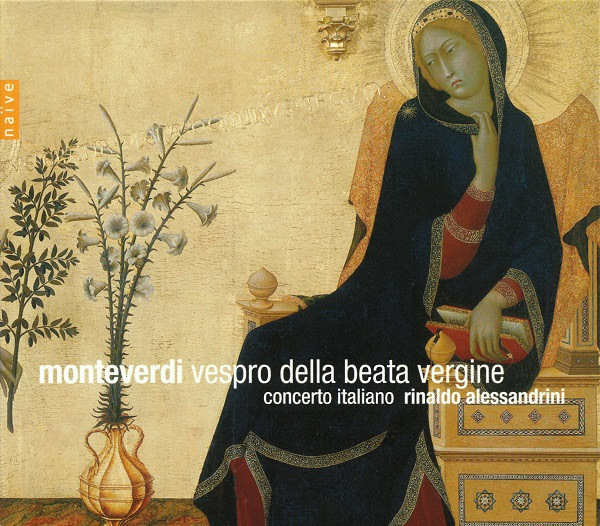 From Music Web International: Rinaldo Alessandrini has made his international reputation largely through performances of Monteverdi, particularly the motets, so this new recording of the composer’s greatest choral work was bound to be eagerly awaited. That critical opinion has been somewhat divided should not be a great surprise. Alessandrini invites this sort of response; his highly provocative approach to the many historical and performing aspects being bound to divide listeners.

In his typically forthright sleeve-note, he tells us straightaway that he is firmly in favour of the choir singing one to a part. This is nothing new, of course, with Philip Pickett and Andrew Parrott both adopting this approach. Indeed, Parrott’s excellent super-budget version on Virgin Veritas probably provides the main comparison for this new recording. So, if you regard the work as a grand Renaissance choral blockbuster, best stick to Gardiner (DG, his later version) or Jordi Savall (also Naïve) who both use much bigger, though extremely disciplined, choral forces to great theatrical effect.

More controversially, Alessandrini does away with the plainsong antiphons that most other versions adopt, and for whose inclusion there is historical evidence. He also uses his small hand-picked choir of twelve to vary some of the tempos, rather as Paul McCreesh does in his similarly scaled down Bach Matthew Passion. This works well in bringing out the dance-like origins and character of, say, the ‘Ave Maris stella’, but some may feel that other sections, including parts of the ‘Magnificat’ or ‘Audi caelum’ lack a certain weight or gravitas. At least Alessandrini sticks to the now-standard published order for the work, so if you have access to the excellent Oxford Edition, edited by Jeffrey Kutzman (OUP, 1999) you can follow Alessandrini’s attempts at ‘authentic’ ornamentation and his unique approach to instrumentation.

Indeed, the way the instruments, including punchy sackbuts and reedy organ continuo, cut through the texture is one of the most exciting things about these discs. The ‘Sonata’ floats gloriously out in Gabrieli-style splendour, the resonant acoustic helping rather than hindering here. Elsewhere, though mentioning individual voices in so intimate a setup is invidious, one marvels at Monica Piccinini and Roberta Invernizzi’s sensuous, almost operatically ethereal ‘Pulchra es’, and the earth-shaking basses in the transposed ‘Lauda Jerusalem’.

All in all, there is much here to be thrilled and moved by. Many music lovers I know simply will not entertain the one-to-a-part philosophy, but when it is done as persuasively as here, where the sheer vocal virtuosity allows the many taxing rhythms and quirky ornamentations to be heard with crystal clarity, then it’s hard not to be won over. I would certainly not make it my only Vespers, in the same way I would not make a small-scale historically aware Beethoven 5 my only version. I would not be without the theatrical grandeur of Gardiner or Savall (whose mid-price version interestingly includes one Rinaldo Alessandrini playing continuo), but there are so many details teased out by Alessandrini that make this new version very compelling indeed. 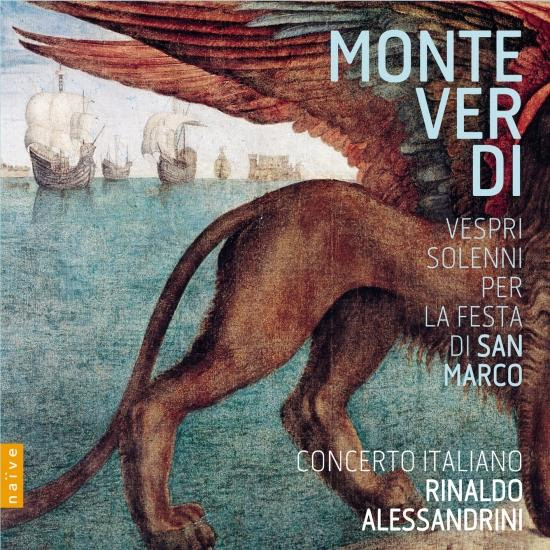 From The Guardian: When Monteverdi moved from Mantua to Venice in 1613, to become maestro di cappella at St Mark's, he set about raising musical standards in the choir of which he took charge. The Selva Morale e Spirituale, published in 1640, together with the Missa e Psalmi published after his death, anthologised the liturgical settings he made for St Mark's. And it's music from those collections, as well as the 1610 Vespers, (which had effectively brought together what he had achieved in Mantua), together with instrumental sonatas by his Venetian contemporaries replacing the repeats of the sung antiphons, that have been used in this recreation by Rinaldo Alessandrini of a grand vespers service as it might have been performed in St Mark's under Monteverdi's direction. The recording was made in Mantua, in the basilica of Santa Barbara, the church for which the 1610 Vespers were originally composed, but which serves as a much more than passable substitute for St Mark's itself, and allows Alessandrini and his ensembles of singers and instrumentalists to achieve many of the spatial effects and changes of perspective that were such a feature of music in Venice. It's a real treat, intelligently conceived and immaculately executed.

From Classical Net:  If anyone can bring something new and exciting to the iconic work, Rinaldo Alessandrini with his Concerto Italiano can. The Vespri Solenni per La Festa di San Marco may have been written by Monteverdi as a demonstration of his skills in support of his attempts – successful – to move to the more prestigious post of Maestro di Cappella at San Marco, Venice, in 1613. He was tired of the provincialism of the Mantovan court, and of being underpaid; and perhaps of the swamps, humidity and mosquitoes.

Alessandrini successfully marries two qualities of the collection of 20 individual (yet united) sacred works which make up the Vespers; they last a full 80 minutes on this recording.

The first of these musical qualities brings out the dignity, splendor and richly-colored nature of the work… a slower-than-usual tempo, and sonorous deep brass, considered, studied yet deft, uplifting singing from all of the soloists. Comparisons to the immensity of the San Marco basilica aside, listeners will still have the impression of Monteverdi's well-wrought architecture evoked by Alessandrini. His sense of the Vespers' structure, and of the inevitability as it moves through its phases, is clear and pleasing. He lets tempi and phrasing make their impact, not volume.

The second quality is subtler. The Vespers are perhaps best known to us as a highly rhetorical emblem of the culmination of the Italian Renaissance and inception of the Baroque. Yet here Alessandrini and his forces have conferred upon it a sense of how it might have sounded at the time – without the aura of a "special performance"; it's a functional act of worship. This realism is never pedestrian or mundane. Yet it is particularly forceful: we feel that we are there next to the music-making, rather than being presented with some sort of monument. But this is not a "stripped down" performance, designed to be "gritty" or devoid of delight by minimizing the work's profundity.

Concerto Italiano and their harpsichordist director Rinaldo Alessandrini celebrate 30 years this year: they made their debut in Rome with Cavalli's La Calisto in 1984. Despite numerous awards, otherwise successful recordings and a strong following and even stronger reputation, there is nothing boastful or overblown in this recording. Indeed, there's almost a note of humility in the way they have the music unfold. This is perhaps best exemplified in the way in which there are few spuriously-created high-points; yet no mere transitions. Although there are, as said, 20 separate "numbers", Alessandrini has successfully made them all work together as a whole.

But it's not a symphonic construction. Even though the addition of instruments to attain rich polychorality was new in Venice (it has already been achieved in Rome, but with choirs only), Alessandrini never attempts to thrust either vocal or instrumental sound at the listener. The result is that one is constantly aware of the substance of Monteverdi's text and melody, of the harmonies and relevance the ones to the others; and not of a mere spectacle.

Yet there is nothing spare or slim in this performance. Its impact is as full as are the intricacies of the contrapuntal, and confessionally rhetorical writing. The usually stunning end of the "Magnificat á 8" at the end of the entire Vespers, for instance, is as pleasing here as in any other recording. But it's not over-rhetorical or unnecessarily dramatic. Nor, for that matter, is this interpretation an attempt at wry understatement. In those senses it seems very genuine, authentic.

In support of this approach there is an evenness of dynamic and tempo. Abandoning the dubious idea of "high points", Alessandrini's conception emphasizes the sense of Monteverdi's having written a work whose devotional impact is derived from consistency as much as from the amazingly inventive melodic and harmonic new world, which it is. There are (good) surprises in the performers' discrimination between one passage and the next (from the opening "Selva Morale", the "Dixit Dominus" Psalm 109 [tr.3], for instance). Its dialog has almost operatic tones – though operatic because of the import of the text, not the texture, or any dubious and unnecessary rhetoric.

Moreover, Alessandrini chose to record the Vespers in the church of Santa Barbara in Mantua. Further, he did not site the choirs in that church's two galleries: he feels that such an emphasis on spatiality is appropriate when you are there. Though in a recording, it detracts from the many other impacts which Monteverdi makes – without aids. The result is highly satisfying. The music takes all our attention. The acoustic is interesting and full enough to support the composer's grand design.

With the single CD comes a film by Claudio Rufa on DVD lasting 50 minutes, "L'umano e il suo divino, Alessandrini Dirige Monteverdi" ("The human and its divine, Alessandrini directs Monteverdi"). It's a compelling documentary with subtitled commentary in English, Italian and French. It examines the enterprise of recording the work in the church at Mantua with a relatively detailed examinations of how the Vespers suited the acoustic, layout and architecture of that church. There are also sequences recreating relevant contemporary meals, musicians and researchers in informal but focused discussions of the relationship between voice and instruments (and between instruments, and instrument sections) that Monteverdi was aiming for and the context of the work; and long sequences of the musicians performing.

Alessandrini's expertise, vision, courage and insight into the mind and spirit of Monteverdi set this recording apart from the many dozen otherwise available. He has managed to infuse his performance with a modern sensibility. The interpretative specifics (ornamentation, instrumentation, balance and pace) are nevertheless faithful to Monteverdi's ambitions and success with this glorious work. Turning his back on the spuriously spectacular and rhetorical, Alessandrini and his musicians have produced what successfully melds modesty with authority.

If he does nothing else, Alessandrini demonstrates that the Monteverdi Vespers are as amenable of multiple interpretations as any other work. And that it's a work that can be truly loved – on a scale analogous to that intimacy with which one loves a Mozart sonata or an Elgar symphony. The booklet contains brief notes and the text in French, Latin and Biblical English. This CD and DVD not only represent good value for money, but – given the outstanding level of research, understanding and musicianship of Alessandrini and his forces, who share his conception – should immediately find a place on the shelves of any lover of this work, no matter how many other recordings s/he may already have. It is one to return to.