NOTE: All of the program this month feature recordings that are part of the expanded Naxos Distribution family. Recent recordings including the beautiful Marian Vespers of Alessandro Melani. 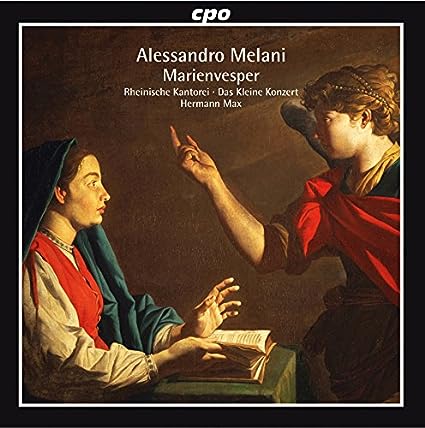 Although Alessandro Melani's (1639-1703) significance as a composer of operas and sacred oratorios before Alessandro Scarlatti was recognized quite early, his numerous sacred compositions have remained largely unknown. Church music was his domain, yet he regularly wrote operas that brought him fame. All his Vespers compositions have a festive character and were probably performed at one of Rome's finely endowed churches. The present selection aims at conveying an impression of the high rank of these works. Little is known about Melani’s life. Born into a family of musicians in Pistoia in 1639, he is documented as the chapel master at the Basilica of Santa Maria Maggiore at the very latest in 1667. In 1672 he moved on to San Luigi dei Francesi, where he worked until his death. As we see, church music was his domain, and yet he also regularly wrote great operas that made him famous (cf. the cpo release of his mini-opera Europa: 4481639). All the Vespers compositions by Alessandro Melani for one or two choirs, vocal soloists, and basso continuo brought together here have a festive character and were probably performed at one of Rome’s finely endowed churches, possibly in Santa Maria Maggiore or San Luigi dei Francesi during his tenure as chapel master. Soloists of the Rheinische Kantorei interpret the Vespers of the Blessed Virgin and its many challenging solo parts with their hallmark excellence together with the Kleines Konzert under Hermann Max. 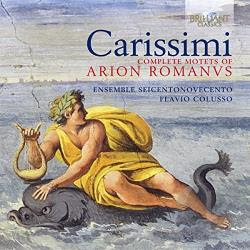 Giocomo Carissimi was one of the most significant composers of 17th century Rome, he was especially known as the creator of the Oratorio, which he developed into substantial dramatic works for vocal soloists, choir and orchestra. His complete Oratorios are available on 9 CD ‘s on Brilliant Classics. Performed by the Italian Early Music group Seicentonovecento, conducted by Flavio Colusso, who received great critical acclaim in the international press for their recording of Carissimi’s complete Oratorios.Booklet includes extensive liner notes, biographies and photos.

One of the most significant musical figures in mid-17th-century Rome, Giacomo Carissimi was a prolific composer of motets and cantatas, who also greatly influenced the developments of the Latin oratorio. This set brings together his 28 motets that were published under the title Arion Romanus by Giovanni Battista Mocchi, a student and loyal admirer of Carissimi. Arion was an ancient Greek bard and musician, who, in Greek and Roman mythology, was thrown overboard by pirates and rescued by a dolphin. In the liner notes that accompany this collection, the authors draw fascinating parallels between Arion and Carissimi himself: both were accomplished, charismatic and influential artists and musicians, and just as Arion was plunged into the depths of the sea, Carissimi explored the depths of the sacred music tradition to create a perfect synthesis of spiritual contemplation and intense emotional expression. The motets from the Arion Romanus collection also showcase his mastery of a wide range of formal structures, from the concertato to the madrigal.

Carissimi’s beautiful motets are brought to life here by the pioneering Ensemble Seicentonovecento, who regularly present world premiere recordings and performances of both new works and unpublished masterpieces from the past. Their conductor and founder member, Flavio Colusso, is also a renowned composer with a special affinity for sacred music. - 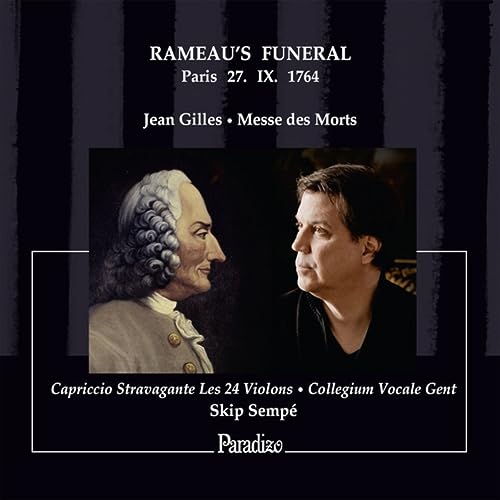 One exciting trend in early music is the detailed re-creation of musical events from the past, using documented works to set the scene and reveal some of the repertoire and practices of the time. For this album by Skip Sempé, Capriccio Stravagante Les 24 Violons, and Collegium Vocale Ghent, the subject is the funeral service of composer Jean-Philippe Rameau, which occurred on September 27, 1764, in Paris. This 2014 album is a commemoration of the 250th anniversary of Rameau's death, but beyond that significance, it is a fascinating study of how a great French musician was honored at the close of the Baroque era. The Messe des Morts of Jean Gilles, already in use for 60 years, was performed in a special updated version for the occasion, probably arranged by François Rebel and François Francœur, and excerpts from Rameau's Castor et Pollux and other musical references were included in the pastiche. Since Gilles' Requiem was frequently given for the obsequies of royalty and dignitaries, it reflects the conservative tastes of the Ancien Régime much more than it says anything about Rameau and his innovative music. All the same, this is a fascinating presentation of a piece that was a classic Requiem in its day, albeit adapted to the instrumentation and practices of the 1760s, and the live performance in the Oratoire du Louvre gives the music the spaciousness and resonance that one imagines was heard at Rameau's memorial service.