NOTE: All of the program this month feature recordings that are part of the expanded Naxos Distribution family. A new recording of Dufay’s masses written for the fateful year of 1453 is one example of recent releases.. 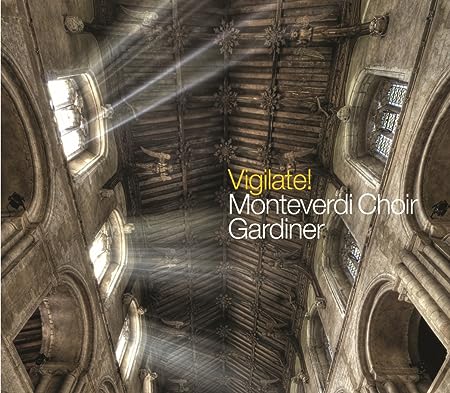 This disc forms part of the celebrations of the fiftieth anniversary of the Monteverdi Choir which gave its first concert in March 1964. Sir John Eliot Gardiner leads the choir in repertoire with which, to the best of my knowledge, they have not been greatly associated in recent years on disc. That said, judging by Gardiner’s introductory note they’ve been performing these and other similar pieces in concert. For this programme the Monteverdi Choir consists of 27 singers (9/6/6/6), though I’m not sure if all the singers take part in every piece. However, the ensemble is larger than, say, The Tallis Scholars or The Sixteen.

As Kerry McCarthy points out in the very interesting booklet note, many of the composers here represented formed part of a chain of tradition: Tallis taught Byrd who, in turn, had Morley, Philips and Tomkins as pupils at various times. However, what unites them just as strongly, it seems to me, is that all of them lived in very turbulent times when it could be very dangerous to find yourself on the wrong side of the Catholic/Protestant religious divide. Even Thomas Tomkins was not immune from this risk even though he lived much later than the other composers. His long reign as Organist of Worcester Cathedral was brought to a very abrupt end when, during the English Civil War, the Puritan forces occupied the city and forcibly did away with liturgical music.

So perhaps it’s not surprising that much English religious music of this period should be quite intense in nature and that intensity is brought out frequently here. The performances are often very different from what one might expect from, say, the Tallis Scholars. For example, Robert White’s Christe qui lux es et dies alternates verses sung to chant and verses where the chant is embroidered with polyphony. Given the derivation from chant some listeners may feel that the singing is a bit too moulded for comfort. Others again might feel that this moulding imparts a welcome expressiveness to the music. I’d incline towards the former viewpoint though I find much to admire in this expertly controlled performance. Incidentally, I believe that White composed several settings of this same text but we’re not told which one is performed here.

White composed two sets of Lamentations: one in five parts and another in six. It’s the six-part setting that’s offered here and mightily impressive it is, both as a composition and as a performance. White set six verses – verses 8 to 13 – from the first chapter of the Book of Lamentations. There’s a good deal of variety in the music for each verse and in this performance textural variety is shrewdly used too with solo voices being used for verse four and two solo voices at the start of verse five. This is imposing and eloquent music and Gardiner and his choir perform it marvellously.

At the very start of the programme the music of Peter Philips’ Ecce vicit Leo bursts forth exuberantly, the singing full of vitality. The Monteverdi Choir imparts a terrific spring to the rhythms, especially on the word ‘Alleluia’ which is repeated many times towards the end. There’s similar liveliness in Byrd’s Laudibus in sanctis. Kerry McCarthy describes this as ‘a romp through Psalm 150’ and that’s what it sounds like. Words and notes tumble over one another in this exciting performance yet clarity is never lost. Some may find this style of performance too extrovert for music of this period and I can imagine the way in which words are stressed and accented in the Tallis Suscipe quaeso Domine might cause the same people’s eyebrows to rise. I must admit that I wonder if the words aren’t over-emphasised a little in that Tallis piece but there’s no denying that it’s an arresting performance of this penitential music.

Gardiner leads a beautifully sing account of Byrd’s heartfelt Civitas sancti tui and Turn our captivity, O Lord is equally eloquent until the last line of the text is reached. Here the words ’they shall come with jollity’ are strongly articulated – the rhythms tight and crisp – to emphasise the change of mood. Byrd’s Justorum animae is an exquisite composition and it’s placed near the end of the programme. The performance here is as perfectly calibrated as the music. It falls to Thomas Tomkins to close the programme. Sir John, in a brief note, says of Almighty God, the fountain of all wisdom that it ‘describes the final drawing of the curtains on Elizabethan music.’ Perhaps that’s why he makes Tomkins’ complex music for the concluding ‘Amen’ so intense and expressive.

As I’ve said, this set of performances offers a different perspective on this music compared to what one would experience from hearing a smaller consort sing it. I welcome both approaches and I find Gardiner and his superb choir are very persuasive and stimulating guides to this repertoire. The recordings, engineered by Floating Earth, are excellent, as is the documentation – always a strength of this label. The wonderful cover image of part of the nave roof in Wymondham Abbey, Norfolk, which dates from c 1445, is a further attraction.

From ArkivMuisc.com: Crammed onto one new disc from Cantica Symphonia on Glossa are two of Guillaume Dufay’s most important polyphonic works brought alongside each other for the first time on CD: the Missa Se la face ay pale and the Missa L’Homme armé. The two masses were amongst the first in history to use popular songs for their cantus firmus: Dufay’s own chanson for the first mass and the anonymous popular tune – “The Armed Man” – for the second.

The year 1453 was an extraordinary one in Western Christendom with the Fall of Constantinople following on the acquisition by Louis, Duke of Savoy of what is now known as the Shroud of Turin. As renowned scholar Anne Walters Robertson describes in her incisive scene-setting analysis for the booklet, these two events provided the backdrop for Dufay – newly recalled by the Duke to the Court of Savoy – to compose these remarkable commemorative masses.

As is the case with its general interpretative outlook, Cantica Symphonia opt for performances which embrace the use of instruments such as slide trumpets, sackbuts, fiddles and the organ alongside vocal forces. Director Giuseppe Maletto and organist Guido Magnano discuss their reasons for such instrumental involvement in the CD booklet. This is the fourth recording of music by Guillaume Dufay – to add to two volumes devoted to motets and one to chansons – from Cantica Symphonia on the Glossa label, and it resumes the Italian ensemble’s remarkable coverage of 15th-century treasures.

Christopher Tye was a 16th-century English composer and organist who received the degree of Doctor of Music from both Cambridge and Oxford. He was one of the first composers to write music for viol consort, and one of the most important of his generation. Over 30 instrumental pieces by him survive, including 21 In Nomine settings mostly in 5 parts. After two acclaimed albums dedicated to John Jenkins, the viol consort The Spirit of Gambo presents Tye's daring, uncompromising and strikingly beautiful music.