You are here: Home / Playlists / New Releases and Reissues—Renaissance Polyphony

To view more of our classic shows (from 2000 and earlier), click here.

Preservation of this program is made possible by a generous grant by Wendall Wilson.

I. The Song of Songs (Cambridge Singers/John Rutter). Collegium CD 122 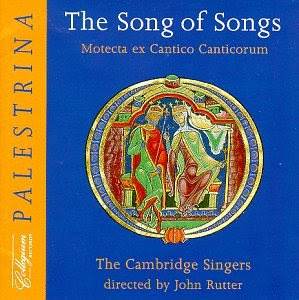 Palestrina's collection of 29 motets with texts from the Biblical Song of Songs, published in 1584, was prefaced by a dedication to Pope Gregory explaining the nature and purpose of the music: to set texts that "express the divine love of Christ for his spiritual bride." He goes on to explain his use of "a livelier style than in my other sacred compositions." In fact, these works are stylistically and thematically closer to madrigals, with their colorful modes, catchy rhythms, and attention to mood- and word-painting. It's fascinating to hear how Palestrina, one of the greatest composers of sacred music, reconciles these outwardly erotic texts with their profoundly spiritual message. John Rutter's Cambridge Singers choose a light, madrigalesque approach that avoids sentimentality, attends to clear articulation, and never forgets the composer's wish to bring pleasure to his listeners. --David Vernier
1. Oculetur me
2. Trahe me
3. Nigra sum and Vineam meam non custodivi
4. Si ignoras, Pulchr sunt gen tuae and Fasciculus myrr
5. Ecce to pulcher es
6. Tota pulchra es and Vulnerasti cor meum
7. Sicut lilium inter spinas and Introduxit me rex
8. Leva ejus
9. Vox dilecti mei, Surge, propera and Surge, amica mea
10. Dilectus meus mihi and Surgam et circuibo civitatem
11. Adjuro vos and Caput ejus
12. Dilectus meus descendit and Pulchra es
13. Quae es ista and Descendi in hortum nucum
14. Quam pulchri sunt
15. Duo ubera tua
16. Quam pulchra es and Guttur tuum
17. Veni, dilecte mi

Although it’s difficult to discern from the outer packaging, this two-disc Palestrina compilation is made from several earlier Tallis Scholars recordings, including the group’s groundbreaking Missa Papae Marcelli from 1980. There’s not much to say here that hasn’t already been said regarding the performances, which are exemplary and remain the standard against which other choirs must be measured in this repertoire. If you have the original Gimell recordings–most of these appear on the four-disc set “The Palestrina 400 Collection” and also are available on several individual discs, then you don’t really need this–unless you want all of these superb works (and performances) under one roof. My only slight caution is that the Missa Papae Marcelli, the earliest-recorded of the selections, is somewhat brassy and harsh in loud passages–otherwise, the sound is excellent. If your collection lacks Palestrina, I can only surmise that the reason is you’ve been waiting for this release. So what are you waiting for? This is it.—David Vernier
- Motets: Assumpta est Maria in caelum; Sicut lilium inter spinas I
Masses: Missa Assumpta est Maria in caelum;
Missa Sicut lilium inter spinas;
Missa Brevis;
Missa Papae Marcelli
Lamentations for Holy Saturday (Lesson 3, 6vv) From Music Web: The choir of Christ Church Cathedral Choir, Oxford, under its director Stephen Darlington is justly famous for its trenchant yet sensitive singing of music from almost all eras. Although they have recorded as much nineteenth and twentieth century music as they have Renaissance polyphony, there seems to be a special affinity between this all-male choir and the music of the period of Palestrina.

The composer's life was lived mostly in Counter-Reformation Rome; he worked for a large variety of religious foundations and lay patrons and was obviously a force to be reckoned with in his dealings on fees, conditions and which 'commissions' he accepted. His output is large, including over one hundred attributable masses, of which O Sacrum Convivium is only otherwise available in an alternative grouping by this same choir and conductor (on a five disc survey, 'European Choral Music 1525-1751' - Nimbus 1758).

It's a beautiful parody mass using the motet, O Sacrum Convivium, by Cristóbal de Morales (c.1500 – 1553) as its 'source'. From the opening of the Kyrie it's evident that the singers are pledged fully to convey the gentle and somewhat understated nature of the motet. Perhaps it's to make that impact all the greater that the usual practice of placing the motet first in the track order has not been followed … it's to be heard at the very end [tr.10]. Even after the delightful and exhilarating Coenantibus illis [tr. 8] (another Corpus Christi motet) and after the splendid Magnificat (Sexti Toni a 6) [tr.9], which is a heady alternation of chant and polyphony.

These themselves follow Palestrina's own setting [tr.7] of the motet O Sacrum Convivium itself; this builds on the plainsong antiphon, not on Morales' work. Tracks can usually be set to play in any order. But with music as ethereal and sublime as this, one scarcely wants to be fiddling with buttons. The producers of the CD may have had a reason for the order they chose. Here let's assume it was aesthetic contrast, and not reference.

The Mass is a reflective work, as befits the occasion which it celebrates - the feast day of Corpus Christi in early summer. Palestrina adheres closely to Morales' work, opening all of the movements except the Et incarnatus and Crucifixus with the earlier composer's motifs. There is - of course - a close match between Palestrina's musical ideas, especially counterpoint, and the text. The articulation and phrasing of the choir respects this well … listen to the changed tempo two or three minutes into the longest movement, the Credo [tr.3], for example. It almost comes to a complete stop as if to invite, not pressure, us into examining the import of the text.

Not that the Choir's style lacks life or forward movement. Later in the movement their pace is full of the joy surrounding faith. But it's a graceful and considered joy, rather than an unbounded one. Their singing is lucid, clean and forward. In the sympathetic acoustic of Dorchester Abbey, Oxford, this is a CD which meets all its expectations. There is a useful introductory essay and full texts in the accompanying booklet. Even were there another recording for comparison, the style and sense of immediacy tempered with elegance in what is an almost relaxed Mass of these performers make the release one to treasure.
Mark Sealey 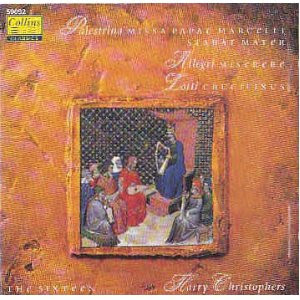 The haunting tones of Allegri's Miserere are unique and instantly recognisable even to those who know little sacred choral music. Palestrina's Missa Papae Marcelli is certainly his best known work. Along with his Stabat Mater it combines exquisite contrapuntal poise with a translucent setting of the words, whereby music and text complement each other to the detriment of neither. The chromaticism and blossoming cadences of Lotti's eight part Crucifixus have made it a work loved by both choirs and listeners. 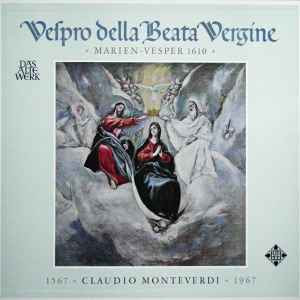 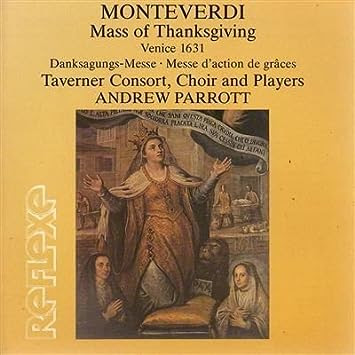 This recording represents perhaps the most convincing reconstruction of the musical aspect of a particular liturgical celebration that I have yet come across. There are various reasons for this, not least the fact that we have more evidence than usual for the occasion in question: the date (November 21st, 1631); place (St Mark's Venice); motive (thanksgiving for the delivery of Venice from the plague); music (some of it, like the magnificent seven-part Gloria, indisputedly, while the rest can be restored with educated guesswork); and, last but not least, documentary evidence in the form of accounts—both financial and eyewitness. Beyond all of this, however, is the quality of the performance itself, complete with appropriate sound effects (such as the gentle clanking of the thurible and the crack of fireworks that brings a distinctly authentic southern European Catholic atmosphere). Tastefully deployed, as here, they bring a sense of ceremony and ritual—which must surely be part of any attempt at reconstructing such a solemn, festive event.

On the recording, the atmosphere is heightened by the use of carefully worked-out spatial effects in an attempt to take into consideration the original positioning and movement in St Mark's. It was actually made in a building about as far removed from the splendours of the great Venetian basilica as possible—Abbey Road Studio No. 1—but the space there was clearly large and flexible enough to recreate the idea of distance in the approaching and receding processions framing the Mass, and (though less noticeably) the relative positions of concertato and plainchant choirs, organs and other instruments. Credit must be given to the technicians not only for achieving this sense of movement without disorientating the listener, but also seeking out a rich, clear sound churchy but not muffled—an improvement, it has to be said, on what you would probably have had as a member of the congregation in St Mark's.

The singers of the Taverner Consort and Choir may not all have the most beautiful of voices, but they bring an intensity to the sound that is laudably consistent throughout—it must, after all, have been an emotional occasion. This goes for the chant as much as for the polyphonic and concerted items. The chanting is refreshingly unfussy, direct and masculine—a point reinforced by Parrott's belief that it should not necessarily be performed with tenors and basses entirely in unison so that where it becomes uncomfortably high for the latter they should quite naturally fall down the octave. This makes for a still relatively strange sound to modern ears, but one that is not—and perhaps not coincidentally—without drama. If you thought all chant consisted of long, hopelessly meandering melodies, try the tone for the Gospel: its minimalism (stemming from the text) is extraordinarily hypnotic in effect. I would strongly endorse Parrott's recommendation to resist any temptation to skip the chant tracks, as he points out, the architecture of the whole provides a perhaps surprisingly satisfying musical experience.

The musical centrepiece of the reconstruction is without doubt the Gloria, resplendent with restored trumpet parts, and Parrott musters his forces well to bring out the drama of the contrasted sections: the soloists agile and expressive by turn, the choir incisive, and the instrumental playing superb, particularly from the violins. Yet there are many more goodies, not least Rovetta's Credo setting with its own internal contrasts and strongly melodic appeal (''Deum de Deo, lumen de lumine'' is a particularly lovely moment) and the virtuoso instrumental items, clearly chosen with care from the output of little-known masters such as Scarani, Usper and Fantini.

By their nature reconstructions do not necessarily conform to CD requirements, but even if one-and-a-half hours of music spread over two discs does not give as good value as some, you can be sure of the quality. All in all, this is a very special and enriching recording. 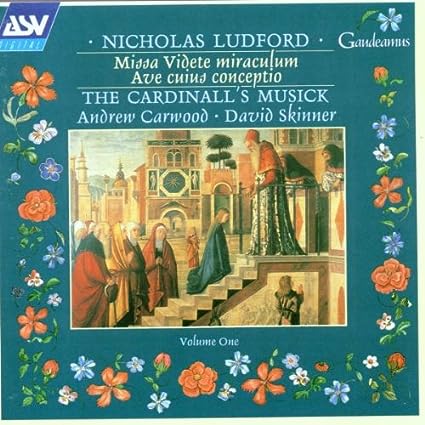 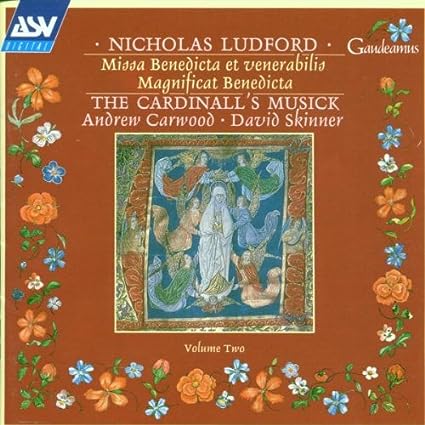 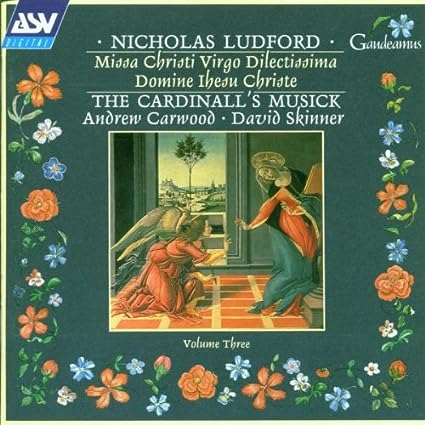 The four discs of music by Nicholas Ludford (c.1485–1557) was the first recording project undertaken by The Cardinall’s Musick and ASV Records. Once thought to have been a shadowy figure about whom we know nothing, thanks to the work of David Skinner, we now can place him as the pre-eminent composer of the last days of pre-Reformation England and inheritor of the mantel of Robert Fayrfax. With his large number of festal masses, his cycle of Lady Masses, two Magnificats and many antiphons he was one of the most prolific writers of his age. His music, which is of the highest quality, is brought to life for the first time in these recordings.