You are here: Home / Playlists / New Views of Josquin

Views of the L’homme armé, rarely-recorded sacred works, and arrangements of Marian motets for lute. 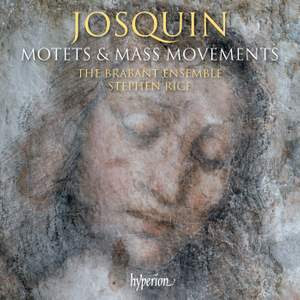 From Early Music Review:  The Brabant Ensemble specialises in bringing us music by neglected composers from the incredibly talented Franco-Flemish school which flourished between Josquin and Palestrina. We have it to thank for discs of revelatory music by the likes of Dominique Phinot, Thomas Crecquillon, Pierre de Manchicourt, Jean Maillard, Jacquet of Mantua and Jacob Clement. Its version of the latter’s sublime setting of Tristitia et anxietas alone justifies the choir’s existence, besides the numerous treasures on every other disc. They have also released a CD of neglected music by Palestrina, yet I found this strangely underwhelming, both as music and performance. Here they offer us music by the earlier bookend of this vibrant phenomenon.

The music on offer here consists of eight motets and two free-standing “mass movements”. The latter are easier to discuss and can be mentioned first: the Gloria de beata virgine and Sanctus de Passione. The Gloria is the more substantial of the two, a seemingly early, mediaeval-sounding work. The Sanctus is almost disconcertingly brief: even including an Elevation motet “Honor et benedictus” between the Sanctus itself and the Benedictus (scholarly opinion is that either the Elevation motet or the Benedictus would have been performed liturgically but not both, but the Ensemble rightly includes both for completeness and for the edification of listeners) the entire movement takes only 3’46. One can only agree with the eminent musicologist who described it as “unpretentious”.

The reasons behind the selection of material for this disc are not clear. Presumably, the record is released to celebrate Josquin’s quincentenary, though this is only stated explicitly in some of the advertising material. While all the items have the imprimatur of inclusion in the New Josquin Edition, Stephen Rice’s enthralling notes observe that doubts linger over the authenticity of most of them. Also, three of the items – Huc me sydereo, Stabat mater and O bone et dulcissime Jesu – possess or are suspected of possessing one or two extra parts which may or may not originally have been composed by Josquin. There are certainly other mass sections securely attributed to Josquin, and even I know of one other motet which has an extra voice supplied by another composer, so I wonder whether there exists a substantial repertory of Josquin’s sacred pieces which have subsequently had one or two extra parts added by other hands. My concern is that the selection here seems to lack some focus. Perhaps that focus is the function of these three sumptuous works for six voices, but if so, what is the rationale behind partnering them with these other more spartan works? There is certainly no individual number – like for instance Media vita in a programme of motets by Sheppard – which functions as that focus or that is simply a showstopper. For all their inclusion in NJE it appears that the three motets that follow – Domine ne in furore, Usquequo Domine and Homo quidam fecit – have all had doubts expressed about their authenticity. This leaves the two remaining motets which start the disc – Mittit ad virginem and Alma redemptoris/Ave regina – and even the former, the very first in the programme, survives with a plausible alternative attribution, leaving only the latter with a clean bill of musicological health. Although individual items have many features to relish – dissonances in Stabat mater, gorgeous textures in Huc me sydereo plus rich harmonies, sensuous sequences and more dissonances to relish in O bone et dulcissime Jesu to pick a few at random – there remains the fact that, to the layman at least, some of these effects might have been generated by the inclusion of notes not originally put in place by Josquin himself. These works rub shoulders with the three works for smaller vocal resources, mentioned above, about which doubts have been cast against Josquin’s authorship. The programme is topped by the two works, only one of which is incontrovertibly authentic, in his favoured four parts and tailed by two undistinguished but authentic mass sections, also in four. Perhaps this is the point: to provide successive contrasting tasters of the basic Josquin, the luxuriously expanded but only partly authentic Josquin, the questionable Josquin, and back to the authentic basic Josquin. These stops along the line are individually rewarding but the journey itself lacks coherence – all a bit halting, or, if one is shuffling the sequence, a bit arbitrary.

Performances that seemed meandering and undifferentiated at a first hearing blossomed in most (not entirely all) cases during subsequent hearings to come over as sensitive to individual texts and sonorities, though passages in the works of four parts sound almost exaggeratedly sparse beside those in six – reflecting Josquin’s technique in composing for the smaller number of voices – and I defy any choir to make the Sanctus sound more than “unpretentious”. Meanwhile, there is uncertainty as to how much real Josquin we are hearing. Does it matter? This disc does not provide an answer, but it does provide much pleasure.

Two decades following his first album of lute intabulations by the renaissance composer Josquin des Prez (the first album of its kind), celebrated lutenist Jacob Heringman returns to this rich but largely neglected part of the repertoire to present a new recording of intabulations for lute and vihuela.

In celebration of his 500th anniversary, Josquin is once more the composer behind these fascinating and compelling arrangements, and this programme explores further vocal music by this most revered of early music names, including Marian motets and realisations from his Missa de Beata Virgine. As well as employing sources of various sixteenth-century lutenist-composers, Jacob has included several of his own intabulations in this captivating programme.

From Gramophone: Jacob Heringman issued his first disc of Josquin intabulations back in 2003 and he has since included Josquin intabulations on at least two other albums. So you could say that he comes to his new project with a fair experience of Josquin as arranged for lute and vihuela. And it is good that he comes with that background, because over half of the album is intabulations of his own. In general I am always nervous when musicians – particularly early music specialists – reach a certain age and start composing their own early music; moreover, it is beginning to be a bad influence on younger musicians too. As Heringman says in his notes here, there is quite enough existing music to keep us all happy for many generations. But it is easy to see and hear that he has really absorbed the styles of the 16th century; his own compositions are thoroughly idiomatic.

All the same, it is tempting to feel that the greatest achievements here are the motet Inviolata, integra et casta es as arranged by Hans Gerle (printed in 1532) and Stabat mater as arranged by Simon Gintzler (printed in 1547). Here and throughout there is a marvellous quietness and spiritual depth alongside flawless technical control. The disc comes with charmingly personal notes from Heringman himself, the recording engineer (Anthony Robb, who has done a marvellous job here) and his friend the singer John Potter. In all it is a beautifully atmospheric and seriously welcome addition to the catalogue. 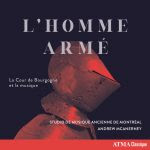 The powerful Duchy of Burgundy is home to the XV th century the most brilliant court at the time. The first of the Renaissance, it established the uses of curial life for centuries to come. Open to influences, this high center of civilization was able, according to Michelet, "to reconcile the North and the South". Passionate music lovers, the Dukes Philip the Good and Charles the Bold had hired composers to their service who, like Guillaume Dufay, Gilles Binchois and Antoine Busnois, will lay the foundations of counterpoint, which the West until Bach will consider as the unsurpassable process of musical composition.

From Renaud-Bay: The Armed Man reveals a musical journey at the Court of Burgundy in the 15th century. Under the direction of Andrew McAnerney, the Montreal Early Music Studio offers a program of motets by the first Franco-Flemish polyphonists - Guillaume Dufay, Antoine Busnois, Josquin des Prés and Gilles Binchois (whose motet A solis ortus cardine is recorded for the first time). Sung a cappella or accompanied by sacqueboutes, this music reflects the subtle art of vocal counterpoint.

Acclaimed for "its rich texture and its radiant sounds of bewitching beauty", the Studio de musique ancien de Montréal (SMAM) has carved out a place of choice for itself in the musical world of Quebec and Canada. Founded in 1974 by Christopher Jackson, Réjean Poirier and Hélène Dugal, the Studio's mission is to interpret sacred and secular vocal music composed in the West before 1750.

Applauded for his interpretations of early music, Andrew McAnerney has been running the Montreal Early Music Studio since 2015. A former member of the Tallis Scholars, he has performed in twenty countries with world-renowned ensembles. Mr. McAnerney cultivates his passion for musical excellence and accessibility. He regularly prepares his own scores from their original sources and is particularly interested in bringing forgotten masterpieces to life.