St. Nicholas, Christmas music from the last of the Minnesingers, and a beautiful Noel from Renaissance France.

I. Hör Kristenhait! Sacred Songs by the Last of the Minnesingers (Ensemble Leones/MarcLewon). Christophorus CD CHR 77395. 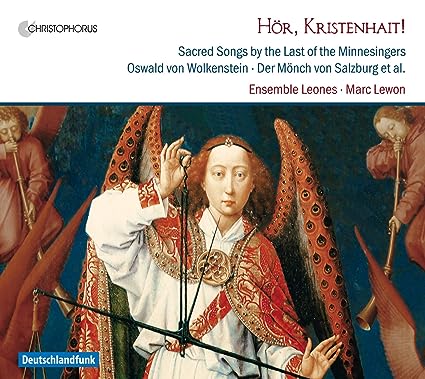 The greatest German poets of song lyrics during the late Middle Ages, the Monk of Salzburg and Oswald von Wolkenstein, as the 'last of the Minnesingers', are not only representatives of the flowering of the secular poetry and music of their time. They were also important composers of sacred music in the German language, an aspect that has hardly received attention so far.
This recording, 'Hör, kristenhait!', by the Ensemble Leones, presents this profoundly devout side of both musicians in which they employ their entire poetic and compositional energy: the Monk of Salzburg, with his own German texts sung to Gregorian melodies, and Oswald von Wolkenstein with his new and splendid tunes. The song-speech poet Michel Beheim also makes his voice heard with the invocation to the Holy Spirit that opens the programme. The CD is completed by instrumental adaptations of sacred works by composers of this epoch.
The highly experienced singers Sabine Lutzenberger and Raitis Grigalis stand by the side of the ensemble director Marc Lewon, who accompanies them with Baptiste Romain on various instruments of the period. From High Fidelity: In the Middle Ages the reverence of Saint Nicholas wasn't only limited to Christmas season, as it is today. Tacet, using this forgotten tradition, decided to release this album before December the 6th (2014).

Santa we know today was based on Saint Nicholas, also called Nikolaos of Myra a historic 4th-century Christian saint and Greek Bishop of Myra. The oldest historical records of him come from the 6th century. His name was removed from the official list of Catholic Church saints only by Vatican Council II.

Many musical pieces coming from England, France and Switzerland refer to this saint. Ensemble Peregrina chose almost 30 most interesting ones that were created between 11th and 15th century, and Andreas Spreer recorded them during a puristic session in Basel in November 2013. The ensemble was lead by Ms Agnieszka Budzi?ska-Bennett, ist founder – a Pole currently living in Switzerland. Ms Agnieszka graduated in Basel from Schola Cantorum Basiliensis and decided to stay in the city for good.

We know the ensemble and ist leader from their performances, for example during Misteria Paschalia festival in Cracow. We know that they specialize in recording music that is rarely performed – one of the recordings I remember really well is Filia Praeclara, recorded for Divox Antiqua with music from 13th and 14th century Polish Clarisse Convents (2008). It served as a reference point for me. For the other one I chose Legends of St Nicholas (1999) by Anonymous 4 with similar music, recorded for Harmonia Mundi France.

The music on the latest Ensemble recording delights with wonderful ease of flow, and with ist coherence. Although music

Also sound-wise this is a very interesting recording. Voices takes from the same perspective as on Harmonia Mundi recording, seem more resolving, and the acoustics of the recording is presented in a better, more precise way. Sound definition is also definitely better. Sound of Anonymous 4 seems more focused on the midrange and thus it sound is warmer. It lacks openness of Mr Spreer's recording though. In comparison, Divox recording shows that microphones were placed very close to the ensemble during recording. It creates an impression of a very close, direct contact between performers and listener, but it also changes tonality of the recording making it bit too bright. Miracula… is a wonderful recording nicely “sustaining” Tacet's deserved reputation.

From Gramophone: It feels like a long time since the last release from Ensemble Clément Janequin. They’ve been going for about 35 years, and new recordings have been rarer in recent years, but this one – issued just in time to brighten my Christmas – is as impressive in its way as anything I’ve heard from them, and that’s saying something.
This musical tableau dramatises the different attitudes to Christmas at the mid point of the 16th century. It opens with a seasonal plainsong hymn, solemnly intoned, albeit to a ternary lilt. Immediately there follows a parody set to the same tune, and initially sung in the same way, but before the verse is out the tone has begun to change as the text enumerates the victuals gathered at the festive table and describes their increasingly marked effects on the assembled company, the words slurred, the pitching and rhythm listing more and more. It’s classic Dominique Visse, and it had me laughing aloud. Thereafter, the disc alternates sacred and secular with immaculate poise. The former is beautifully done – the accompaniment on chamber organ is reminiscent of their past work in this register – and the latter delivered as lustily as ever. Harking back to the ensemble’s Protestant psalm project, French chansons have their frankly smutty texts replaced by touching depictions of the Nativity. Towards the conclusion, the tension between Protestants and Catholics bursts out into open hostility in a series of musical pamphlets, in which the two faiths consign each other to the devil with equal venom (and, it must be said, relish).

The ensemble continues to do what it does best but retains a freshness and questing spirit that sometimes eludes groups of comparable vintage, a sense of joyous music-making that marked them out from the start and which they’ve never lost. It was utterly infectious then, and it still is.