Seraphic Fire has made a new recording of the extraordinary Hildegard von Bingen’s mystery Play of Virtues; we are joined by the ensemble’s director, Patrick Dupre Quigley, to share it with us.

NOTE: All of the music on this program features the Ensemble Seraphic Fire conducted by our guest, Patrick Dupre Quigley. 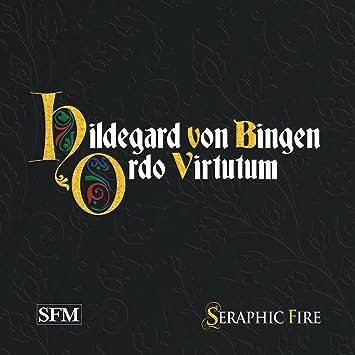 Composed by 1151 CE, Ordo virtutum tells the story of a wandering soul, Anima, and her struggles between the forces of good and evil. The album will be the first complete, historically accurate recording of Ordo virtutum to include the gradual “Qui sunt hi” in its entirety.

“St. Hildegard of Bingen’s Ordo virtutum (variously translated as ‘The Play of the Virtues,’ ‘The Rite of the Virtues,’ and so on) is the only music drama from the Middle Ages for which we have a named composer,” writes Dr. Honey Meconi, author of the 2018 biography Hildegard of Bingen, professor of musicology at the Eastman School of Music and the University of Rochester, and artistic advisor to Seraphic Fire for this project. “With this recording, Seraphic Fire presents the world premiere of the complete version of Ordo virtutum on disc.”

Hildegard of Bingen, born to a noble family in 1098, began to experience religious visions as a young child. At the age of 14 she was enclosed (literally bricked into a cell) with the anchorite nun Jutta. On Jutta’s death in 1136, when Hildegard was 38, she was made magistra (leader) of her monastic community; eventually she left confinement and founded a new abbey. In the 43 years of her monastic leadership, Hildegard would emerge as one of the leading thinkers of her age. She made significant contributions to philosophy, music, theology, and the natural sciences, and corresponded with kings and popes. Remarkable for a woman at the time, Hildegard preached in public from the pulpit, and was widely recognized as an intellectual and spiritual force. Hildegard was canonized (declared a Saint) by the Catholic Church in 2012.Stabat Mater.

The musical roles of Ordo virtutum are exclusively female. The Devil, who faces off against the heavenly Virtues in a battle for Anima’s soul, is the only male character in the play, and is unable to sing; he can only shout. Luthien Brackett sings the role of Anima; Clara Osowski portrays Humility, Queen of the Virtues; and James K. Bass gives voice to the song-less Devil. Virtues, Embodied Souls, and Patriarchs and Prophets are sung by the women of Seraphic Fire, and artistic director Patrick Dupre Quigley conducts.

“The music of Hildegard of Bingen’s Ordo virtutum is, at its musical core, a celebration of women and their voices,” says Seraphic Fire artistic director Patrick Dupre Quigley. “Written for her own community of nuns, Hildegard created the music of the Ordo and its characters for women she knew, led, and sang with daily. It is a great joy for every member of Seraphic Fire to have the opportunity to perform and record this bedrock piece of music history, and we hope that it will encourage more performances of the Ordo in the United States.”

1 Introit for the Dedication of a Church: Terribilis est locus iste

When von Bingen created this 12th century music drama, she could never have imagined any performance beyond ceremonial ones within her monastic community of nuns. Chapels and halls were their gathering spaces, the passage of time was marked by prayers, singing resonated inside a larger stillness. And that sensation of intimate distance—depth and breadth—is captured here in the pure-toned chorus of “Introit for the Dedication of a Church.”

That space, the Sauder Concert Hall at Goshen College, Indiana, is part of the drama in this CD, which offers the world premiere of Ordo Virtutum in a “complete” version that includes Medieval liturgical text.

Patrick Dupre Quigley is the conductor, and musicologist Honey Meconi, a von Bingen expert, is credited as artistic advisor (she also wrote the informative booklet notes). Their conception has the voices moving from the back to the front of the sound field, a simple idea that replaces the sight of a ceremony with the sound of one. The transition from the “Introit” to the “Prologue” (and beyond), is marked by ringing crotales and the clear shifting in the presence of the sound. Before one’s ears, the performers enter the stage and then come toward the listener. The ear moves with greater attention to the speakers.

This is a drama of virtues—one translation of the title is “The Rite of the Virtues”—in which those virtues, like Faith, Chastity, Heavenly Love, and Mercy, led by Anima (mezzo-soprano Luthien Brackett) and Humility (mezzo-soprano Clara Osowski) are beset by the Devil (bass James K. Bass). While the chorus of assembled virtues sings without vibrato, the solo voices add touches here and there at the end of phrases, an emphasis that, even through the Latin, turns musical phrases into meaningful statements. There is a strong dramatic contrast, serious but with a playful sense of excitement, to the mellifluous lines from Brackett and Osowski, rising and falling with the pleasing naturalness of breathing, and Bass’s dastardly articulations. The Devil is charismatic as always, the Virtues commanding and unperturbable.

The Devil’s appearance is heralded by clicking stones, one of the expressive liberties that Seraphic Fire has taken with the original material. This is ancient music, and a huge part of performing von Bingen’s work is pulling together fragments and determining how to understand and translate her notation, which comes from an era that recorded the order of pitches but left rhythms and timings up to an interpretation that conformed to a general consensus long since lost. As Quigley explains in the booklet, the group gave most of the notes equal timing, but followed what seems to be an intuitive approach to adjusting rhythms for passages where the melodic and textual drama of the music called for that. This is monophonic music, but in key sections the singers divide into an octave, or sing a line against a drone. Quigley writes that these “were creative choices for this particular performance and are not indicated in the manuscript.”

As, this CD shows they were wise choices. The musical performances are skillful and polished—the nature of using a modern, professional ensemble for a piece that was made specifically for von Bingen’s peers and colleagues, no matter their musicality—and in interpretations of works like this, there’s always the danger of being too smooth, too glossy, turned into a sonic object without any of the force of meaning with which the work was first created.

But the interpretive touches add surprises and mysteries—even knowing they are coming, the clicking stones remain odd and intriguing—and the rhythmic and harmonic variations drive the work through tension to a palpable feeling of finality. And as for the sound of the recording, the rich, clear resonance has every note of melody hanging in the air, a built-in backdrop of harmonic tension and releases that adds to the beauty of this CD, and the feeling of a clock pausing so one can hear and witness something important