You are here: Home / Playlists / Oxford vs. Cambridge

Delphian gives us the latest from Merton College, while the Choir of Gonville & Caius recreates music from the lost Palace of Westminster.

NOTE: All of the music on this program is from the Delphian label. For more information: 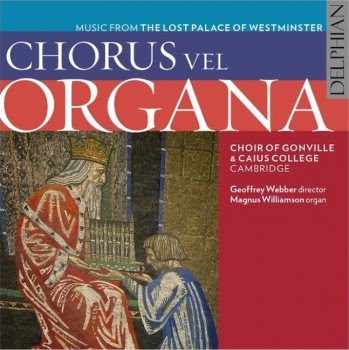 Great Britain’s modern Houses of Parliament conceal a lost royal foundation: the chapel of St Stephen, begun by Edward I and raised into a college by his grandson Edward III. The foundation maintained an outstanding musical tradition for almost exactly two hundred years before the college was dissolved in 1548, when the building became the first permanent meeting-place of the House of Commons. This recording reflects the musical life of the college in its final years under Henry VIII, and reconstructs both the wide range of singing practices in the great chapels and cathedrals and the hitherto largely unexplored place of organ music in the pre-Reformation period.

The repertoire of music chosen reflects the chapel’s dedication to St Stephen, and the disc also features three items from the Caius Choirbook – a handsomely illuminated manuscript, once owned by a canon at St Stephen’s, which now resides in Gonville & Caius College.

'Geoffrey Webber and the Choir of Gonville & Caius College, Cambridge with Magnus Williamson remind us of the riches of the Lost Palace of Westminster. The sound of that reconstructed 16th-century chamber organ adds a highly distinctive character to the sound. And the speculative interweaving of voices and organ feels perfectly plausible. The recording is impeccable. And Webber's notes are really helpful in understanding the sources of the music and the decisions they've taken in bringing it back to life.' BBC Radio 3 Record Review

'The performances consistently breathe an air of gracefulness and musical conviction to which the listener cannot fail to respond with warmth and enthusiasm, and like everything else on this CD, the beauty of tone and musicality are indeed treasured elements; the fruits of true sensitivity from a group of exceptional artists. A riveting historical document, excitingly annotated and wonderfully recorded.' Music & Vision 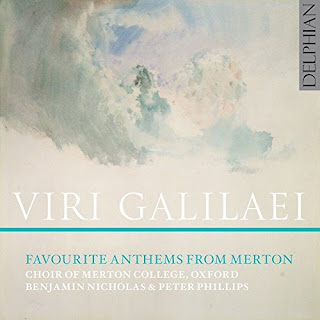 From PlanetHugill.com--Themed collection of motets and anthems seem all the rage at the moment for CDs from choirs such as those of the Oxbridge Colleges. For the latest disc from the choir of Merton College, Oxford, entitled Viri Galilaei, we get a collection of what are described as Favourite Anthems and indeed the collection does include some of the most beloved anthems along with a couple of more unusual contemporary pieces. Conducting honours are shared between Benjamin Nicholas and Peter Phillips with a selection of pieces by Jonathan Dove, Thomas Tallis, Edward Elgar, Thomas Morley, John Rutter, Hubert Parry, William Byrd, Roger Quilter, Gerald Finzi, William Harris and Patrick Gowers. Organ duties are shared between Charles Warren and Peter Shepherd.

Jonathan Dove's Te Deum is relatively new, it was commissioned for the new Merton Choirbook, but it seems set to become a modern classic. Starting from a virile choral unison, Dove uses the combination of a choir building from unison with rich organ accompaniment which is beloved of composers for the Anglican liturgy. Here Dove's lyrical music over the pulsating organ gives some lovely textures full of a clear sense of Dove's musical personality, and the texture magically thins towards the end.

With one except, Peter Phillips conducts all the 16th century items. He and the choir give a simple but effective account of Tallis's If ye love me with a great sense of flowing line.

Merton College Choir
Merton College Choir
Elgar's Give unto the Lord was written in 1914 and sets words from Psalm 29. A lot of Elgar's sacred music derives from the earlier part of his career, but this is big bold mature Elgar with a great sense of nobilmente, yet subtle and flexible too. Whilst we get a full bodied performance from Benjamin Nicholas and the choir with Charles Warren on organ, there are some lovely intimate moments too.

Peter Phillips and the choir give a very elegant account of Thomas Morley's Nolo mortem peccatoris, not a Latin anthem but a setting of a macaronic text by John Redford. The choir brings out the expressive melancholy of the piece, singing with great purity of timbre.

John Rutter's The Lord bless you and keep you, setting a text from Numbers used at Evensong, is small but perfectly formed; a lovely tune perfectly evoking a sense of the evening coming. Hubert Parry's Milton setting Blest Pair of Sirens is on a far bigger scale, with Charles Warren accompanying on the organ and impressing with the lovely prelude. Given the size of the choir (28 young voices) this is quite an intimate performance, often chamber-like but there is innate strength in the singing too and a really rousing conclusion. It is Benjamin Nicholas who conducts Byrd's Diliges Dominum in a performance notable for the smoothness and transparency of the texture, though I would have liked more words.

Roger Quilter's Lead us heavenly Father has rather a hymn-like quality to it in the first verse, but the second is for just tenor solo (Oliver Kelham) and organ (Peter Shepherd) whilst the final verse gets more complex mixing all these ingredients together. Then Peter Phillips conducts a poised and beautifully elegant account of Thomas Tallis's O nata lux.

Gerald Finzi's Lo, the full, final sacrifice is the largest piece on the disc. A setting of Thomas Traherne, at over 15 minutes long this is far more than just an anthem. Charles Warren provides the complex organ accompaniment whilst Francis Shepherd and Thomas Herring provide the fine tenor and bass solos. There is a rich complexity to the work with a lovely fluid performance from the choir. They give a shapely sense phrase, but clarity of the words is sometimes compromised in favour of a fine line.

William Harris's Faire is the heaven, a favourite with many choristers, is sung with great beauty of tone and a lovely transparency of texture in a very refined performance. The last work on the disc is Patrick Gowers Viri Galilaei, setting words for the Feast of Ascension it uses choir and two organs though here we have both Charles Warren and Peter Shepherd playing the Merton Chapel organ. It moves from a richly mystical opening, through to a virile climax and a concluding hymn decorated with a propulsive organ part but ending on a highly mystical note. A brilliant musical evocation of the Ascension.

This is an attractive collection, well sung. Admirers of the choir and those looking for an interesting selection of choral music need look no further. 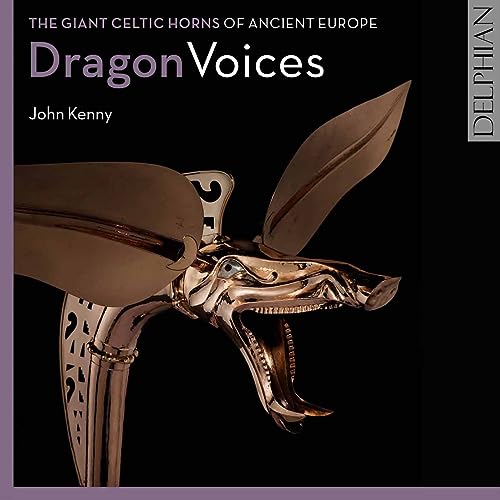 People of Celtic culture all over ancient Europe were fascinated by lip reed instruments, and made great horns and trumpets in many forms – including the carnyx, a two-metre-long bronze
trumpet surmounted by a stylised animal head. One of these was found at Deskford, Scotland, in 1816 and reconstructed in the early 1990s; it is joined here by the magnificent Tintignac carnyx, discovered in southern France in 2004 and reconstructed specially for the current project. A new reconstruction has also been made of the Loughnashade horn from Ireland, with its exquisite decorated bell disc.

Recent developments in music archaeology have vastly increased our knowledge and understanding of both the physical construction of these instruments and their likely playing techniques. John Kenny has specialised in their performance for a quarter of a century, and his newly created music explores the voices of these instruments in solo, duo and ensemble textures, drawing upon Celtic mythical characters, echoes of ancient ritual in modern society, and impressions of real places in Ireland, Scotland and France.

From the Historical Brass Society: Those attending the Historic Brass Society Session of the EMAP (European Music Archaeology Project) in Viterbo, Italy in 2015 had the rare experience of viewing, listening to, and playing a number of reproductions of ancient brass instruments. This was the result of a five-year project undertaken by EMAP to reproduce and explore the sound world of ancient Roman, Greek, Egyptian, and Celtic cultures. John Kenny was part of that conference and this recording is an offshoot of his long experience playing and composing music for those instruments. In this CD he primarily plays three instruments; the Tintignac carnyx after a first-century BC original found in Tintignac, France (made by Jean Boisserie), the Deskford carnyx after a first-century BC original found in 1816 at Leitchestown, Scotland (made by John Creed), and the Loughnashade horn after a first-century BC original found in 1794 in Co-Armagh, Ireland (made by John Creed).
The recording includes 21 compositions by John Kenny for solo, duo or trio settings. The two and three part works are the result of studio multitracking. These works are improvisational in nature and comprise multiphonics and many other twentieth and twenty-first century techniques. To this listener’s ear, the pieces explore sound effects and tonal manipulation rather than a more conventional compositional devise of development of themes. Playing and writing contemporary music on and for old instruments, in this case, very old instruments is, to me at least, a perfectly acceptable undertaking. Composers and performers are always on the lookout for different tonal textures and at this stage in the early music movement there is a solid tradition of new works on old instruments. The carnyx and Loughnashade horn are lip-vibrated brass instruments but have their own unique sounds. Certainly similar to modern horns, trombones or even trumpets at times, but not quite. They have their own sound.

The liner notes by Kenny in this CD are wonderful, offering a concise history of these ancient instruments as well as a detailed examination of the important work of EMAP. In those notes he makes the case to explore those sound capabilities through the use of contemporary composition. Another argument could also be made that hearing reproductions of these two thousand plus year old instruments in this context prejudices our ears and imaginations as to what those instruments may have sounded like. Kenny makes the point that physiologically we are no different from people who lived two thousand years ago. True enough. He also goes on to point out that cultural context is the only difference as ancient man was not short of imagination. However, it is the cultural context that is the main point. No doubt, John Kenny’s mind is full of a vast array of sounds (Boulez, Cage, John Coltrane and Cecil Taylor etc.). Ancient man, as Kenny points out, was not in short supply of imagination but was completely without the experience of our sound-world. Hence, the ancients would likely not have attempted to make the sounds created here. Perhaps some additional tracks of the performer playing much simpler “excerpts” on the individual instruments would allow us to formulate a less “prejudiced” understanding of the historical use of these wonderful instruments. That philosophical debate aside, we owe both John Kenny and the others in EMAP a debt of gratitude for bringing these ancient beasts (as the dragon-head bells would indicate) back to life.