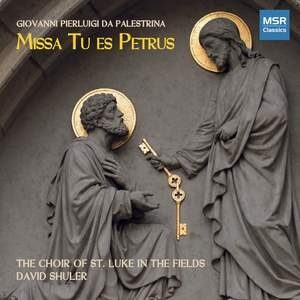 The great 16th century master performed by The Choir of St. Luke in the Fields, Beauty Farm, and the St. Vincent Camerata Scholars. 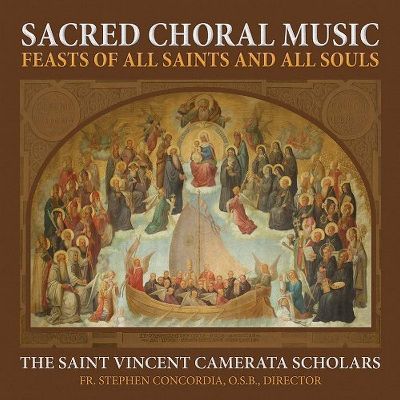 The musical program on this album explores themes associated with the Feasts of All Saints and All Souls (November 1 and 2). Several of the pieces were certainly composed either for the liturgy of All Saints Day, or for another liturgical celebration of a particular saint. Two of the works are laments, and though not explicitly intended for a specific liturgy, are famous examples of Renaissance musical works that sing of the souls of the faithful departed. The pieces come from the middle and late Renaissance and include works by Franco-Flemish composers, by composers of England, and from the Roman School.

The Camerata Scholars, directed by Father Stephen Concordia, O.S.B., formed in the Summer of 2011, includes both veteran members of the Camerata, some of whom have been singing together for over 20 years, as well as newer members, particularly students of Saint Vincent College. They are dedicated to the study and performance of a cappella sacred music in liturgies and in concerts, especially the works of the Renaissance and contemporary periods. Through their performances, educational outreach, and the sponsoring of Choral Scholarships at Saint Vincent College, the Camerata Scholars aim to be a catalyst for a broader and more profound appreciation of the inheritance of Catholic sacred music.

Following the January 2018 performance of Palestrina's Missa Tu es Petrus and other works by the same composer, the Choir of St. Luke in the Fields recorded the music from the concert. In addition to the mass and the motet on which it is based, the recording includes Sicut cervus/Sitivit anima mea and other motets. The radiant Tu es Petrus mass and motet are late works of Palestrina demonstrating his consummate mastery of counterpoint. We present this recording in memory of Susie Gale.

From Early Music Review: After their recent successful recording of music by Pierre de Manchicourt, this New York group has turned its attention to more familiar fare by Palestrina; this also means entering a much more competitive field. These are solid performances with some undoubted highlights, though the quality of the vocal sound is not always consistent. There are fourteen singers in the group, roughly two per part in the six-voice music which dominates this disc. I particularly like the strong sense of the tactus (pulse) which goes through everything they sing. Praiseworthy, too, is the good blend and a resonant recording environment which still allows voice-leading and contrapuntal writing to come through clearly. As well as the motet Tu es Petrus and the Mass based on it, they perform five other pieces. I particularly enjoyed two five-voice motets, Caro mea and the Offertory Improperium expectavit: both achieve a rounded balance sometimes lacking in the other pieces. In other cases openings are a bit tentative or rough, vowels are not always well blended, and tuning and support is not consistently maintained. That said, this recording presents a good cross-section of Palestrina’s more forward-looking music, much of it relying on antiphonal exchange between two voice groupings, and culminates in the double-choir Surrexit pastor bonus. This piece represents late Palestrina and shows us where the Roman polychoral idiom would head in the next generation. Sleeve notes are informative and contain all texts and translations. A stimulating disc with some gems. 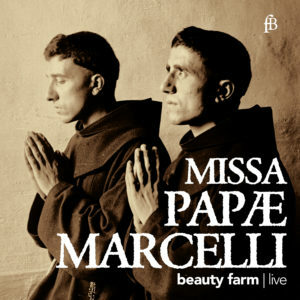 Palestrina «Missa Papae Marcelli»—the crown of church music Mid-16th century: Catholic church music is threatened by a «pandemic». All too worldly, artificial things had crept into sacred chanting to such an extent that the famous Council of Trent even wanted to reduce singing in the mass to the monophonic Gregorian chant again. As the Fama tells us, Palestrina saved polyphonic church music from this crisis with his «Missa Papae Marcelli». In a live recording, beauty farm sings this legendary work, which raises complex questions of interpretation and juxtaposes the mass with wellknown hymns in the chorale. frabernardo dedicates the album to Bruno Turner, who once set standards in early music with the ensemble Pro Cantione Antiqua, for his 90th birthday on 7th February 2021.

From Amazon: This live recording of a concert from Brunnenthal, Austria, brings us Palestrina’s famous and oft-recorded Mass setting - but on this occasion performed in the uniquely vivid manner of the Beauty Farm ensemble. The result is a familiar masterpiece with its centuries-old varnish stripped away in a rendition of striking colour and clarity. The group’s seven voices, consisting of two countertenors, two tenors, baritone, and two basses, create their usual beautifully balanced textures. The resulting rich blend of voices, together with the communicative power and spirited delivery which have served them so well in their recordings of Franco-Flemish music, are a revelation in the music of Palestrina.

In this fresh and vivid manner, the Mass movements are given with interspersed passages of plainchant. No other polyphonic works are included, resulting in rather short measure at 48 minutes of which around half is plainsong. The latter is very well sung, but whether these passages will attract repeated listening is a matter of taste. This being a live concert, there is a little extraneous noise; also the recording level is rather high, so listeners will need to adjust their volume controls. The recording is close but not without ambience. Booklet notes are very good, although no texts are included. The recording has been issued as a tribute to the early-music pioneer Bruno Turner on his 90th birthday, and a very worthy tribute it is.

Made in October 2020 and evidently a product of coronavirus times, this recording is a stunning success. Even making allowances for the above reservations, it’s a superb and revealing performance of Palestrina’s famous Mass – the best I’ve ever heard, in fact. Renaissance enthusiasts are almost bound to be transfixed.