25 Years ago, Paul McCreesh gave us a spectacular recording of a Christmas mass as it would have been heard in 1620; last year, he created a new version for a performance at Versailles, which we will experience this week.

This Chateau de Versailles DVD its in collaboration with the Royal Opera and Center for Baroque Music. For complete information: https://cmbv.fr/ 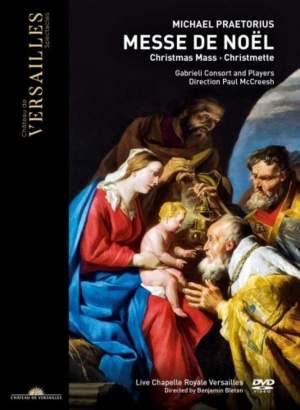 Michael Praetorius was the most prolific German composer of his generation, making use of a beauty of sound and an abundance of instruments worthy of his contemporary Monteverdi. Here we have a festive Christmas Mass as might have been heard in a great Lutheran church in the North of Germany in around 1620.The congregation sang Lutheran Chorals which were part of the other music and which required the presence of the best performers in the city as a support to the children’s and adult’s choir creating an extraordinary musical communion. Spatialising this Christmas Morning Mass in the exceptional architecture of the Royal Chapel of Versailles, Paul McCreesh alternates these monumental pieces and the soloist’s airs in a rich instrumental decoration, giving the work the popular and festive dimension of a brilliant fresco.

From the Centre de Musique Baroque at Versailles: To the delight of the faithful, here is a festive Christmas Mass as we have heard in a large Lutheran church in North Germany around 1620.
Michael Praetorius was the most prolific German composer of his generation, practicing from 1590 to 1621. At the start of the 17th century, he produced exceptional music which became essential throughout North Germany, thanks to a style of 'a great modernity, and melodies very inspired by Italian models. His music, for this Christmas morning Mass, is based on the Lutheran tradition which sees the faithful actively participating in the musical ceremony, in particular by the great choirs coming directly from Luther's corpus. The music is therefore skilfully designed to allow children's choirs, but also amateur choirs, to integrate into the score in an extraordinary musical communion.

Alternating monumental and spectacular pieces, with Italian arias reserved for soloists, Praetorius embeds the texts - Latin or German according to their destination - with a very rich instrumental finery. He also recommends distributing the performers in the space as well as possible, so that the faithful (and listeners) feel at the heart of this very brilliant liturgy, and often carried away by dance rhythms like Praetorius had compiled dozens!

Responding to an order intended for Versailles, Paul McCreesh puts back on the trade this “Chrismette" which he had reconstituted in 1994 with his valiant Gabrieli Consort and Players (a legendary recording!) And joins the Pages and the Songs of the CMBV to give to the popular and festive scale that make it a resplendent fresco. 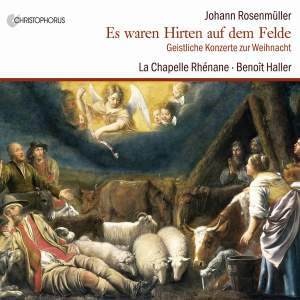 The ‘Christmas History’ was written by Johann Rosenmüller in Leipzig in the middle of the 17th Century.

Rosenmüller brought the musical avant-garde of his time from an extensive trip to Italy in the winter of 1645/46 to Central Germany, which was also culturally bled out by the Thirty Years War.

Under his direction, music was heard from the galleries of the Leipzig churches which could not be heard anywhere else in Germany: vocal concerts with a large ensemble made the nave vibrate, colourfully composed instrumental ensembles structured the works with interludes and ritornelles.

The programme is rounded off by the ‘Christmas History’ by Heinrich Schütz.