Two great French early music ensembles, Clément Janequin and Diabolus in Musica, come together to pay tribute to a superb composer and a fateful year.

NOTE: All of the music on this program is from the recent release from the ensembles Clément Janequin and Diabolus in Musica. This is on the Bayard Musique label and is CD 308 437.2. 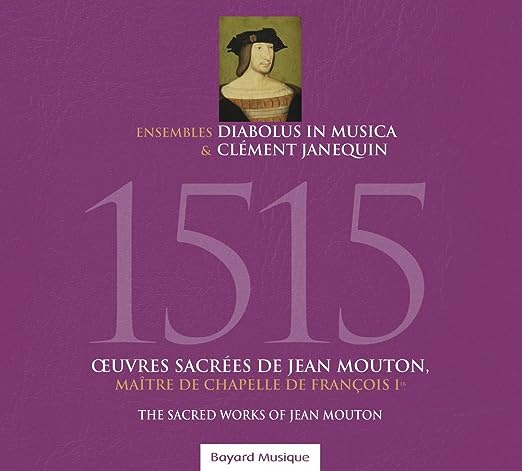 From Stephen Midgley: (5 Stars) Jean Mouton, contemporary and compatriot of 'Josquinus incomparabilis', has not been served too badly on disc - especially his setting of the exceptionally beautiful 'Nesciens mater' - and yet a great deal of his considerable output remains to be performed in modern timesecorded. The present disc makes a useful contribution to this process. Its title, '1515', refers to an important date in French history for reasons explained in Fabrice Fitch's useful booklet notes; it's enough to say here that it was, among other things, the year of an important meeting in Bologna between the new French king François I and Pope Leo X. It is rather vaguely conjectured that music must surely have been performed for the occasion and, since Jean Mouton was a favourite of both king and pope, some of his music may well have been included.

Irrespective of the pretext, this is a fine collection of the composer's music, including a Mass, a Magnificat and ten motets. The 'Missa Quem dicunt homines' is a parody Mass based on an exceptionally fine motet of that name by Jean Richafort. The Mass is a four-movement work with no Credo, its first two movements placed at the start of the disc and the Sanctus and Agnus Dei at the end. In between, we have the remaining works - the succession of nine motets in the middle perhaps offering a less-than-ideal arrangement for a CD programme. But there are many fine things, among which I especially liked 'Salva nos Domine' (track 13). Like many composers of renaissance and later times, Mouton produced some of his works in grovel mode, in other words not to sacred texts but in praise of some earthly bigwig - in the present case, one motet each for king, queen and pope.

Best of all, however, is the Mass itself, a glorious work in spite of its all-too-brief eighteen minutes. Unfortunately we don't get Richafort's model motet here for our further enlightenment - but, as luck would have it, it's available in volume one of the wonderful 'Leiden Choirbooks' series Leiden Choirbooks 1, and it can also be heard on YouTube, nicely sung by an unnamed ensemble. Jean Mouton's Mass here represents the composer's work at its very best - a master craftsman with melodic grace and profundity to match.

All these works are beautifully performed by the eight voices of two fine ensembles - Ensemble Clément Janequin and Ensemble Diabolus in Musica - directed respectively, but I presume not simultaneously, by Dominique Visse and Antoine Guerber. The high voices - one male, one female - lend an incisive edge to the vocal blend which some listeners may find disconcerting; but personally I like it, finding that it enhances presence and clarity while in no way overriding the excellent contributions of the lower voices. Clarity and expression, rather than sheer beauty of sound, are given priority here, and for me they suit the music extremely well. The sound and balance are discreetly rounded off by an organ accompaniment in some of the works, including the Mass - a fact that is nowhere mentioned in the booklet.