The longtime director of the Christ Church Cathedral, Oxford choir shares some of his remarkable history with English Choral music from Thomas Ashwell, to John Taverner, to the Eton Choirbook.

NOTE: All of the music on this program is from the recordings featuring The Choir of Christ Church Cathedral, Oxford directed by our guest Stephen Darlington. For more information on this ensemble: https://www.chchchoir.org/. 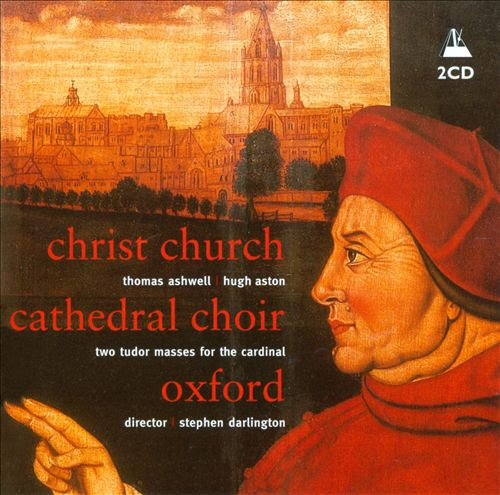 From BBC Music Magazine: The inclusion in the Heather-Forrest partbooks of these Masses by Thomas Ashwell and Hugh Aston strongly suggests that they were originally sung at Christ Church. So it is fitting that Stephen Darlington’s Oxford choristers should record these two pieces in the building for which they were intended. By their nature, collegiate choirs regularly change their personnel, and the trebles are not as firmly focused as their colleagues on Nimbus’s release of Pygott’s Veni sancte spiritus Mass. However, notwithstanding occasional blurring in the more fervent moments, Darlington’s singers here give a finely balanced account of Ashwell’s Missa Jesu Christe with bright recording underlining the composer’s clear delineation of text and vocal arrangement. Like Ashwell’s Mass, Aston’s Missa Videte manus meas is scored for six voices. But its increased polyphonic richness (with different vocal groupings neatly overlapping) more fully exploits the developmental potential of the composition’s cyclic design. Contrast, for example, the wave upon wave of imitative melismas in Aston’s setting of the Credo with Ashwell’s more direct expression of the same passage. Christ Church Choir’s controlled virtuosity throughout this repertoire’s long-breathed melodic lines makes a deep impression, bringing vividly to life striking Mass settings by two all-but-forgotten Tudor masters. --Nicholas Rast

From ClassicalNet.com:  I was intrigued by the idea of hearing one of the world's finest choirs singing music by two English composers previously unknown to me, and on a label with which I was unfamiliar. (These are first recordings.) I was not disappointed!

Both masses come from a collection of Tudor-era music called the Forrest-Heather Partbooks, whose home is the Bodleian Library at Oxford University. We know little about either composer. Thomas Ashwell, who was born around 1482 and died after 1513, was a boy chorister active in Windsor and Lincolnshire, and who eventually came to Durham, where he was master of the cathedral's priory choir. Hugh Aston was born around 1485 and died in 1558. He also held posts in several of England's important intellectual centers. He seems to have been an esteemed musician, and he, like Ashwell, apparently was spoken of in the same breath as John Taverner, who is much more familiar to us today. It also seems likely that Cardinal Thomas Wolsey was a patron, directly or indirectly, of both men's professional lives.

The masses are scored for six voice parts (boy treble, alto, two tenors, baritone, and bass) and are based on a cantus firmus. Of course both are performed a cappella. On the basis of these two masses alone, it is difficult for me to identify what stylistic features distinguish Ashwell from Aston, and Aston from Ashwell. What I can say is that both of these masses are extraordinarily beautiful. The writing is expressive and very long-lined, and the harmonies are luxurious. They are as inspiring now as they must have been in the early 1500s. My relatively limited experience with music from this era inhibits me from making sweeping statements, but to me, this music sounds as alive and imaginative as anything I've heard by Taverner.

The performances are very impressive; the only shortcoming I noticed, and it is minor, is that Christ Church's boys can sound hooty in their upper registers when they are asked to negotiate a trickily melismatic passage. The engineering is outstanding; Christ Church Cathedral itself is as much as a musician here as the men and boys of the Choir. Metronome indicates that further Christ Church recordings are coming. If they are as good as the present one, I will be happy to hear them, no matter how rare or common the repertoire may be. 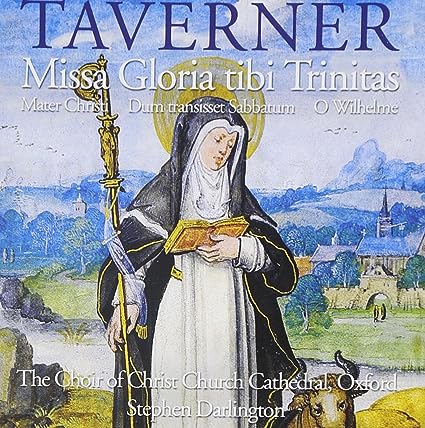 John Taverner, the most outstanding English composer of his time, was appointed Informator Choristarum of Cardinal College, Oxford in 1526, with the charge of establishing the foremost choral institution in the land. He succeeded magnificently and the tradition continues to this day at what is now known as Christ Church, Oxford, with acclaimed director Stephen Darlington, renowned for his strength in 16th century choral music, at the helm. Darlington and his forces – 16 boys and 12 men, unchanged since the 1520s – pay homage to their predecessor with a programme of his liturgical music written at Oxford. While there, Taverner had to write music to be performed virtually round the clock and he rose to the challenge using great imagination. He wrote innumerable memorable melodies, with an unprecedented emotional range and a sophisticated sense of drama. His music was astonishingly modern for its time, and in its richness remains much so today.

The Choir of Christ Church Cathedral, Oxford has a special and distinctive place within the great English choral tradition as it uniquely serves both an Oxford college and a diocese. With an unbroken, continuous tradition of glorious music-making for nearly five hundred years, today the choir is renowned for its vibrant sound and artistic versatility, qualities that have been praised throughout the world from Sydney to Rio de Janiero, Tokyo to New York, Helsinki to Paris. Apart from their Oxford duties and international tours, the Choir has been heard by millions on the Mr. Bean soundtracks and Vicar of Dibley TV theme tune.

From MusicWeb International: Recently I stood under the tower in the huge parish church of St. Botolph in Boston [details]. I had beside me the grave slab to ‘John Taverner – Musician, died 1545’. Plugged in to my portable, if somewhat outmoded, CD player, I listened to the Gloria from this mass, I felt about as close to the composer as it’s possible to be. This indeed was the church in which he had spent a great deal of his life in the town which he knew. However we do not know when he was born or where but it’s most probable that he was a Lincolnshire man as he had served an apprenticeship in the parish of Tattershall. Lord Cromwell’s castle next to the large collegiate church, which also had a fine choir, is not that far from Boston. Incidentally Tattersall Church often plays Taverner’s music as you walk around.
As the sun glittered through the clerestory windows of St.Botolph’s, windows inserted in Taverner’s lifetime, the clarity of his lines and the magnificent brightness of the late medieval church came together.

The late Colin Hand’s book on the composer (Eulenberg; London 1978) is worth finding for the sharpness of its analysis of all eight masses. Of this one he comments, in comparing it to the vast ‘Missa Corona Spinea’ (p. 46), that "it reveals even greater mastery of construction and balance and may justifiably be regarded as Taverner’s finest work". To create this balance Taverner is always varying textures with long sometimes quite melismatic sections for two or three solo voices contrasted with full choir, then lower voices only, then higher ones. In addition the complex ‘In Nomine’ section of the Benedictus was long admired by Elizabethan and later composers as an example of ideal counterpoint over the plainsong tenor. It was used for didactic purposes no doubt and also as a basis of many other ‘In Nomines’ including those by Purcell and more recent composers; indeed I have used it myself. Also, each movement begins in more or less the same way using a technique called a ‘head-motif’.

For me, this is, in fact the third recording I possess of this mass. They are all quite different. The Taverner Choir under Andrew Parrot put the mass into its liturgical context as was common practice in the late 1980s with therefore, yards and yards of plainsong (on EMI nla). Then I have a wonderful recording on Glossa (GCD 921401) called ‘The Marriage of England and Spain’ which puts the mass into a supposed context of the royal marriage surrounded by motets and instrumental pieces by other English and Spanish composers (The Orchestra of the Renaissance under Richard Cheetham). Cheetham gets through the music quite a bit faster than Darlington as the instruments seem to want to move the polyphony forward. I also own a recording by The Sixteen on Hyperion, a version which has been called ‘intimate’ and which was recorded in 1984 (CDA55052). There is also a version by The Tallis Scholars, which I don’t know, but both of those groups use women on the soprano lines and quite often in the alto lines too. So why should I keep this new version?

Stephen Darlington writes in the booklet ‘The Choir of Christ Church Cathedral’s recording is the first to use the original forces of men and boys as envisaged by the composer’. That is why this recording is precious. The choir, or more especially Stephen Darlington, is not new when it comes to Taverner. In 1990 Darlington recorded the rather simpler ‘Missa Mater Christi’ for Nimbus (NI 5216) in its liturgical context. In 1993 he recorded a series of motets, including the ‘Dum transisset sabbatum’, recorded also on Nimbus (NI 5360) on a disc called ‘Ave Dei Patris Filia’. Darlington therefore knows the difficulties that can occur when boys tackle this repertoire.

It has not been common to hear boys in early Tudor church music and there are only a few examples. The reasons are various. The tessitura is mostly much higher than the norm nowadays, putting considerable strain on the voices as passages are rehearsed and re-recorded so that a huge mass must be ‘canned’ over several sessions. Secondly the music is difficult, rhythmically so, and it takes boys with ‘nouce’ to pick it up quickly. By the time a boy has the musical intelligence and experience to tackle the music, especially if you are using him in the soloistic sections (often the most complex) his voice is on the verge of breaking. Even so, there are times when that typically pushed and slightly distorted vowel sound is heard in a painfully long phrase and when intonation is a little suspect, Darlington also encourages a kind of continental vibrato which may not always appeal, but on the whole this is as good a recording of a male voice choir singing polyphony as you ever encounter. So, an especial thank-you is required to all concerned not least the recording engineers to allow us a chance to listen to this music, though without much plainchant, as Taverner probably heard it.

The supporting motets which Darlington has recorded before, including a more interesting and faster performance of the ‘Mater Christi’ motet than in 1990, and plainchants are equally beautifully performed and recorded. The whole enterprise is nicely presented, very similar in look to the Nimbus presentation of the earlier Taverner discs mentioned above. Full texts are offered along with an excellent essay by Andrew Carwood and photographs of the choir.

If you love this music then you should not hesitate to get this disc and if Taverner is new to you, then this great masterwork of the early 16th Century is as good a place to start as any. This recording gives the music every chance to be at its best.