You are here: Home / Playlists / Taverner and the Court of Henry VIII

The Taverner Consort & Players are back with a superb new recording including the incomparable Western Wind Mass by the composer for whom the group was named.

NOTE: All of the music on this program comes from the recording Western Wind: Mass by John Taverner & Court Music for Henry VIII featuring the Taverner Consort & Players directed by Andrew Parrott.

From Andrew Benson-Wilson: When I first saw the cover of this CD and the names of the performers, I started looking to see if this was a re-release of an earlier recording. But it is a new recording, made in 2015, featuring the distinguished names of singers Emily Van Evera and Charles Daniels, alongside Andrew Parrott and his Taverner Choir and Players. Most recordings or concerts based on a Mass setting interweave vocal motets around the usual Mass movements in an attempted liturgical reconstruction but, very refreshingly, this CD incorporates a miscellany of instrumental and vocal music related to the Court of Henry VIII alongside The Western Wynde Mass by John Taverner, an almost exact contemporary of the King.

The CD opens with a solo recorder, playing the 16th century melody of Westron wynde before the chanted Kyrie. As was usual in English mass settings of this period, the Kyrie is not set polyphonically. The ebullient opening of Taverner’s Gloria immediately set the two featured soloists alight, with the extended passages for upper voice and tenor, the full choir joining in periodically, to great effect. In complete contrast, the Gloria is followed by the lovely little My lady Careys dompe, played on the harpsichord by Steven Devine with lots of finger-twisting and occasionally rather convoluted addiditional twiddles. It is as though we are on a tour of one of Henry’s Palaces and are popping our head into various rooms to catch musicians plying their wares. Back in the Chapel, the Credo then bursts in, followed by the distinctive sound of a mute cornet and two sackbuts playing one of Henry’s own ditties.

The western wynde is an extraordinary mass setting, raising more questions than it answers. Its grandeur suggests that it could have been written during his time as organist at master of the music (informator) at Cardinal Wolsey’s new Oxford foundation (now Christ Church College). But internal evidence also suggests a later period, when he entrenched himself safely away from Oxford and London religious politics in Boston, Lincolnshire. This seems to be the first time an English composer based a mass setting on a non-sacred melody, in this case, the entirely secular song whose only reference to “Cryst” is in reference to wishing that his lover was in his arms, and in his bed, blown there by the apparently reluctant western wind. It has an interesting musical construction, with the cantus firmus repeating nine times in each movement, in different voice parts, in effect creating 36 variations on the melody spread over the four mass movements. He manages to make all four sections about the same length by using extended melismas in the otherwise shorter movements. 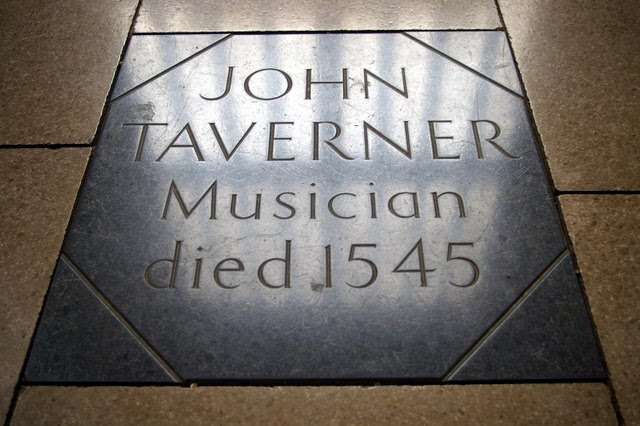 Between the Sanctus and the low entry of the Agnus Dei, we hear the delightful twang of Kirsty Whatley’s harp in My lady Wynkfylds rownde, from the same royal manuscript as My lady Careys dompe. After the Mass setting, the programme continues with a variety of secular and sacred music from the likes of William Cornysh (the younger), Hugh Aston (his remarkable Hornepype), and Henry VIII himself. Along with smaller instrumental and vocal forces, the full 15-strong choir returns for two other Taverner pieces, his Audivi vocem de caelo and Dum transisset sabbatum, both final responds for Matins. These are separated by the famous, but later, keyboard transcription (here replete with added twiddle) of Taverner’s In nomine from the Benedictus of his Gloria tibi trinitas mass. The eight instrumentalists are amongst the finest around, with notable contributions from the two already mentioned (Steven Devine and Kirsty Whatley), plus Gawain Glenton, mute cornet, William Lyons, shawm, and Uri Smilansky, viol and recorder. Emily Van Evera and Charles Daniels are, of course, outstanding in their vocal contributions.

The choir produce a delightfully integrated sound. Those who know Andrew Parrott’s work and writings will not be surprised that the pitch is lower than many recordings, and uses female altos rather than counter-tenors – a very refreshing sound. The CD was recorded in an Oxford church, with a vibrant acoustic that suits the vocal music slightly more than the more intimate secular domestic music. But the implications of changing acoustic to suit the various instrumental and vocal forces would be more disturbing. Following the close focus ear-battering of the ‘loud winds’, the opening of Audivi vocem de caelo is recorded at a distance, representing the practice of having five candle-wielding boys (representing the wise virgins) singing towards the altar before finally turning to face the rest of the choir. The CD finishes as it started, with vocal and instrumental versions of Westron wynde.