You are here: Home / Playlists / The 14th Century From Music Web International: :Ensemble Gilles Binchois and Dominique Vellard here repeat the successes of their earlier recordings. If you don’t yet know Guillaume de Machaut’s Messe de nostre Dame, usually regarded as the first Mass setting planned as a complete cycle, their recording of several years ago remains my benchmark and it’s available as a real bargain from Brilliant Classics in a 3-CD package of Machaut’s music, sacred and secular, and poetry, for around £10.50 – around the same price as a download, though almost three times as much from some dealers (94217). Andreas Scholl and Gerd Türk, then early in their careers, are no longer part of the line-up but the standard remains high and the distinctive style of the Ensemble is still recognisable.

The music on the new recording comes from manuscripts associated with the papal court at Avignon and the royal court of Catalonia. Only two of the composers are known, Machaut’s contemporary Philippe de Vitry, and the later and less well-known Johannes Tapissier. Though neither of these Masses seems to have been composed as a complete cycle, those who love Vellard’s recording of the Machaut will find themselves at home with the new album.

Those who favour the earthier style of singing the music of this period should look elsewhere – there must be some who do, because the recent Harmonia Mundi reissue of the Machaut from Marcel Pérès and his Ensemble Organum, which I disliked, received a five-star accolade from BBC Music Magazine (HMO8901590 – Autumn 2018/3). I have, of course, no firm evidence at all to support a preference for the smoother style of Ensemble Gilles Binchois, or Gothic Voices to name another group whom I favour in the music of this period; there's just no contest in my book.

I also liked Vellard’s earlier recording of the music of Heinrich Isaac, the 6-part Missa Virgo prudentissima, though there is also a fine recording of that from Christophorus which I thought displayed complementary virtues (EVCD023 – DL News 2016/6). That’s no longer available from emusic.com, which has suffered a sad decline in the last year or so and is no longer worth subscribing to for classical music or jazz. The Isaac CD is currently out of stock from some dealers, but it can be downloaded in lossless sound for around £10, as can another enjoyable Vellard recording Fons Luminis – Sacred Music from Codex las Huelgas, c.1330 (EVCD051 – Summer 2018/1) as can the new release. Some dealers seem to have Fons Luminis on CD only, others as a download only.

None of the music on the new recording is of the same high standard as that of Machaut or Isaac; I’d recommend Vellard’s recordings of both first, but having heard either you are likely to want to add in fairly short order this recording of the Masses of Barcelona and Apt.

As on the earlier releases, Evidence Classics offer a convincing recorded sound and the notes in the booklet are helpful and informative, together with photographs of the instruments employed in the interludes, two vièles à archet (bowed vielles) and a guiterne (gittern).

The booklet doesn’t explain what is meant by a ‘Gloria avec trope’, ‘Sanctus avec trope’ or ‘Kyrie avec trope’. Before the liturgical reforms of the sixteenth century, it was common for these three sections of the Mass to be ‘troped’ with extra words, longer than the original in the case of the opening Kyries, expanding the attributes of the Father, Son and Holy Spirit. There are several examples of this in the most common usage in England, the Sarum Missal, and these were sometimes included in musical settings. Something similar happened in the English Prayer Book in 1552 when the nine-fold Kyries were expanded into responses to the Ten Commandments and in Lutheran usage where Christmas additions were made to the Vespers canticle the Magnificat, hence the existence of two settings of this by Bach, one with and one without additions. The Sanctus of the Mass of Barcelona is the most extreme example here, expanded many times beyond its original scope; all the additions to the text are distinguished in the booklet by being placed in italics.

The Ensemble Gilles Binchois has been delighting us with recordings of medieval and renaissance music for some considerable time; that Machaut Mass was recorded in 1990. Many of their earlier recordings for Virgin Classics remain available from Erato, often as super-budget twofers. Sadly, however, some of these can now be obtained only as very expensive downloads at around £30.

Several of these Virgin releases have been mined for a recent Warner Classics 2-CD set at budget price The Da Vinci Sound, where they are joined by the likes of David Munrow’s Early Music Consort (9029550696). That’s a bit of an opportunistic piece of marketing when there is new-minted material to be had, such as Coro’s Leonardo: Shaping the Invisible (COR16171 – review), but it is well worth investigating.

Better still, however, are the Ensemble’s original albums on the one hand and their three recent Evidence recordings on the other. Of the three this may be my lowest priority, but that’s due to the appeal of its predecessors rather than any shortcomings.

This new release joins the earlier recordings from the Binchois Ensemble high in my esteem. 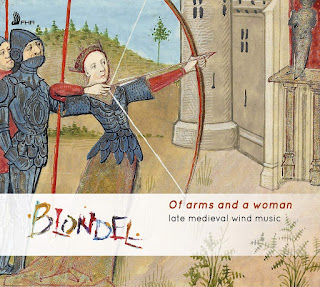 In 1410 Christine de Pizan (1364–c. 1430) produced an extraordinary book called The Book of Fayttes of Arms and of Chivalrye (Livre des fais d’armes et de chevalerie): a manual on modern warfare. It was commissioned by Jean, Duke of Burgundy as a gift to the 12-year-old dauphin, Louis de Guyen, it earned her a payment of two hundred livres from the royal treasury, and it was at least as influential in its time as Niccolò Machiavelli’s The Prince.

Henry VII owned a copy and commissioned an English translation. The book was in Elizabeth I’s library, along with several other of Pizan’s works. There is a copy bearing Napoleon’s mark in the Bibliothèque National in Paris. Henry VIII, on the other hand, turned to Il Principe for guidance.

The Livre des fais d’armes et de chevalerie included extensive reflections on the theological and ethical implications of conflict. Pizan argued that the only honourable war was a just war, fought by Kings in the name of God, and in doing so conveniently paved the way for the introduction in France of an edict outlawing nobles from raising armies for their own, potentially treacherous, purposes.

The book begins, conventionally enough, by laying out historical examples and philosophical analyses designed to buoy the faltering conscience of a neophyte monarch, but its scope is far more ambitious. The bulk of the work is devoted to the nitty gritty of combat: strategy, assembling an arsenal, siege techniques, and paying and feeding an army. It was, above all else, a practical guide written in the vernacular, explicitly targeted at middle class professional soldiers who, although literate, wouldn’t necessarily understand Latin.

Christine de Pizan was a forthright feminist, a writer, political theorist, royal agony aunt and the author of self-help books commissioned by the highest in the land. She was born in Venice, but spent most of her life in France. Her father was the King’s astrologer, and her husband, Estienne de Castel, a royal secretary.
The fragility of her family’s charmed existence was exposed when astrology fell out of favour at court and her father lost his post; he died in 1386 leaving behind debts. Then in 1389 Estienne died without warning (possibly of plague), also in the red; Christine was twenty-five and a widow. Facing bankruptcy, and with three children, her mother and a niece to support, she took up her pen and began to write romantic poetry.

It didn’t take her long to attract wealthy patrons. She had spent her childhood rifling through palace libraries, and she knew her market; after all the life of a nobleman wasn’t played out entirely on the battlefield. On home turf the knight was transformed from warrior to social ornament: an accomplished musician, poet, and sportsman, and a master of the art of courtly love. His life became a work of art, played out according to the rules of court etiquette.

In the world of chivalric romance the women are impossibly beautiful, unapproachably noble, and usually married to somebody else. The men are correspondingly good-looking, selflessly devoted, and fearless in combat. But perfect love cannot withstand reality – betrayal, a change of heart or the ordinariness of everyday life; the lovers are trapped outside the narrative, their fate determined by a battle between love and life itself. The outcome was never in doubt – love must survive, and so the lovers must die, or at least threaten to.

There can never be a happy ending. Turn the page of any chansonnier and the story plays out once again. Another lady, another knight in shining armour, another Tristan, another Iseult, another doomed love affair.

In her lifetime Christine was accepted as one of the foremost writers and thinkers in Europe. Her reputation today rests on her determination to give women a voice, and it is this that sets her apart from her contemporaries. She believed that since both women and men are built in God’s image, they are intellectually and morally identical; both equally susceptible to vice and capable of wisdom and goodness. In her view, unless women were given the same audience as men, the same education, accorded the same attention when they spoke and wrote, the subjugation of women was inevitable – they would live invisible lives as perpetual bystanders, and die leaving barely a trace of a memory, a shadow in the historical record.

One day I was surrounded by books of all kinds... my mind dwelt at length on the opinions of various authors whom I had studied... it made me wonder how it happened that so many different men – and learned men among them – have been and are so inclined to express... so many wicked insults about women and their behaviour... it seems that they all speak from one and the same mouth...