You are here: Home / Playlists / The 15th Anniversary Special

NOTE: Our special guest for this program is Martin Goldsmith, host of NPR’s Performance Today.

Preservation of this program is made possible by a generous grant in memory of Kay Anne Ewers.

He studied history, medieval Latin, theology, and liturgical history which helped him to gain extensive background knowledge for his musicological research. Under the Ruhland's leadership, a group of enthusiastic students in Munich formed a "Capella Antiqua" in 1956: known as the Capella Antiqua Munchen, this group was one of the first to tackle the problems of reviving Early Baroque and Renaissance music using a scholarly approach.

Until his death Ruhland continued to communicate his theoretical knowledge and the practical experience to students in numerous courses, music weeks and summer schools, including the summer school at the University of Philadelphia. He was also a much sought-after choir director and had extensive experience in this field. 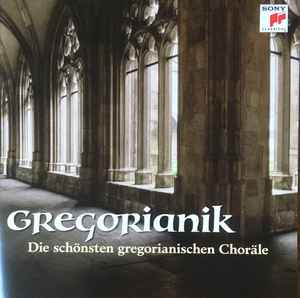 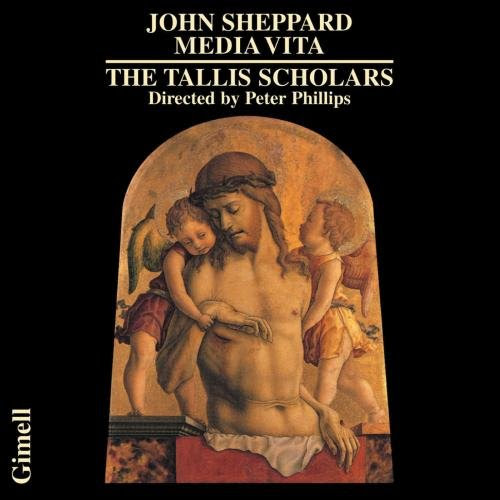 From Amazon: John Sheppard's (c.1515-1559) most important music was written for the Church, either as hymns, responds or Mass settlings. His style is immediately recognisable since much of his writing was for the same six part choir of treble, two countertenors, tenor and bass, which he used to achieve the maximum sonority; he used the treble voice with unusual flair. Some of his harmonies were also exceptionally daring by the standards of his time.

All the music included on this disc is based on chant. 'Verbum caro' and 'Reges Tharsis' are responds for Matins on Christmas Day and Epiphany respectively, and the 'In Manus Tuas' (settings from Compline on Passion Sunday to Wednesday in Easter Week) also have a respond structure. All three of these are founded on the same chant melody. 'Christe Redemptor omnium' and 'Sacris solemniis' are hymns from Lauds on All Saints Day and Vespers at Corpus Christi respectively, each with a sequence of verses which alternate chant and polyphony.

'Media vita' is a unique achievement in its length, expressive power and liturgical function. The text consists of the antphon to the 'Nunc dimittis' at Compline on the major feast-days in the two weeks before Passion Sunday. The composition begins with some of the most haunting words in any of the Offices:'Media vits in morte sumus' (in the midst of life we are in death). It was in setting these words that Sheppard conceived one of the greatest passages in all Tudor polyphony.

What can be said about the Tallis Scholars that has not already been said!? WELL! They continue to enrich and enlighten our lives with their excellent rendition of music by composers that we would not have known about prior to their MANY recordings. This one was recorded in 1989. They are superb ensemble singers as well as individually skilled soloists. Their sound is ethereal and their emotional investment is always at the highest level. Peter Phillips has shown through the years his ability both as a competent conductor and indeed an Early Music Specialist. 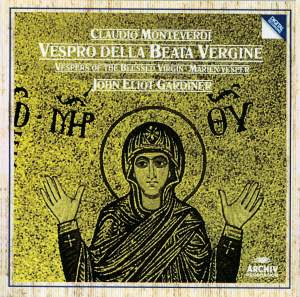 From Gramophone: Monteverdi’s Vespers is an iconic work in more ways than one. For the composer, who published it 400 years ago in 1610, it was a calculated summation of his skill as a writer of sacred music at a time when he most needed to advertise it. Aged 43, and largely known as a madrigalist, he wanted to escape the frustrations of working at the court of the Gonzaga dukes in Mantua and find a new job, ideally at the Papal chapel. In the event, the publication almost certainly helped him gain a prestigious alternative, the post of maestro di cappella at St Mark’s in Venice, which he would keep until his death in 1643.

For us today, however, the work has become one of the great pillars of the Baroque vocal-and-orchestral repertoire, a staple of the living canon that, like Handel’s Messiah or Bach’s B minor Mass, is almost guaranteed to sell out in concert. And this is in spite of the fact that its performance history is relatively short; the first full public performances were in the 1930s and the first recordings in the 1950s, making the Vespers an essentially modern presence. Indeed, its growing familiarity and reputation can be seen as iconic of something that Monteverdi himself would have had difficulty comprehending. For the story of the rise of the Monteverdi Vespers is the story of the post-war early music movement.

Nothing could be more obvious after listening to the nearly 30 performances to have made it onto CD, the earliest from 1966 and the latest from 2007. For indeed much of early music life is here. Many are the threads one could follow in a chronological trawl through five decades of Vespers recordings, including the dramatic improvement in the standard of playing on period instruments, the rediscovery of singing styles and techniques appropriate to the music (including the growth in one-to-a-part vocal ensembles), the fluctuating pull between musicological and artistic concerns (with the occasional entertaining spat between the individuals involved), and the role that recording itself has played in raising the public’s appreciation of early music. Then there is the sense of community: a singer might appear several times (tenors Nigel Rogers, Ian Partridge and John Elwes for instance, or sopranos Maria Cristina Kiehr and Tessa Bonner); the cornett lists are dominated by the names of Jean-Pierre Canihac, Jeremy West, Bruce Dickey and Doron David Sherwin; several husbands conduct their wives; and musicians who have directed their own performances can be found playing in orchestras for others. It all seems to point to one thing: that, in a sense, the Vespers of 1610 is modern-day early music.

The sum of many parts

Perhaps the most remarkable aspect of the Vespers’ success is that in all likelihood it is not really “a work” at all, and that Monteverdi may well have never heard it performed as one. The 1610 publication was entitled Missa…ac Vespera…cum nonnullis sacris concentibus [Mass and Vespers, with some Sacred Concertos], and while some movements are standard components of Vespers – the Responsorium (“Domine ad adiuvandum”), the five chant-based, polyphonic psalm-settings (“Dixit Dominus”, “Laudate pueri”, “Laetatus sum”, “Nisi Dominus” and “Lauda Jerusalem”), the hymn (“Ave maris stella”) and the Magnificat (of which Monteverdi offered two settings, one in six parts, and the other a seven-part elaboration of it with instruments) – the same cannot be said of the Mass, the sacred concertos “Nigra sum”, “Pulchra es”, “Duo seraphim” and “Audi coelum” (in effect up-to-date early Baroque motets for solo voices and continuo), or the principally instrumental Sonata sopra Sancta Maria. In short, a liturgically correct service cannot be made from the Vespers as it stands, so that it begins to look not so much like a self-contained work as a resource book showcasing pieces in various new and older styles that Monteverdi had composed during his time in Mantua – albeit arranged against the background shape of
a Vespers sequence.

Some scholars have argued that, like the obviously separate Mass, the concertos were added to the publication as a kind of bonus and never intended to form part of the Vespers (Denis Stevens even recorded the work without them in 1966, which is perhaps going a little too far to make a point). A generally accepted view, however, is that, since most set Marian texts, they were intended as permissible substitutes for some of the service’s plainchant antiphons. This conveniently allows them to be included even in those performances that attempt to create a liturgical context by interpolating appropriate chant, even if in those cases considerable reordering and rejigging of items is often necessary. Other performances ignore these problems altogether, however, and simply present the Vespers as it appeared in print.

In the end, though, such matters can be considered secondary for, whether by accident or design, Monteverdi’s ordering of pieces comprises a concert work of about 80 to 90 minutes in length that is perfectly convincing to modern ears. The alternation of solo and choral numbers has the same logic as a Bach or Handel oratorio, and while the long and contemplative Magnificat that ends the work may seem unconventionally ethereal, its two-minute final chorus makes for a stirring conclusion. And nothing can obscure the brilliance, beauty and power of Monteverdi’s music, so full of unforgettable moments – from the neck-tingling splendour of the opening Responsorium to the sensual intimacy of the duetting sopranos in “Pulchra es”, the dizzying virtuosity and exoticism of three tenors in “Duo seraphim” to the wind-down ending of “Laudate pueri”, and the commanding, Orfeo-like tenor roulades of “Audi coelum” to the masterly instrumental composition that is the Sonata sopra Sancta Maria, over which Monteverdi ingeniously lays a chanted soprano prayer, “Sancta Maria, ora pro nobis”. 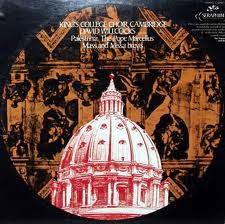 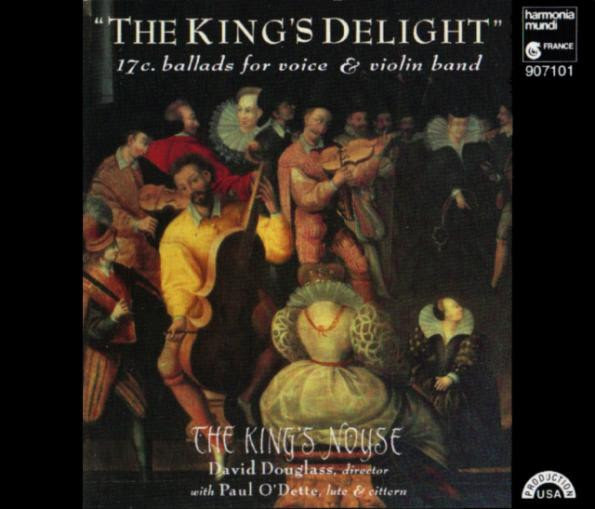 Although the music here is highly entertaining in itself, this CD should really only be heard after studying Jack Ashworth's informative booklet notes, and preferably also with some knowledge of 16th and 17th century English music. This period in English musical history is generally associated with the "viol consort" in which a group of differently-sized "viols" or "violas da gamba" played together with the musicians sitting around a set of notes, sometimes accompanied by a recorder or voice. This kind of music is quite ethereal but probably does not reflect the reality of life in early 17th century England (the epoque of Shakespeare, Webster and Jonson). In recent years it has been established that not only the nasal-sounding "viol", but also the violin was played "in consort", and various musicians have gone about re-creating this sound. Among the first were The Parley of Instruments in England and The King's Noyse in the USA, who here present their first-ever disk containing so-called "broadside ballads", interspersed with dance tunes, some of which have been delivered down to us in manuscript, others of which are of more traditional nature and have been arranged by David Douglass for this particular variety of consort. There are also three solos by that miracle of lute-playing, Paul O'Dette, using a different instrument each time. The effect of the whole is quite "folksy", approaching in some ways a "crossover" approach. The gentle strings of the instrumental pieces are captivating, while Ellen Hargis does a great job of making her ballads sound as they might have done in a 17th century tavern, including using a regional English accent. Her singing is, of course, not always "beautiful", with some quite harsh leaps and the recording venue producing some pretty sharp echoing at louder points - not something everyone will appreciate, but definitely contributing to the "authenticity" of the recording, insofar as there can be such a thing with music from such a distant period.