You are here: Home / Playlists / The Cardinall’s Musick Tallis Edition

Our friend Andrew Carwood continues his series with a mix of both Catholic material and Anglican compositions by the English Renaissance master.

NOTE: All of the music on this program is from the recording Tallis—Ave, Dei patris filia featuring The Cardinall’s Musick directed by our guest Andrew Carwood. It is on the Hyperion label and is CD# CDA68095. For more information on this ensemble: 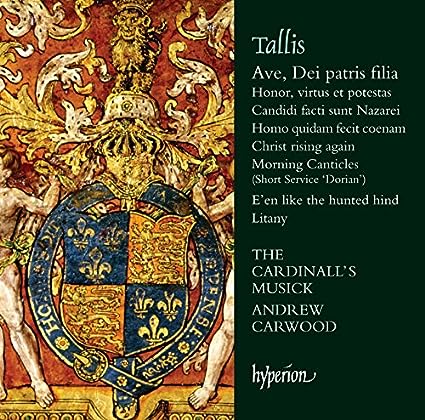 The sprawling majesty of Thomas Tallis’s Ave, Dei patris filia is brought to startling life here by both the fine voices of the Cardinall’s Musick and the scholarly detective work of David Allinson, who reconstructed missing sections in the treble and tenor parts, noting the piece’s close similarity to a similar example by Robert Fayrfax. It’s a remarkable achievement. The florid word-setting of this Latin piece is in marked contrast to the one-note-per-syllable post-Reformation English settings that make up the majority of the disc. Canticles, responses, Te Deum and the Litany are all sung with an almost string-like quality of tone and perfect unanimity. —The Guardian

We also paid tribute to the former Director of Music at St. Paul’s, John Scott, who died August 12, 2015. We use one of the Psalm settings from the vast boxed set of The Psalms of David: The Complete St. Paul’s Cathedral Psalter (Hyperion CDS 44101-44112). 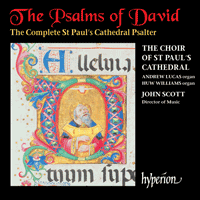 'Will surely remain unique for many decades' (Gramophone)
'All Old Testament life is here … how useful to be able to hold such a big chunk of English culture in a box five inches square' (The Times)
'Hyperion is to be congratulated for releasing these discs … A gem; beautiful language, wonderful music, superb accompaniments, magnificent singing. Buy this and relish in its freshness' (Cathedral Music)
'Scott and his choir explore the essential musical core of Anglican worship, soaring high above the ordinary and fully exploiting the reverberant acoustics of Wren’s cathedral' (Music Week)
'a landmark in choral recordings and a uniquely serene, sweet listening experience' (San Francisco Chronicle).

From The Guardian:
John Scott, who has died aged 59 of a heart attack, was a world-class organist and gifted choir trainer. Since 2004 he had been organist and director of music of Saint Thomas Church, Fifth Avenue, New York, and before that of St Paul’s Cathedral, London.

His association with St Paul’s began in 1978, as assistant organist both there and at Southwark Cathedral, south of the River Thames, and he also accompanied the Bach Choir, conducted by David Willcocks (1979-91). As organist and director of music at St Paul’s from 1990, John made many recordings with the choir for the Hyperion label, and directed it in services for the 100th birthday of the Queen Mother, the victims of 9/11, and Queen Elizabeth’s Golden Jubilee in 2002, which he marked with his own anthem, Behold, O God, Our Defender.

A man of deep faith and quiet integrity, John cared about the liturgy, set exacting standards and achieved a rare quality of performance: every service was important. Many of the singers he guided went on to become professionals, while Alastair Cook went on to captain England at cricket. John’s organ concert cycles at St Paul’s included music by César Franck, Dietrich Buxtehude and JS Bach.

He often found the hierarchical nature of St Paul’s frustrating, feeling that musicians should be left alone to do what they do best. On his departure, he was appointed LVO (Lieutenant of the Royal Victorian Order).
Once in New York, John built on the reputation of the Saint Thomas Choir of Men and Boys as the leading Anglican choral ensemble in the US, established through their recordings, tours and live webcasts. He made every member of the choir feel part of the whole, raising the standard to a level not previously thought possible.

His appearances as a soloist at the BBC Proms included Julius Reubke’s Sonata on the 94th Psalm (1977) and Alun Hoddinott’s Organ Concerto (1979). Last year, he played in the concert marking the return to service of the refurbished organ at the Royal Festival Hall in London. A fortnight before his death, he gave the premiere of Anthony Powers’ O Gott, Du Frommer Gott at the Three Choirs festival in Hereford Cathedral, and then undertook a recital tour of mainland Europe before returning to New York. His organ recordings include the two organ sonatas of Edward Elgar and the complete organ works of Mendelssohn and Maurice Duruflé.

ADVERTISEMENT
John was born in Wakefield, Yorkshire, to Gavin, a general physician, and Hetty (nee Murphy). As a boy he was a chorister at Wakefield Cathedral and while still at Queen Elizabeth grammar school gained the diplomas of the Royal College of Organists and won prizes. As a teenager, he would regularly accompany Wakefield Cathedral Choir: before one concert in a local church, the organist there described the instrument as “rubbish”, but John made it sound so good that the campaign to have it replaced was put back by years.
As organ scholar at St John’s College, Cambridge (1974-78), he worked with the outstanding choir trainer George Guest. His organ teachers were Jonathan Bielby, Ralph Downes and Gillian Weir, and he won the Manchester International Organ Competition (1978) and the Leipzig International Bach Competition (1984).

John co-edited two volumes of choral music for Oxford University Press: Ash Wednesday to Easter for Choirs and Epiphany to All Saints for Choirs. These and his edition of The St Paul’s Psalter are used in churches throughout the world.

In 1979 John married Jane Lumsden, and they divorced in 2010. In 2013 he married Lily Ardalan, who is expecting a baby. He is survived by Lily, and by Alex and Emma, the children of his first marriage.