You are here: Home / Playlists / The Cusp of the 16th Century

Music inspired by the circle of Raphael, love songs from Venice, and the imagination of Marco dall’Aquila. At the end of the 15th century, a young Roman shepherd discovered by accident the remains of the ancient palace built by Emperor Nero, the Domus Aurea or golden house. Thereafter, all the great artists of what history today calls the Renaissance launched a movement aspiring to a return to the times of Latin splendour.

Amazingly vigorous, this erudite and exciting disc recorded by Roberto Festa's Daedalus ensemble leads us to rediscover the musical side of this school, of which Virgil was the model, and which would leave its mark on the whole of 16th century Europe. Daedalus includes such illustrious names as Pascal Bertin, Josep Benet and Josep Cabré. 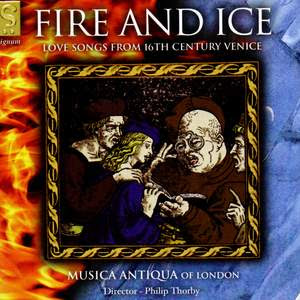 In the late 15th century, Italy was divided between the independence of the mighty Venetian Republic and tiny Dukedoms such as Ferrara and Mantua. Music and literature were patronised by the ruling classes as statements of power and local identity. However the most revered European composers were from the north, and their musical style owed little to Italian culture.

In northern Italy an educated classicist, Isabella Marchioness of Mantua, devised the frottola where text was set to a simple melody following speech rhythms, and accompanied by 2 or 3 instruments. The frottola is a Cinderella of Renaissance song and has suffered in comparison with the English and Italian Madrigal and the French Chanson in the 2oth century revival of interest in Renaissance music.

On Fire and Ice we present frottole taken from a Venetian manuscript, compiled around 1520, to argue the case for a re-evaluation of this repertoire. The collection is notable for the quality of both the poetry and the music. The texts deal frequently with emotional extremes - the “fire and ice” of our title!

Modelled on the court bands of the 16th century, Musica Antiqua is the only group in Great Britain to play on specially commissioned matched sets of viols and recorders, copied from 16th century originals. This CD offers a rare opportunity to hear the very different sound these instruments make compared to their "modern" counterparts from the 17th and 18th centuries. With lutenist Lukas Henning, Glossa unveils a striking new talent as he presents Bella incognita, a recital devoted to the enigmatic 16th-century Venetian composer Marco dall’Aquila, a musician frequently referred to in the sources but one who is difficult to characterize. With the increased use of the six-course instrument, writing for the lute became more polyphonic, with a greater level of complexity and frequently making use of existing musical works such as the chanson Il est bel et bon by Pierre Passereau; the system – called tablature – of graphically representing this complexity was introduced as the 16th century commenced.

Curiously, Marco made an early petition to hold the rights to the printing of tablature in Venice. Yet apparently, no imprints from him appeared and very little of his own music was printed for some three decades. The story of how some of Marco’s music has survived to this day and the relationship that his kind of compositions – often Ricercari but also an early example of a Fantasia – had with the paintings of Giorgione is engagingly told by Lukas Henning in the booklet essay to this new recording.

Henning, whose credentials as a performer and as an investigator are backed by his having studied at the prestigious Schola Cantorum Basiliensis – and with no less a star in the lutenist firmament than Hopkinson Smith –, intersperses this new selection of works by Marco dall’Aquila with some of his own sympathetic and informed compositions – including a delightful piece which explores the nightmare of breaking a string!