You are here: Home / Playlists / The Florentine Renaissance 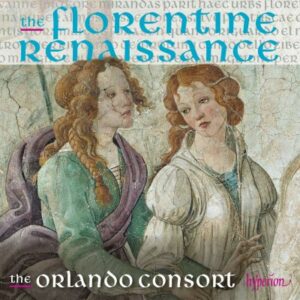 Angus Smith of the Orlando Consort takes us to the beautiful city of Florence in the 15th century, from Dufay to Binchois, to Isaac (with plenty of anonymous works thrown in).

NOTE: All of the music on this program features the Orlando Consort and our guest Angus Smith. The recordings are on the Hyperion label and is CD CDA68349. For more information on this ensemble:

From Early Music America: The Florentine Renaissance is not untrodden territory. Musically speaking, it might be one of the better-plumbed moments. From the wealth and power of the Medicis to spellbinding art and architecture to the religious turbulence in Savonarola’s wake, 15th-century Florence is understandably often called a Golden Age.

The work most associated with Florence during this time is undoubtedly Guillaume Du Fay’s ceremonial motet Nuper rosarum flores (“Recently the rose blossoms”), composed for the dedication of the famed Duomo in 1436. It is apropos, then, that it begins this latest recording by the four-voice Orlando Consort.

From there, the album progresses chronologically through other works by Du Fay and then by Heinrich Isaac, as well as numerous anonymous pieces.

But a standard treatment of the Florentine Renaissance this is not. In conjunction with research by musicologist Patrick Macey, who authored the detailed liner notes, the album presents a surprising number of premiere recordings. Isaac’s Corri, Fortuna (“Turn [your wheel], Fortune”) is newly underlaid with a poem by Serafino Aquilano, while lost voices were reconstructed for his Lasso quel ch’altri fugge (“Alas that which others flee”) and for Canto dello zibetto (“Song of the Civet”), with text by Lorenzo de’ Medici himself.

In addition to these exciting debuts, the album also emphasizes less familiar repertory, especially the then-ubiquitous laudas and a host of songs for springtime and Carnival. Lauda texts were often sung to other well-known tunes. Vanne mio core (“Go, my heart”) was, apparently, sung both to Du Fay’s chanson Va t’en mon cueur and Gilles Binchois’ Pour prison’, both of which are sweetly sung here.

The penitential lauda O maligno e duro core (“O hard and evil heart”) is sung to the same tune as the Carnival song Canto de’ profumi (“Song of the perfume-makers”), the latter slyly effective, the former a bit slower and more poignant. Similarly, Savonarola’s gentle lauda Che fai qui core? (“What are you doing here, heart?”) borrows the lively May festival tune Ben venga maggio (“Welcome to May”).We are also treated to the one piece that Savonarola himself might have composed: the monophonic Ora mai sono in età (“Now I am at the age”).

The Orlando Consort is known for their careful attention to blend, balance, phrasing, and interpretation, and the four members do not disappoint here. Their uniformity in some of the more homophonic passages really stands out, as in Du Fay’s Mirandas parit haec urbs Florentina (“Wonderful [girls] this city of Florence bears”) or the anonymous Quando riguardo el nostro viver rio (“When I consider our evil life”). Some of the standouts on the album are the punchier up-tempo numbers, such as Isaac’s Corri, Fortuna and the anonymous Viva, viva in nostro core (“Long live in our hearts”).

But the three larger Isaac motets that close the album are also real treats: Prophetarum maxime beautifully celebrates Florence’s patron saint, John the Baptist; the tender Quis dabit capiti meo aquam? (“Who will give my head water?”), written for Lorenzo’s sudden death in 1492, borrows from his own Missa salva nos; and Quis dabit pacem populo timenti? (“Who shall give peace to a fearful people?”) begs the now-deceased Lorenzo for peace, building to a stunning end.

In some of the more boisterous, bawdy works, though, I feel like they are a bit too straightlaced. I wouldn’t have minded a bit more wink-wink nudge-nudge in something like the Canto dello zibetto, for example. Overall, though, it’s a fine album with much to offer, both in the excellence of its research and the quality of its musicianship.