You are here: Home / Playlists / The Gates of Glory and Ockeghem

The superb series from the Eton Choirbook with Christ Church cathedral continues, and excepts from a live concert by Blue Heron.

The men and boys of The Choir of Christ Church Cathedral, Oxford and director Stephen Darlington continue their exploration of the Eton Choirbook, the extraordinarily vast and diverse collection of English sacred music from the early Renaissance, with a fifth volume in their critically acclaimed series. As with previous volumes, The Gate of Glory includes a world premiere recording – Walter Lambe’s Gaude flore virginali – alongside works by Hugo Kellyk, Robert Fayrfax, Robert Hacomplaynt and John Browne, the preëminent composer of the Eton Choirbook. The diversity of styles on this album is particularly striking, ranging from the astonishing balance of harmony and counterpoint in Browne’s O regina mundi, to the elegance and simplicity of Fayrfax’s setting of the Magnificat. This is liturgical music which truly gives the listener a glimpse of the mystery of the eternal.

From AllMusic.com: The Eton Choirbook, compiled over 50 years of the 15th century and jealously preserved during the years of Protestant rule, is a monument of English polyphonic practice. Yet it has, until now, been known more to musicologists than to performers. The vast walls of music characteristic of the 15th century style, largely devoid of points of imitation, give the listener little to hold onto or keep track of. The series of recordings by the Choir of Christ Church Cathedral, Oxford, under director Stephen Darlington, entitled The Gate of Glory and traversing the entire contents of the choirbook, has made the music come alive, and this release, the fifth volume in the series, may be a good place to start for those wanting a sample of or a way into this repertory. The names of the composers, possibly excluding Robert Fayrfax, remain all but unknown, at least outside British choral circles. The program contains five motets, giant in the characteristic way of the period, and in Darlington's hands they're glorious. The most important thing he and his choristers do is to shape a distinctive timbre for each of the vocal lines. There are up to seven in the opening Gaude flore virginali of Hugh Kellyk, but the listener has no trouble picking them out of the texture. You might sample this mighty work, nearly 20 minutes long, to hear especially the cutting, coruscating sound of Darlington's boy trebles, who appear in each piece except for the other Gaude flore virginali, by Walter Lambe. What makes the album a good sampling is that the music covers much of the period encompassed by the choirbook; the later composers simplified the texture a bit and, under the influence of Continental composers, began to experiment with imitation; in the earlier pieces, the structure is delineated mostly by reductions to solos and duets. Avie's sound engineers capture both the scope of the music and the admirable clarity of the singing here. English polyphony of this period is not for everybody, but here it takes a big step forward in intelligibility. 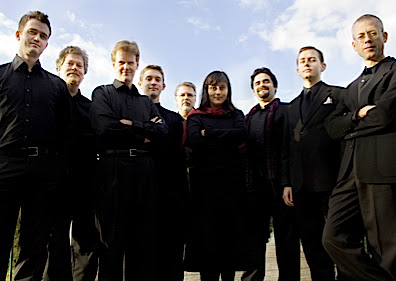 [email protected] is Blue Heron’s multi-year project to perform the complete works of Johannes Ockeghem, one of the very greatest composers of the Western tradition, in thirteen programs over the course of seven seasons. Inaugurated in the spring of 2015, [email protected] will wind up in 2020-21, just in time to commemorate the 600th anniversary of Ockeghem’s birth in circa 1420.

Besides concerts, the project demands and will include a significant component of research into the many questions of fifteenth-century performance practice which remain unsolved puzzles – questions as basic as pitch level, voice types, and scoring. By the end we expect to have a better understanding of such issues. We will also have created a new complete edition of the music of Ockeghem, scrupulously based on the original sources and rigorously tested in practice.

Along the way we will also explore music of Ockeghem’s predecessors, contemporaries, and followers, developing and sharing with our audiences a sense of the entire fifteenth-century repertoire. Succeeding our series of recordings of Music from the Peterhouse Partbooks, the fifth and final volume of which was released in March 2017, a new series of CDs is being planned, including a 2-CD set of all of Ockeghem’s songs.

Joining Blue Heron as adviser for [email protected] is Professor Sean Gallagher of the New England Conservatory, one of the world’s leading experts on Ockeghem and his contemporaries.

From NY Classical Review:
According to those in the know, two qualities in music highly prized during the lifetime of Johannes Ockeghem (c. 1420-1497) were varietas and subtilitas. (Of course, these traits have been admired in all eras, if not necessarily in Latin.)

To appreciate the variety of this great composer’s output, it helps to hear a lot of it at one sitting. And when it comes to subtlety, few vocal groups anywhere can match Boston-based Blue Heron, which gave delectably nuanced performances of music by Ockeghem (and a few contemporaries) Sunday afternoon at Corpus Christi Church in Morningside Heights.

The program identified the group’s eight singers, who performed the various works in sub-groups of two to five in 15th-century terms: soprano Margot Rood and countertenor Martin Near, for example, were the “cantus” or highest voice, while “tenors and countertenors” Owen McIntosh, Jason McStoots, Stefan Reed, and Sumner Thompson filled out the middle parts, supported by the “bassus” of Paul Guttry and David McFerrin.

As the only woman in the group, Rood put a particular flute-like shine on the sound of the pieces she performed in, without disturbing the transparency and balance that also characterized the all-male ensembles.

In all configurations, the singers meshed flawlessly without a conductor. Blue Heron’s director, Scott Metcalfe, performed only once all afternoon, supporting two singers with his Renaissance fiddle in Barbingant’s song “Au travail suis.”

Standing at the front of church’s chancel/choir area, the singers sounded supported but not blurred by the room’s mild resonance. It would have been easy to settle back in one’s pew and just bask in the sound of pure, immaculately tuned voices intertwining in the vibrant air.

But when performing in New York’s most academic neighborhood, learning must be served. So director Metcalfe, in a lengthy program note and spoken comments, endeavored to unravel the program’s “complex of interrelated works”—that is, two mass settings by Ockeghem and the popular songs by him and others on which they were based.

For listeners of the time, the lyrics of a familiar song might have provided a subliminal “gloss” on the text of the Latin mass when they heard the tune. (Think jazz great John Coltrane appropriating a Broadway show tune by Richard Rodgers for his own purposes in “My Favorite Things,” and you’re part way there.)

In the time-honored tradition of finding theological meaning in love poetry—Song of Solomon, Christ as Bridegroom, etc.—a lover’s plea to his unattainable mistress in a song could inform the “miserere nobis” (have mercy on us) of a mass dedicated to the Virgin Mary, such as Ockeghem’s Missa Ma maistresse. 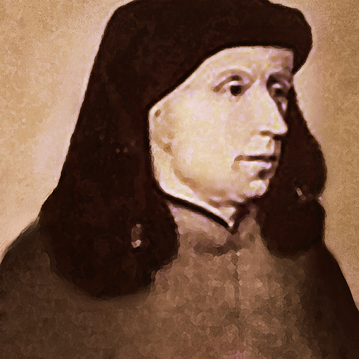 Sunday’s program was hardly the freshman course, since the songs by Ockeghem and the obscure but masterful Barbingant (even the composer’s first name is unknown) were contrapuntally sophisticated in themselves, and then Ockeghem’s masses on them added still more layers of wit and allusion.

Metcalfe was kind enough to begin the program with an item completely unrelated to this tangle of influences, a vibrant performance of the five-part motet “Celsitonantis ave genitrix” by Johannes Regis, which seemed just the right appetizer and ear-opener for an afternoon of early Renaissance counterpoint, Low Country style.

The song “Au travail suis” (I am in agony) eased onto the contrapuntal scene with just two singers and a fiddle, performing the yearning text with intense expression. The “Kyrie” and “Gloria” of Ockeghem’s Missa Au travail suisfollowed, citing the song clearly in the former, but branching out with daring harmonies and great varietas of texture and density in setting the long text of the “Gloria.”

The rest of this mass had to wait till the concert’s second half, as the singers turned next to the U.S. premiere—and possibly the first performance anywhere since the 15th century—of the song “En atendant vostre venue” (While awaiting your arrival), composer anonymous, which was discovered three years ago in a treasure-trove manuscript of hit tunes containing some familiar items but also 12 songs previously unknown to scholars of the period.

Listening to two deep voices curling seductively under the song’s soaring tenor, one felt gratitude and a touch of awe at what Metcalfe described as “the first major rediscovery in the field of fifteenth-century song since before the Second World War.”

The program’s first half closed with Ockeghem’s plainchant-based “Credo sine nomine,” a work that shares a passage or two with the Missa au travail suis, but impressed on Sunday mostly for its marvelous variety of two-, three-, and four-voice textures.

In the program’s second half, the ensemble singing reached still loftier heights of execution, beginning with Firminus Caron’s mellow drinking song “Cent mille ecuz” (A hundred thousand ecus) and its suggestion of hiccups and dancing, continuing with the final three movements of the Missa Au travail suis in styles that ranged from complex polyphony to brick-wall homophony, and culminating in the melancholy phrases of Ockeghem’s song “Ma maistresse,” articulated in exquisitely-timed pauses and soft attacks, the singers seeming to breathe as one.

The program closed with sinewy performances of Kyrie and Gloria, the only extant movements of Ockeghem’s Missa Ma maistresse. During the latter, singers came forward to join the original quartet until eventually all eight members of the group brought the concert to a robust close.