You are here: Home / Playlists / The Late Middle Ages

Florence around 1350, the Piae Cantiones collection, and a view of 15th century German songbooks with the remarkable Corina Marti. 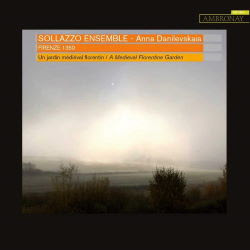 From Music Web International: It was ‘The Calamitous Century’, as Barbara Tuchman called it in her book A Distant Mirror: the Hundred Years’ War, the Peasants’ Revolt, excessive rain in the 1320s and 1340s resulting in a series of famines, the Papal Schism and some religious fanatics, and of course the Great Plague which in 1350 was devastating all Europe. If you know your Boccaccio, you will have read how those who could afford it would take off to the remote countryside in an attempt to avoid the worst. Boccaccio’s young things also take music with them, and their evenings are spent in dancing and singing and telling the famous tales. So it was also an age of great creativity and imagination. Think of Petrarch (d. 1374), think of Giotto, and think also of the Gothic cathedrals in the elaborate ‘decorated’ style of the first half of the century. This, then, is the background to the music on the present disc.

Oddly enough, the opening track, a political motet Godi Firenze by Paolo da Firenze, can be dated precisely at 1406. It is a little misleading to think that the composers represented here were all at their most prolific in 1350. The ‘main man’ is Francesco Landini, most of whose 197 surviving pieces have been recorded on various albums and in various anthologies. It is good then to also discover music by his Italian contemporaries. They all lived at the same time as Guillaume de Machaut and the next generation (for example, Solage), whose shadow does sometimes linger over these Italians, but whose sense of melody and rhythm were mostly quite different.

So who were these other composers? Their careers are, needless to say, haphazardly documented. Don Paolo da Firenze has left us eleven madrigals and the complex polyphony of the Benedicamus domino recorded here. From the pen of Giovanni da Firenze, also known as Giovanni da Cascia, we have twenty-one compositions; Per larghi prati, a caccia, is most recorded. Of the work of Bartolino da Padua (Frater Bartolinus), we have no fewer than forty pieces. Don Vincenzo da Rimini has left us six pieces. Lorenzo da Firenze, whose rare and extraordinary three-voiced caccia A poste messe ends the disc, was undoubtedly the finest; one of an earlier generation of composers, he was survived by seventeen compositions.
Incidentally, the notes refer to Landini as ‘Francesco degli Organi, dit aussi Landini’ because he was famed as a brilliant keyboard player although, amazingly, blind from birth.

I rate the disc as Highly Recommended – something I do not do lightly – because of the quality and beauty of the performances. Let me offer a few examples. Per larghi prati for much of its time captures the mood of a hunt with an exciting two-part canon; when the hunters settle out of the sun into the shade, the music quietens. The group adheres to it very convincingly and sensitively. Landini’s famous Quest fanciull amor is given as the contrafactum Creata fusti o vergine Maria in honour of the Virgin Mary. So, rather than a lively dance number, it is slow and given a most moving, suitably delicate and spiritual air. It is this differing characterisation of some of the songs which I find so clever and so musical.

Vincenzo de Rimini’s Ay schonsolato is offered as an angry lament, with its incredibly convoluted and virtuosic lines. Tenor Vivien Simon is utterly convincing and dramatic. Most of the other texts concern despairing lovers and lost loves. Sadly, no poets are named.

I have not yet mentioned the beauty and sensitivity of the a capella performance of Johannes de Florentia’s melting Quand’amor in which the lower parts vocalise below the top texted part. Then we have Quando la stella by Giovanni where the vocal part is entwined like ivy around the instruments.

Ah, the instruments! Like many European early music ensembles, the performers use them liberally but carefully. If you know the recordings by Malla Punica under Pedro Memelsdorf, you will have a rough idea of the Sollazzo Ensemble’s approach. There is a similarly elastic sense of rhythm and dynamics, and instrumentalists tend to improvise swirling descants and inner parts even around the voices. But the Solazzo Ensemble is never as extreme or radical.

The instruments are fiddle, vielle, lute, organetto (which Giovanni da Firenze and Landini were both famed for playing) and a psaltery. Anna Danielevskaia, the Ensemble’s imaginative director, also plays a fiddle and vielle. They are given three tracks of their own.

The recording was clearly made in a church, with an excellent acoustic. The disc is in a wonderfully slim-line, space-saving card casing. All texts are clearly given and translated. There are photographs and performer biographies, and there is Danielevskaia’s useful essay. (My only disappointment is that the disc weighs in at less than an hour, so one feels a little short-changed by most modern reckonings.) 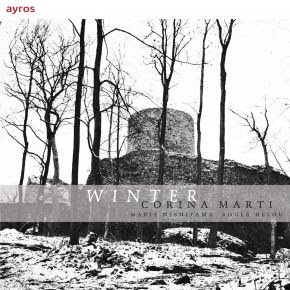 The path that all interested listeners are about to follow leads to the deep and as yet not fully explored woodlands of the instrumental music of the latter half of the fifteenth century in or around southern Germany. It will zig-zag from one repertoire to another, from one manuscript to another, and of course from one ‘soundscape’ to another by presenting different combinations of instruments, in dialogue or simply allowing some of them stand alone to speak for themselves so that at the end of their sonic journey, listeners can fully enjoy a panoramic view of this rich and fascinating tradition.

The major part of the repertoire presented here is culled from three important manuscripts, all copied in the second half of the fifteenth century: the Buxheim organ book (Bux, ca. 1470), the Lochamer song book (Loch, ca. 1460), and the Glogauer partbooks (or Zagan partbooks, to use the title favoured in some recent studies). All three of the books are treasure troves of delightful and unexpected discoveries. Among the composers presented in the French section of this recording are some of the most eminent and wellknown musicians of the fifteenth century: Guillaume Du Fay, Gilles Binchois, Antoine Busnois.

The works are interspersed with Buxheimer’s free instrumental improvisations, redeuntes and preambula. The former consist of a highly ornamented upper voice flowing against a sustained (or repeated) note in the lower, whereas the latter are essentially fantasia-like pieces divided into several parts with contrasting rhythms and textures. Although the rendition here is purely instrumental, words are constantly there at a subliminal level, creating yet another semantic and sonic layer – imperceptible, but always present in the background. 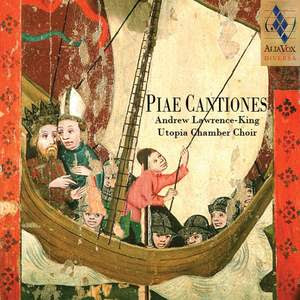 ALIA VOX DIVERSA, the new collection created 4 years ago to host independent productions by outstanding musicians who for many years have featured in concerts and recordings with our ensembles HESPÈRION XXI, LA CAPELLA REIAL DE CATALUNYA and LE CONCERT DES NATIONS, is pleased to release and present this new album Piae Cantiones (Spiritual Songs) by the vocal ensemble UTOPIA CHAMBER CHOIR and an instrumental group conducted by Andrew Lawrence-King. This new programme, conceived, recreated and directed by Andrew Lawrence-King one of the most long-standing and imaginative collaborators in our long career in musical production, brings us the beautiful and ancient spiritual songs celebrating the mystery of the Nativity. The earlier choral versions, which were released in Finland, have enjoyed great success in Nordic and English-speaking countries.

Once again, this extraordinary programme embodies all the qualities envisaged for the Alia Vox Diversa collection: the rediscovery of neglected repertories such as the spiritual music surrounding the celebration of the Nativity from the ancient cultures of Finland and other Nordic lands, recreated and performed with sensitivity and assurance, as well as respect for the traditions and historical practices of the Renaissance and the early Baroque.

Let us listen to this wonderful music, these hauntingly beautiful songs and, thanks to the talent and sensitivity of the singers and instrumentalists of UTOPIA CHAMBER CHOIR under the direction of Andrew Lawrence-King, discover in the vitality and emotion of these musical gems the essence of the spiritual musical culture of the old northern European countries.

Published in Germany in 1582, the collection "Piae Cantiones" (Pious Songs) contained 74 songs and choral pieces in Latin and Swedish, many medieval in date and style, and encompassing both sacred and school songs. (A revised version from 1625 added 13 songs.) While the melodies were largely used at the Finnish cathedral school in Turku and other schools in Finland and Sweden, they proved influential across northern Europe and represented the stirrings of the Protestant hymn tradition, whose influence lasted well into the 19th century. These selections from "Piae Cantiones" offers some of the better known Christmas hymns, such as "Puer natus in Bethlehem," "Resonet in laudibus," "Gaudete," "Personent hodie," and the ever-popular "In dulci jubilo," all used in Roman Catholic worship, though others may be more familiar in Lutheran services, due to the early acceptance in Germany by no less a composer, scholar, and arranger than Michael Praetorius. Andrew Lawrence-King and the Utopia Chamber Choir offer a program that captures the antique qualities of settings while giving the performances rich textures and colorful arrangements. Unlike many early music performances which employ only male voices in small numbers, the Utopia Chamber Choir consists of women and men in a 20-voice ensemble, accompanied by an ad hoc instrumental group of harps, percussion, bells, organ, and even a hurdy-gurdy, so the tracks are quite varied and never dull. This album is a great option for listeners who are seeking a new direction for their holiday music.