You are here: Home / Playlists / The Sacred Side

Music from Shakespeare’s time featuring the Choir of Clare College, Cambridge, the ensemble Ora, and The Sixteen.

NOTE: All of the music on this program features music from Shakespeare’s time, with the Choir of Clare College, Cambridge, the ensemble Ora, and The Sixteen.

The Choir of Clare College, Cambridge, and its director, Graham Ross, have released a series of recorded compilations of liturgical music keyed to particular holidays in the Christian calendar, and the latest installment — a timely Easter offering — continues the tradition in lustrous form. The repertoire here is drawn from several centuries’ worth of Easter music, from Gregorian chant through Renaissance polyphony up through world premieres. And if you expect the result to sound unfocused or scattershot, think again — putting together music that is thematically linked but stylistically disparate actually pays off beautifully. There are apt hymns from the 17th and 20th centuries (Samuel Scheidt and Ralph Vaughan Williams) back to back; the Victorians weigh in with appropriate anthems; and the resplendent writing of the Renaissance master Orlando di Lasso frames the entire program handsomely. The choral singing is formidable throughout, with a combination of full-bodied, translucent textures and eloquent phrasing. — Joshua Kosman

Founded in 2014, ORA was born out of a belief that we are in a second golden age of choral music, matching that of the Renaissance. With this in mind, the choir’s performances and recordings showcase classic masterpieces of Renaissance choral music alongside reflections from contemporary composers. The musicians of ORA bring with them a wealth of choral experience that we hope shows these pieces, both new and old, as the stunning works of art that they truly are. Commissioning new choral works and championing contemporary composers is very important to ORA, and the group has a firm commitment to regular commissioning from a wide selection of composers. This ranges from more established and prominent names to lesser-known but equally exciting discoveries. ORA, in conjunction with its affiliate patron’s group ORA100, has a clear programme in place for creating a substantial portfolio of contemporary commissions. ORA looks forward to recording and performing all of these works but also hopes that they will provide other vocal groups with a wealth of repertoire for generations to come.

Suzi Digby:
“If the Renaissance can justifiably lay claim to being a golden age for choral music I have long believed that we are currently in a new glittering age of both choral writing and performing. Throughout the world choral standards are ever on the increase and twenty-first-century composers are responding to this by writing exciting and challenging material for choirs, both amateur and professional. Having spent much of my working life in education I have seen this transition from both near and far, and when the opportunity came to form ORA, alongside my management team, I felt it was too good an opportunity to miss to work with some of the UK’s finest consort singers, whilst also contributing to the continuing legacy of choral music. I wanted to set a challenge to the composers we approached to respond to some of the great masterworks from Renaissance times, and to find out how they would individually reflect on these pieces. For this recording we chose to focus on that towering figure of the English music scene, William Byrd. Starting the recording with an original Renaissance reflection, Byrd’s pairing of his own music to Da Monte’s setting of verses from Psalm 137 – one of the most remarkable exchanges in musical history – we centre on his peerless Mass for Five Voices. We asked Roxanna Panufnik, Francis Pott, Alexander L’Estrange, Owain Park and Charlotte Bray to set their own reactions to the individual movements and we are delighted with the varied responses we got – showing the universality of Byrd’s sacred music and its relevance to today’s musicians. We imposed no restrictions, other than length, on our chosen composers in order to gain their truest reactions. The recording closes with possibly Byrd’s most famous work, his setting of the text of Ave Verum Corpus, and we asked the multi-talented musician Roderick Williams to write a setting on the same text. I am so grateful to him, and to all the composers of these wonderful new works, and hope you will be equally entertained and enlightened.” 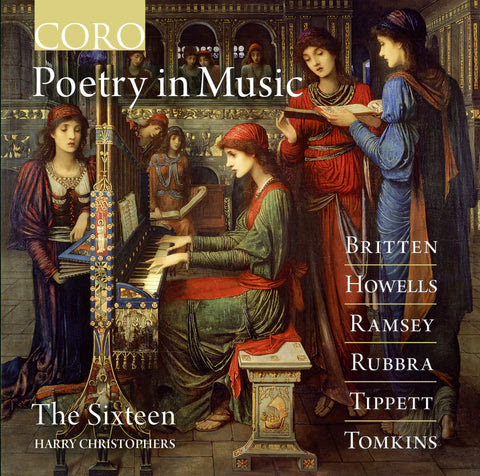 Does music add substance to words or is music inspired by them? Songs of departure and farewell are deeply rooted in the great tradition of British choral music, nourished by ancient myths of testing journeys, wayside transformations and homecomings. The transcendent nature of music and the power of poetry to challenge and alter perceptions of reality – harnessed by English composers over many centuries – flow through a programme that invites contemplation of life and death, of love and loss, creation and eternity. In a journey covering six centuries of musical history, The Sixteen performs a cappella anthems with powerful texts by writers as varied as Edmund Spenser, Christopher Fry and W.H. Auden.

'Four tracks and less than 20 minutes into this disc it is clear that this is something really special.' Gramophone
'The performances are beautiful and brilliant.' The New York Times