NOTE: All of the music on this program is from the recording “Missa Maria Zart” featuring the Tallis Scholars directed by our guest, Peter Phillips. The recording is on the Gimell label, and is CDGIM 032.

Preservation of this program is made possible by a generous grant in honor of Hazel Roberts. 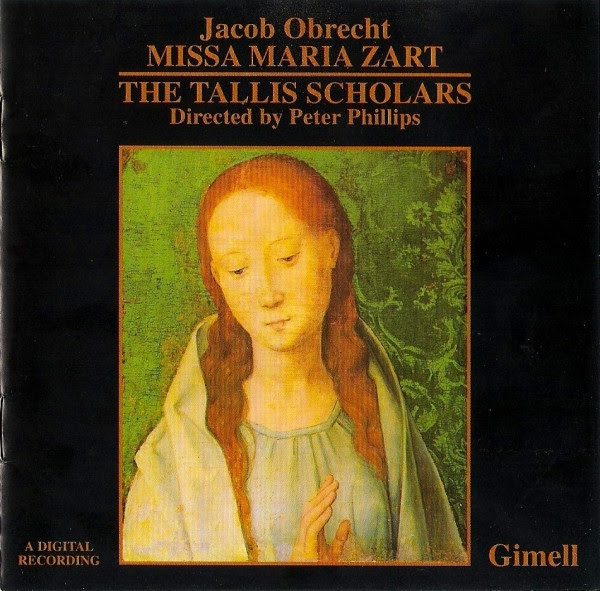 Obrecht's Missa Maria zart (Mass for Gentle Mary) is a masterpiece of sustained and largely abstract musical thought and possibly the longest polyphonic setting of the Mass Ordinary ever written.

To describe Obrecht’s Missa Maria zart (‘Mass for gentle Mary’) as a ‘great work’ is true in two respects. It is a masterpiece of sustained and largely abstract musical thought; and it is possibly the longest polyphonic setting of the Mass Ordinary ever written, over twice the length of the more standard examples by Palestrina and Josquin. How it was possible for Obrecht to conceive something so completely outside the normal experience of his time is one of the most fascinating riddles in Renaissance music.

Jacob Obrecht (1457/8–1505) was born in Ghent and died in Ferrara. If the place of death suggests that he was yet another Franco-Flemish composer who received his training in the Low Countries and made his living in Italy, this is inaccurate. For although Obrecht was probably the most admired living composer alongside Josquin des Prés, he consistently failed to find employment in the Italian Renaissance courts. The reason for this may have been that he could not sing well enough: musicians at that time were primarily required to perform, to which composing took second place. Instead he was engaged by churches in his native land – in Utrecht, Bergen op Zoom, Cambrai, Bruges and Antwerp – before he finally decided in 1504 to take the risk and go to the d’Este court in Ferrara. Within a few months of arriving there he had contracted the plague. He died as the leading representative of Northern polyphonic style, an idiom which his Missa Maria zart explores to the full.

This Mass has inevitably attracted a fair amount of attention. The most recent writer on the subject is Rob Wegman (Born for the Muses: The Life and Masses of Jacob Obrecht by Rob C Wegman (Oxford 1994) pp.322–330. Wegman, Op.cit., p.284, is referring to H Besseler’s article ‘Von Dufay bis Josquin, ein Literaturbericht’, Zeitschrift für Musikwissenschaft, 11 (1928/9), p.18): ‘Maria zart is the sphinx among Obrecht’s Masses. It is vast. Even the sections in reduced scoring … are unusually extended. Two successive duos in the Gloria comprise over 100 bars, two successive trios in the Credo close to 120; the Benedictus alone stretches over more than 100 bars’; ‘Maria zart has to be experienced as the whole, one-hour-long sound event that it is, and it will no doubt evoke different responses in each listener … one might say that the composer retreated into a sound world all his own’; ‘Maria zart is perhaps the only Mass that truly conforms to Besseler’s description of Obrecht as the outsider genius of the Josquin period.’

The special sound world of Maria zart was not in fact created by anything unusual in its choice of voices. Many four-part Masses of the later fifteenth century were written for a similar grouping: low soprano, as here, or high alto as the top part; two roughly equal tenor lines, one of them normally carrying the chant when it is quoted in long notes; and bass. The unusual element is to a certain extent the range of the voices – they are all required to sing at extremes of their registers and to make very wide leaps – but more importantly the actual detail of the writing: the protracted sequences against the long chant notes, the instrumental-like repetitions and imitations.

It is this detail which explains the sheer length of this Mass. At thirty-two bars the melody of Maria zart is already quite long as a paraphrase model (the Western Wind melody, for example, is twenty-two bars long) and it duly becomes longer when it is stated in very protracted note-lengths. This happens repeatedly in all the movements, the most substantial augmentation being times twelve (for example, ‘Benedicimus te’ and ‘suscipe deprecationem nostram’ in the Gloria; ‘visibilium’ and ‘Et ascendit’ in the Credo). But what ultimately makes the setting so extremely elaborate is Obrecht’s technique of tirelessly playing with the many short phrases of this melody, quoting snippets of it in different voices against each other, constantly varying the extent of the augmentation even within a single statement, taking motifs from it which can then be turned into other melodies and sequences, stating the phrases in antiphony between different voices. By making a kaleidoscope of the melody in these ways he literally saturated all the voice-parts in all the sections with references to it. To identify them all would be a near impossible task. The only time that Maria zart is quoted in full from beginning to end without interruption, fittingly, is at the conclusion of the Mass, in the soprano part of the third Agnus Dei (though even here Obrecht several times introduced unscheduled octave leaps).

At the same time as constantly quoting from the Maria zart melody Obrecht developed some idiosyncratic ways of adorning it. Perhaps the first thing to strike the ear is that the texture of the music is remarkably homogeneous. There are none of the quick bursts of vocal virtuosity one may find in Ockeghem, or the equally quick bursts of triple-time metre in duple beloved of Dufay and others. The calmer, more consistent world of Josquin is suggested (though it is worth remembering that Josquin may well have learnt this technique in the first place from Obrecht). This sound is partly achieved by use of motifs, often derived from the tune, which keep the rhythmic stability of the original but go on to acquire a life of their own. Most famously these motifs become sequences – an Obrecht special – some of them with a dazzling number of repetitions (nine at ‘miserere’ in the middle of Agnus Dei I; six of the much more substantial phrase at ‘qui ex Patre’ in the Credo; nine in the soprano part alone at ‘Benedicimus te’ in the Gloria. This number is greatly increased by imitation in the other non-chant parts). Perhaps this method is at its most beautiful at the beginning of the Sanctus. In addition the motifs are used in imitation between the voices, sometimes so presented that the singers have to describe leaps of anything up to a twelfth to take their place in the scheme (as in the passage beginning ‘Benedicimus te’ in the Gloria mentioned above). It is the impression which Obrecht gives of having had an inexhaustible supply of these motifs and melodic ideas, free or derived, that gives this piece so much of its vitality. The mesmerizing effect of these musical snippets unceasingly passing back and forth around the long notes of the central melody is at the heart of the particular sound world of this great work.

When Obrecht wrote his Missa Maria zart is not certain. Wegman concludes that it is a late work – possibly his last surviving Mass setting – on the suggestion that Obrecht was in Innsbruck, on his way to Italy, at about the time that some other settings of the Maria zart melody are known to have been written. These, by Ludwig Senfl and others, appeared between 1500 and 1504–6; the melody itself, a devotional monophonic song, was probably written in the Tyrol in the late fifteenth century. The idea that this Mass, stylistically at odds with much of Obrecht’s other known late works and anyway set apart from all his other compositions, was something of a swansong is particularly appealing. We shall never know exactly what Obrecht was hoping to prove in it, but by going to the extremes he did he set his contemporaries a challenge in a certain kind of technique which they proved unable or unwilling to rival.