Advent from King’s College, London, carols from the Gesualdo Six, and Christmas at St. George’s Windsor. 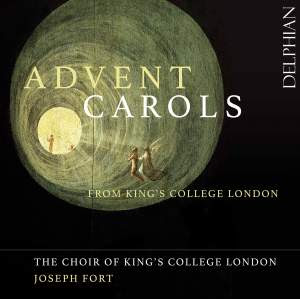 Every December, over a thousand people attend the Advent carol service in the Chapel of King’s College London, which is repeated over three nights to meet demand.

This album offers a snapshot of one such service, with its characteristic mix of plainchant, seasonal hymns and polyphony old and new. The Great O Antiphons (sung according to medieval Sarum practice) provide the backbone, pointing inexorably towards the Christmas birth.

A brace of premiere recordings centres on composers with personal connections to King’s College, and is complemented by current Professor of Composition George Benjamin’s rarely heard setting of a prophetic text after Isaiah. It intensifies the mood of heightened expectation proper to this very special season, and reminds us that something truly extraordinary is about to happen. 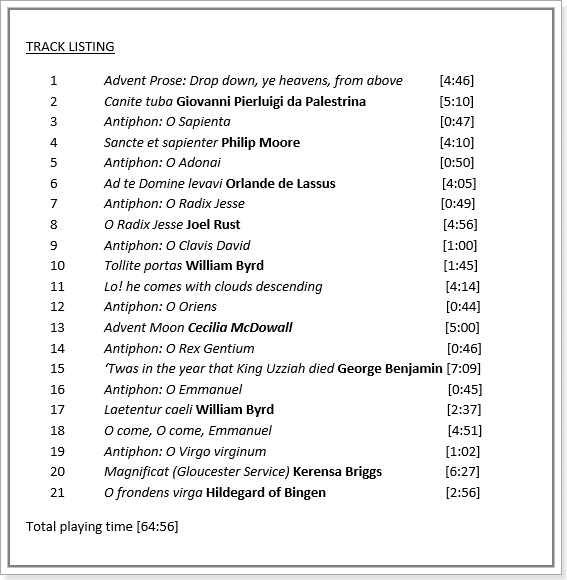 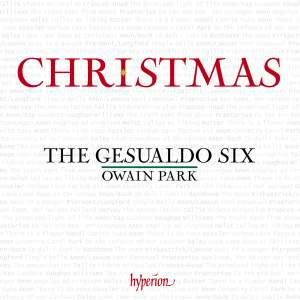 The Gesualdo Six is a vocal consort comprised of some of the UK’s ﬁnest young consort singers, directed by Owain Park. Formed in March 2014 for a performance of Gesualdo’s Tenebrae Responsories for Maundy Thursday in the chapel of Trinity College, Cambridge, the group went on to give over one hundred performances around the United Kingdom and abroad in its ﬁrst four years. During this time, The Gesualdo Six further strengthened a passion for ensemble singing that for many of them stemmed from formative years as choristers in churches and cathedrals around the country.

The Gesualdo Six regularly performs at festivals around Europe, with debuts in the USA and Australia planned for upcoming seasons. The ensemble often incorporates educational work into its activities, holding workshops for choirs and composers and giving concerts alongside local performers.

Whilst initially focusing on early music, concert programmes began to reﬂect a desire to include more modern repertoire and now works from the Renaissance are interwoven with contemporary pieces by composers including György Ligeti and Joanna Marsh. The Gesualdo Six has curated two Composition Competitions, with the 2019 edition attracting entries from over three hundred composers around the world. From Music Web International: Christmas is often called the season of goodwill, so it would be churlish to castigate Hyperion for their blatant bit of mis-packaging. Suffice it to say that this recording is neither devoted to Christmas music nor does it come from St George’s, Windsor. The music is drawn equally from three adjacent seasons of the church’s year – Advent, Christmas and Epiphany – and, probably because of its proximity to Heathrow Airport, the recording was not made anywhere near Windsor Castle, but in two un-connected churches; the accompanied items in Northampton and the unaccompanied ones in Gospel Oak. But it’s not just the wish to avoid ill-feeling at this time of year which prompts me to let this misrepresentation pass; it’s the fact that this is, at any time of the year and in any place, a really lovely recording of some exquisite singing.

Perhaps because they are away from their home ground, James Vivian and his St George’s Chapel choir do not always get it quite right. Philip Ledger’s arrangements of The Sussex Carol and I Saw Three Ships dash along rather faster than is good for them, and while the choir’s diction is never anything but flawless and their precision of articulation magnificent, at these speeds they cannot really bed down into a solid enough tone to make it sound anything other than rushed. Possibly this tendency to hurry saves Alun Hoddinott’s rather heavy-handed Saviour of the World, and while I still have no idea why Mykola Leontovych’s irritatingly insistent Carol of the Bells ever gets performed at all, let alone as frequently as it is, at least this express-train version gets it over and done quickly.

With room and space to relish the music they sing, the St George’s Chapel Choir comes up with some simply enchanting performances. John Gardner’s marvellous Tomorrow Shall Be My Dancing Day comes off magnificently at Vivian’s decidedly stately tempo, while Luke Bond gets it absolutely right in the extraordinarily complex organ accompaniment of David Briggs’ other-worldly (if French-infused) arrangement of Away in a Manger. There is one true star track, in the guise of Adolphe Adams’ Cantique de Noël. Tenor Nicholas Madden delivers this with such an unfussed, natural and deliciously fluent voice, oozing musical artistry and wafting the scents of France through an impeccable delivery of the text, and with Bond a model of accompanimental sensitivity, that this has to be my favourite Christmas Track of the year.

Each of the three ecclesiastical seasons is represented by a varied collection of musical items, each beginning with a plainchant antiphon beautifully enunciated by the gentlemen of the choir. A setting based on the opening antiphon by Byrd follows, again delivered by the men with sumptuous stylishness, and then comes a collection of traditional carols in modern arrangements interspersed with original new pieces. Advent also brings us an added extra in the shape of a top-notch account of Gibbon’s classic anthem, This is the Record of John while Epiphany has two gorgeously sung gems in Reginald Jacques’ Gallery Carol and Peter Warlock’s hauntingly beautiful Bethlehem Down.

It may not be quite what it says on the box, but its charms are none the less for that and as seasonal music goes, this new release from Hyperion is almost 70 minutes of pure magic.