You are here: Home / Playlists / Three from the Early German Baroque

The Danish Baroque theologian and poet Thomas Kingo (1634-1703) created his groundbreaking hymnals ‘Aandelige Siunge-Koor ’ to encourage the religious faith of his countrymen through domestic devotions in their native language. Today, Kingo’s hymns with their rich Baroque imagery are still at the heart of Danish communal church singing. On this release, however, Phemius Consort presents a selection of the most beautiful Kingo hymns as they were originally intended: as songs with accompaniment, here supplemented by instrumental music by closely related European composers of the period.

Thomas Kingo  by Erik Norman Svendsen
Thomas Hansen Kingo (1634-1703) is one of Denmark’s greatest hymnodists, and his hymns are still sung to this day. 234 of them have been preserved for posterity, 82 of them in the standard hymnal Den Danske Salmebog (2002) and 10 in the Folk High School collectionHøjskolesang­bogen (2009). In the Faroe Islands, in Norway and in Sweden hymns by Kingo are also included in the national hymnals.

He was born in the old northern Zealand borough of Slangerup, where his father, Hans Thomesen Kingo, a second-generation immigrant from Scotland, had married a Danish girl and made a living as a weaver. As a pupil at the Slangerup grammar school Thomas earned a little by singing at weddings and funerals, and on Sundays he accompanied his parents to divine service in the large, stately borough church. From his earliest childhood he had thus been familiar with the liturgy and hymnody of the church.

At the age of 15 he left Slangerup and was admitted to the Frederiksborg Grammar School in Hillerød, which had a reputation as one of the country’s best schools, and which over and above the usual grammar school subjects taught singing and music. This was to be of crucial importance to the thoroughly musical Kingo, as evidenced by among other things the choice of melodies for the hymns in his two sets of ‘Sjungekor’ (Spiritual Chorus).

After taking his school leaving exam in 1654 Kingo wanted to begin studying theology at Copenhagen University, but in that very year the plague ravaged the city, and the University was closed for a year. When it re-opened in 1655 a quarter of the city’s population of 30,000 was dead. Kingo was admitted as a student at the University hall of residence Regensen and finished his studies in 1658, the same year as the Treaty of Roskilde, with the subsequent ceding of Scania, Halland and Blekinge to Sweden. The following year Copenhagen was besieged and unsuc­cessfully stormed.

This was an extremely unsettled and dangerous period in the history of Denmark. The recurring wars with the arch-enemy Sweden in the seventeenth century left Denmark amputated and impoverished. The territories west of the Øresund had been lost, and many parishes were almost deserted. In reality the Swedes held sway in large parts of the kingdom, where they ravaged and plundered on the large scale. National despondency and moral decline left their depressing marks on everyday life.

Absolutism
To counteract the mood of defeat, an Assembly of the Estates was called in Copenhagen; the old nobility was deposed from power and Royal Absolutism was introduced instead. Both the kingdom and the Danish national church were re-established, and a new rise in the fortunes of the nation began. Like other ambitious sons of the citizenry, Kingo welcomed the new ­Absolutism and wrote up to 50 poems to the monarchy in subsequent years, including the magnificent Hosianna for the anointing of Christian V in 1671, as well as a number of poems of homage to the leading men of the age.

At the age of 25 Kingo was engaged as a tutor, first by the steward of Frederiksborg Castle in northern Zealand and then by Lene Rud, Mistress of Vedby­gård in western Zealand. From a number of poems of his youth we know that the unmarried Kingo toured from manor to manor arousing the admiration of the ladies in particular. But he almost lost his life one day when he fell foul of a Swedish dragoon who tried to make off with one of Vedbygård’s horses. The Swede was chased off by the rapier-armed Kingo, but later returned and shot Kingo from the back. The shot went trough his cheek and caused him only cosmetic injuries.

In 1661 Kingo became the personal curate of the rural dean Peder Jakobsen Worm at Kirke-Helsinge in western Zealand. He fell head over heels in love with the dean’s second wife, the Norwegian-born minister’s daughter Sille Balchenborg, and for her he wrote the graceful love song Chrysillis du, mit verdens guld (“Chrysillis, thou, gold of my world”). When Peder Jakobsen Worm died in 1668, Sille was free to marry Kingo, and they were wed the next year in Slangerup Church, where Kingo had just been granted the coveted post of incumbent. However “the course of bliss” was of short duration, as Sille died less than a year after the wedding.

Aandelige Siunge-Koor
It was as the pastor at Slangerup that Kingo, just under 40 years old in 1674, pub­lished his first collection of “hymns and songs for daily devotions” with the title Aandelige Siunge-Koors Første Part (Part one of the Spiritual Chorus) with seven morning and seven evening hymns, as well as seven hymns of penance, a total of 21 texts with related contemporary song melodies – a melodious renewal of the dome­stic devotions that Martin Luther had enjoined heads of families to preside over each day in his Small Catechism – in fact a poetic-theological masterpiece which was both to demonstrate the applicability of the Danish language at a time when the elite spoke German or French and would at the same time awaken a living, active faith in the name of Jesus. This was a matter of doing personal penance and self-improvement which would have consequences for life in terms of one’s calling and rank. A number of days of penance and prayer were introduced over the years. In 1686, however, the minister of state Griffenfeld lumped them into one “General Day of Penance and Prayer”, which is still a Danish Christian holiday.

In 1677 Kingo was promoted by King Christian V to Bishop of the Funen Diocese – a new and busy time with many administrative duties and pastoral visita­tions. But the writing of hymns did not cease. In 1681 he published Aandelige Siunge-Koors Anden Part (Part Two of the Spiritual Chorus) with 20 songs and 13 meditative “sighs of the heart” for “the awakening of the soul to all manner of devotion in all manner of cases”. This time they were not for the everyday domestic devotions within the family circle, but for personal devotions as preparation for Confession and Communion, for mealtimes or journeys, but first and last for a holy life. Kingo himself was now at the peak of his career, and shortly before the publica­tion he was elevated to the nobility, and the next year was rewarded with a doctorate in theology.

The Church Hymnal
On 27 March 1683 Kingo was given the task by Christian V of drawing up and publishing a new official church hymnal, common to the kingdoms of Denmark and Norway. The hymnal was to be arranged according to the ecclesiastical year and was to contain “the usual and best church songs and hymns”, including Luther’s hymns, but also new hymns with texts for the ecclesiastical year by Kingo, who was himself to be responsible for the editing, printing and sale of the work. After six years, in 1689, Kingo published half a church hymnal called ‘The Winter Part’ because its hymns are for the part of the church year that runs from Advent up to and including Easter. Of the 267 hymns in the hymnal, no fewer than 136 had been newly written by Kingo, including his ‘Passion Hymns’. The book was introduced in all churches, but after just a couple of months it was withdrawn by Christian V. The reason appears to have been a court intrigue staged by Kingo’s opponents, who were dissatisfied with his poetic modernism and dominant position. A ‘summer part’ of the hymnal was therefore out of the question.

In 1696, at the urging of Kingo, Christian V set up a commission of 11 lead­ing ecclesiastics with a view to drawing up a new church hymnal with special consideration for “the hymnal that our beloved Doctor Thomas Kingo has pub­lished” (the “Winter Part”, 1689). The publication was half a victory for Kingo, who wrote 86 of the book’s 297 hymns, 55 of these from the Winter Part. “The Pre­scribed New Church Hymnal” appeared in 1699 from Kingo’s printing press in the Bishop’s palace, and since then has simply been called Kingos Salmebog (Kingo’s Hymnal) in popular parlance. 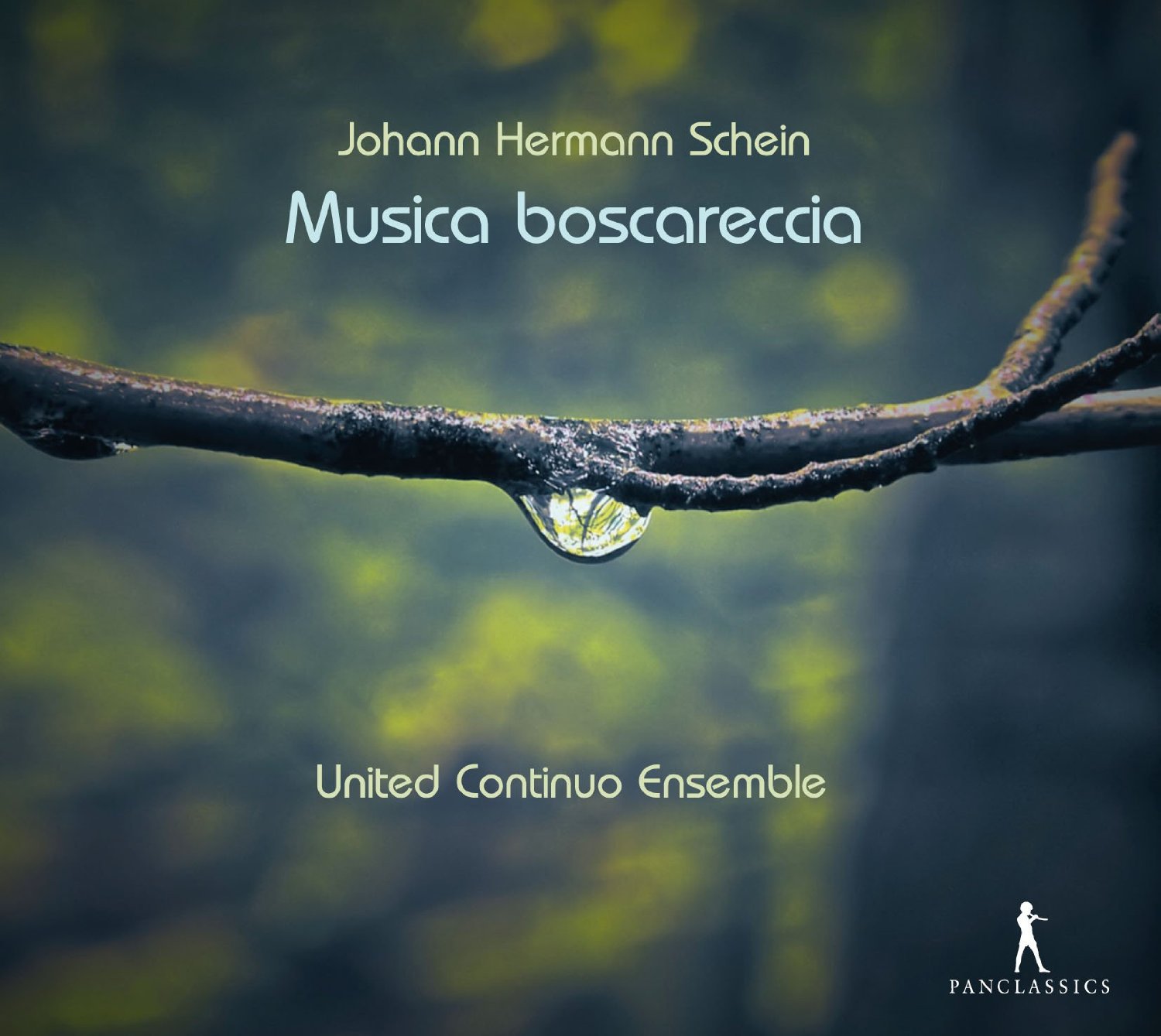 The villanella was originally a plain, three-part folk song from rural Italy, intentionally simple and usually with coarse texts. By the time Johann Hermann Schein published his 50 villanellas of the "Musica boscareccia" in the 1620s, the genre had evolved into an 'art' form. These 'little forest songs' enjoyed immense popularity and their three volumes were reprinted no fewer than eight times by 1651.
Schein's great success is due to the Italian novelty of chordal accompaniment of songs by lutes and keyboard instruments which made these pieces particularly modern and popular.
Their texts, by Schein himself, are full of strongly expressive imagery, charm and wit. An entire host of forest spirits, mythological figures and gods whirl and tumble here. Cupid plays his practical jokes, the beautiful Filli – the undisputed leading lady – hunts the shepherd Coridon through a sea of the joys and suffering of love, bringing even Cupid into terrible difficulties, whilst Concordia watches over all these events with wisdom and composure… 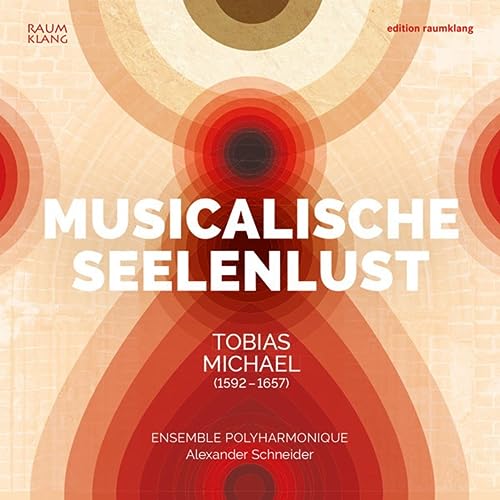 After the death of J. H. Schein in Leipzig, Tobias Michael applied for the position of Thomaskantor in 1630 and apparently had such an outstanding musical reputation that he was elected unanimously by the town council. During his tenure, the choral music blossomed, and the Dresden court composer Heinrich Schütz was so enthralled by the “famous choir” that he dedicated his Geistliche Chormusik to the choir of St. Thomas’s.
Practically only one work by Tobias Michael has been preserved, the Musicalische Seelenlust, which countered the horrors of the Thirty Years’ War with sumptuous harmonies. Elaborate sacred madrigals alternate with small-scale, virtuosically embellished sacred concertos. In his work, Tobias Michael succeeds in combining text and harmony into a Baroque tonal language of great expressivity, which is to be heard for the first time on this inspired recording by the Ensemble Polyharmonique.