You are here: Home / Playlists / Three More from the Middle Ages

Moralizing songs of the Middle Ages, songs from the Crusades, and the concept of transformation in the 14th century.

From MusicWeb: The crusaders' dilemma is clearly exemplified in the song Seigneur, saichies by Thibaut de Champagne. "He who does not leave at once for the land where Christ loved and died, and takes the cross … will hardly go to paradise" and yet in the words of another song by Thibaut "God, why did you create foreign countries? It has parted many lovers who have lost comfort of love and forgotten its joy." There was, though, a joy greater than this: "It is good to be God's servant, and not to be touched by danger or chance; Serve well and be rewarded well." (Conon de Bethune). It is still, even at a distance of 800 years very touching to read these words and to hear these songs; they retain a strong quality, which, in these performances, is captured very well.

The composers can be traced through various sources. Conon de Bethune (c.1150-1224) is mentioned by Villehardouin in his account of the 4th Crusade c.1202. He was a politician, statesman and soldier who left nine poems with music of which these are his two 'chansons de Croisade'. Le Chatelain de Couci (born c.1168) who left 15 songs was on the same crusade and died there in 1203. It is touching to read in his song 'A vous amant' the lines "I do not know, my lady, if you will see my return. Perchance I shall never see you again." Thibaut IV, Count of Champagne (1201-1253) led a crusade in 1239, which ended disastrously. His father before him had been a crusader. Hugues de Berge (c.1170-c.1228) left on the same crusade and lived afterwards in Constantinople. Huon de Saint-Quentin can be found on the 5th Crusade of 1219, lamenting the failure of the knights to win Jerusalem back for God. The CD booklet points out which songs belong to which crusade. Perhaps at the time there was a stylistic difference between them but that is now impossible to discern.

Each song is monophonic in the manuscript, no rhythm is indicated and, of course, no instrumental parts. In the case of a song by Thibaut, King of Navarre its source is beautifully copied with an illustration depicting a fiddler seated before the King and Queen, reminding us that 'trouvere' songs were to be performed for kings and queens and princes of the earth' (Johannes de Grocheio). String instruments were the only ones not too crude for such an important performance. Oliphant uses shawms, bagpipes, flutes, bell drums, symphonia, dulcimer, fiddle and various percussion. If this worries you then I would add that they are used carefully, sometimes as introductions to, or between, verses of the songs and also in the four instrumental-only performances. Soprano, Uli Korhonen, who has a light and flexible voice, which can rise to a ringing passion when appropriate, is often accompanied by the string instruments only. Even so there is little evidence to show that instrumental participation was used in this way (see Christopher Page 'Voices and Instruments of the Middle Ages' Dent, 1987). Sequentia in their double CD 'Trouveres' (Deutsche Harmonia Mundi RD 77155) use only string accompaniments throughout.

In the middle of the CD is the plainsong melody Vexilla Regis "the mystery of the cross shines forth", reminding us that, as a result of the 7th crusade of 1248 when the French were "utterly overthrown" according to Roger of Wendover, King Louis IX brought to Paris a piece of the true cross. This is beautifully sung, unaccompanied. In fact my heart sank when the first track started as the opening sound is of a bagpipe winding up into its first drone. That is followed by some particularly powerful horse-bells, no doubt suitable for the opening song 'Chevalier, mult estes guariz'. The knights ride into battle "he who rides with Louis need not have fear of hell."

These songs are, by their very nature, masculine, indeed I may say 'macho', and to have a soprano singing them is not entirely successful. It is a pity that Oliphant did not have a male voice for some of the songs at least, and especially for the opening one. From that point of view David Munrow's 'Songs of the Crusades' recorded by Argo in 1971 still remains a useful benchmark with Nigel Rogers and Geoffrey Shaw in fine form.  —Gary Higginson 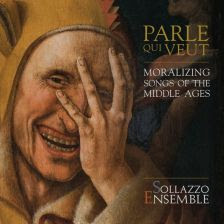 From Gramophone: This has to be one of the most exciting and engaging releases of medieval song in recent years. The Sollazzo Ensemble offer a programme of French and Italian works drawing chiefly on Trecento composers from around Florence and their French counterparts. The moralising theme allows for a great deal of variety from both known and anonymous composers to form a coherent and varied programme. This album forms part of the ensemble’s prize as winners of the 2015 York Early Music Artists Competition and is recorded with a warm clarity by Linn Records in the National Centre for Early Music.

The Sollazzo Ensemble are formed of three voices, two vielles and a harp. Their sound is generally bright, deft and energetic with a very clear focus on text. The singers use a variety of techniques to engage and communicate, from beautiful clear phrasing to crisp, expressive consonants, which at times allows them to tread a deliciously thin line between soft singing and electrifying stage whispers. Every performance on this disc is illuminating, considered and committed. Take for instance the madrigal by Giovanni da Firenze (fl1340‑50): Angnel son bianchofrom the Panciatichi Codex, a moralising tale told from the point of view of a sacrificial lamb. The bright, shimmering sopranos Yukie Sato and Perrine Devillers sing in delicate unison as the voice of this lamb, relishing the onomatopoeic bleating in the text until the actual sacrifice is mentioned, leaving just one soprano to finish the madrigal with poignant stillness.

More than once, this album has confronted me with old favourites performed in new ways. Solage’s (fl late 14th century) harmonically slithery, menacing ballade Le basile I had much admired in the rich, smooth vocalised performance by Gothic Voices on their then groundbreaking album ‘The Study of Love’ (Hyperion, 6/93), but here, Vivien Simon’s gloriously clear tenor voice is absolutely bewitching. 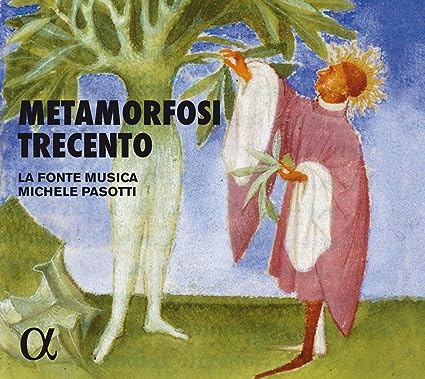 Myth, Sallust tells us, is the relation of ‘things that never happened, but always are’. Ever since the fourteenth century, music has drunk deep from the source of myths. When composers were not dealing with sacred history, with the great morality tales of Christ, they turned to myth as to a great art and a matchless repertory of exemplary stories.

Metamorfosi Trecento is a musical exploration of myths and of the polyphony of the late Middle Ages. The ancient myths, foremost among them Ovid’s Metamorphoses, and their medieval
transpositions are extremely present in the repertory of the Ars Nova: Narcissus lost on a fatal voyage, the stories of Daphne’s dream, Philomela, the myth of Orpheus, Callisto . . .

The lutenist Michele Pasotti and the singers and instrumentalists (fiddle, recorder, clavicymbalum, Gothic harp etc.) of the ensemble he founded in 2005, La Fonte Musica, bring these wondrous tales back to life with a beauty and artistry we wished to share with you.