The beautiful compositions of Waclaw z Szamotuly, Polish lute music, and celebratory works for the Union of Lublin treaty of 1569. SUB URSAE can be translated as under the northern sky. This expression comes from a popular sixteenth-century prayer for the Commonwealth and the king, with a melody by Waclaw of Szamotuly (ca. 1520/25ca. 1560), the most known Polish Renaissance composer and the first to be published abroad alongside works by the most acclaimed contemporary European composers. The anthem, calling upon Christ to protect the subjects of Sigismund Augustus, could have been sung in times of war and peace by both Catholics and Protestants, by Poles and Lithuanians, joined in the common praise of the splendour of the happy and prosperous land under the sky of the Great Bear (Ursa Major). The Cracow Singers directed by Basle specialist Agnieszka Budzin´ska-Bennett and accompanied by Marc Lewon (lute), present the first ever complete songs of the Renaissance master: Latin motets, Polish monophonic and polyphonic hymns as well as the premiere reconstruction of recently discovered fragments Waclaws Lamentationes, long thought to be lost.

This album of Cracow Singers has been nominated for the prestigious International Classical Music Awards 2020.

For the ICMA 2020 awards, the Jury nominated 390 audio and video productions from 130 labels (such as Alpha, Deutsche Grammophon, Naxos, Harmonia Mundi or BIS)

The album is also unique in that it contains the premiere recording of the longest composition of Wacław of Szamotuły – Lamentationes found and reconstructed. The world premiere of Lamentationes took place during two concerts as part of this year’s 15th Misteria Paschalia Festival in Kraków and in Szamotuły in April 2018. 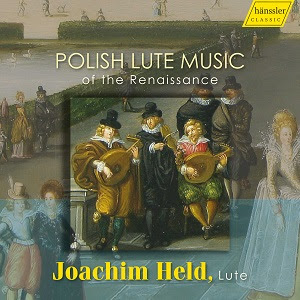 Born 1963 in Hamburg, received his musical education at the Schola Cantorum Basiliensis with Eugen Dombois and Hopkinson Smith. In 1988 he completed his studies with the "Diploma for Early Music". From 1988 - 1990 he studied with Jürgen Hübscher at the Musikhochschule Karlsruhe and graduated with the "Artistic Final Examination". In 1990 Joachim Held won the 2nd prize at the "Concours Musica Antiqua" of the Flanders Festival in Bruges. Since then an intensive international concert activity as soloist, chamber musician and continuo player began.
Since 2005 Joachim Held has regularly recorded solo CDs for Hänssler Classic. In 2005 a selection of the "Schele Manuskripts" from 1619 was published in collaboration with Radio DRS Zurich and a CD with works by Austrian Baroque composers for Baroque lute "Erfreuliche Lautenlust". For this CD Joachim Held received the "Echo Klassik 2006" for the best solo recording in the category 17th/18th century.
This CD Polish Lute Music HC19034 contains tracks from composers as Albert Dlugoraj (1558-1618), Diomedes Cato (1565 – 1628) and other compers of the 16th century.
From Early Music Review: For this excellent CD of Polish renaissance lute music Joachim Held plays seven pieces by Albert Dlugoraj (1558-after 1618), eight by Diomedes Cato (1565-1628), nine by Jakub Polak (c.1545-1605), and seven anonymous pieces. The first track for each of the three named composers is a prelude, setting the mood for the dances and fantasias which follow. The dance pieces are quite short, ranging from a mere 31 seconds to 1’41”, but the fantasias are more substantial. Track 12 is a Fantasia by Diomedes from Besard’s Thesaurus Harmonicus (1603). It is a fine piece, and well sustained by Held, albeit skipping a low G (a6) just towards the end. Track 15 is an extraordinary fantasia, five minutes long, with interesting chromatic turns and a couple of bars towards the end which are reminiscent of Dowland’s Semper Dowland Semper Dolens. The piece was the first to be included in Robert Dowland’s anthology, Varietie of Lute Lessons (London, 1610). From the same source Held plays a fantasia by Polak (Track 31). Something seems to have gone wrong with the recording at bar 15, because some notes are missing.
All the anonymous pieces are from D-B Danzig 4022. The first, and at 6’08” the longest, is an interesting set of variations on Monycha [=Monica] aka Une Jeune Fillette, which Held takes at an appropriately unhurried speed. I am less happy with his leisurely speed and use of rolled chords for Track 20, the well-known dance from folio 20v of Danzig 4022, which I feel needs a more sprightly, foot-tapping interpretation.
Track 24 is a lively Volte by Polak, which has a clear 2-part texture (occasionally filled out to 3-part), with nice interplay between treble and bass. Held’s brisk tempo is ideal, and he has contrasting loud and soft for the first section. Surprisingly he omits the first note of bar 9, but he does include three chords missing from the source (Lord Herbert of Cherbury’s MS), which were inserted as bar 21 in Piotr Pozniak’s edition.
Most useful is a list of sources provided in the liner notes, so if you want to follow the score, or play the pieces yourself, you know where to look. I cannot find any information about the sort of lute Held plays for the present CD. There is an uncaptioned photo of an eight-course lute on page eight of the liner notes, but no information about it or its maker.
I have always liked Held’s playing. Unlike so many of today’s lutenists, he eschews excessive rubato, and actually plays in time. He must have heeded the advice from the Johannes Nauclerus lute book, which he quotes in his liner notes: “And you must observe the beat, if you will court fair Maidens.” I wish him luck with amorous activity.
Anonymous
Balletto Polacho
Courrante Sophla Monycha VB
Monycha

From the Schola Gregoriana Silesiensis:
Signed ceremonially at the refectory of the Dominican monastery in Lublin on July 1, 1569, the Union of Lublin treaty was preceded by six years of efforts on the part of the king and all the estates of the Grand Duchy of Lithuania and the Crown of the Kingdom of Poland toward “improving this unification” which had lasted for almost two centuries since the Union of Krewo. The signatories to this document agreed that its provisions were “never to be changed, but to remain in force for ever… making a pledge and a promise before God”. Gratitude should be expressed to Divine Providence for an event like this, especially as now, with the benefit of hindsight, we know how enormously important the Union was for the Polish-Lithuanian Commonwealth, which continued to thrive for almost two and a half centuries.

We cannot but remember this day with gratitude. We believe that following the diplomatic success all the participants in this event gathered at the Dominican Basilica of Holy Cross Relics, where a solemn High Mass was celebrated. Our CD is a fantasia on the theme of such a thanksgiving Mass, which would certainly have been thanksgiving to Divine Providence. The propers for the votive Mass of the Most Holy Trinity, which most probably would have been chosen for that occasion, were found in the Graduale of Brother Wiktoryn, dating back to around 1540 and kept in the library of the Dominican monastery in Cracow. This kind of chant would certainly be performed in those days in the Lublin monastery as well. The ordinary of the Mass had to be the solemn Missa Te Deum by Krzysztof Borek. This little-known Renaissance composer died around 1573, leaving only two Masses which were found in the collection of the royal Rorantist Choir. There is no indication as to whether his Missa Te Deum could have featured in the repertoire of Lublin’s Dominican choir, but since it is based on a cantus firmus taken from the thanksgiving hymn Te Deum, it seemed the most proper one for this laudatory spectacle, especially as it was composed in the times we are referring to. For all we know Krzysztof Borek might have been commissioned to write it by the king…. The piece owes its unusual character to the use of the imitation technique in its texture. Each part of the Mass ordinary contains quotations from the Te Deum. These selected verses are formally unrelated to the content of these pieces and are woven into their polyphonic structure. As a dominant cantus firmus, they serve as an element ordering this originally loose structure. The composer matched the sense of particular verses from the hymn with the content of each part of the ordinary in which they were used. To enhance the dramatic effect of the thanksgiving service it was only proper to round it off with the Te Deum itself. We made use of Dominican chant in order to preserve the unity of the monodic forms featured throughout. However, such a solemn celebration, perhaps with the king himself in attendance, needed to have some additional splendor added by iubilaeorum, i.e. parts played by instruments allowed in liturgy at the time. Trombones and cornets were chosen, the rationale being that all trumpets produce sound not by themselves but as a result of instrumentalists blowing them. Moreover, these instruments sound very powerful and at the same time sparkle with the most mellow light. This is why an alternatim version of the Te Deum was created specially for this recording, combining the Dominican chant with fragments of Krzysztof Borek’s Missa Te Deum transcribed for a trombone ensemble and a cornet. These fragments correspond to the passages of the Mass featuring cantus firmus fragments of the hymn analogous to the selected verses. It can be said that we composed this hymn specially for this event….

Needless to say, the instruments add splendor to the entire event appearing as they do in other parts of the celebration as well. The whole thing begins with a solemn intrada which highlights the ceremonial entry of the sovereign. Then a cantor sings a laudatory song in honor of King Sigismund the Old – Sigismund August’s father – who was the real driving force behind renewing the union initiated with the pact concluded by Władysław Jagiełło in Krewo. Thus ends the Jagiellonian era in the most splendid period of Polish history. The instrumental music accompanying the whole celebration was entwined with the liturgical parts with due care for the coherence of the ceremony. Thus, we start off with an instrumental version of the Introit Benedicta sit; then a short Preambulum separates the Gradual from the Alleluia; the homily is replaced with a beautiful epic Resolutum, while a solemn Preambulum played during the Elevation accompanies the Canon of the Mass. A plainsong Benedicamus unfolds into the solemn thanksgiving hymn Wesel się polska Korona (Rejoice, Polish Crown) played by the instruments, which go on to accompany the singers performing the triumphant song Jeśli greccy Hektorowie (If the Greek Hectors) by Krzysztof Klabon. The instrumental music comes from two organ tablatures: one from Cracow’s Holy Ghost Monastery and the other by Jan of Lublin. Some of the pieces it contains were composed by Mikołaj of Cracow, one of the greatest Polish composers. It was specially for this project that we made transcriptions of this music for trombones and a cornet. We dare to think that some of them are given their world premiere on our CD.

9. Praeambulum in a per h – anonim, tabulatura Jana z Lublina