An amazing new recording on Alia Vox of Basque music; the first Indian music transcribed by a westerner (on harpsichord!); and an Americana sampler from Quire. 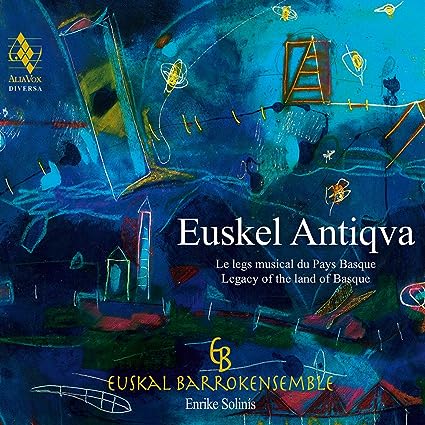 The term “Euskal Herria” defines the people who have “Euskera” (Basque) as their language. However, we prefer to use “Euskel” rather than the conventional “Euskal” because the fact that it appears in that form in the 16th century manuscript penned by Juan Pérez de Lazarraga somehow invites us to reflect on how words change over time, whereas the underlying reality to which they refer – in this case, the people whose common language gives expression to a particular socio-cultural world – remains unchanged.

Basque art, incomparably rich in its influences, has given us above all a great quantity of popular music. The Basques are an eminently musical people, and this is one of the reasons why early music can be be a valuable vehicle for conveying the Basque legacy to the world – a world of disparaging labels which have failed to fairly represent many peoples with a rich cultural heritage, but who have been sidestepped by the world’s mainstream classification systems. This new window on the world of culture called “early music” gathers together the music and literature of other ages, revealing how high culture and popular culture often to a large extent shared a common space as well as the fact that so-called early music is the  natural heir to popular music. The breadth and variety of the Basque songbook, and the country’s art forms such as literature, dance, painting and bertsolarismo, as well as classical music, of course, is in stark contrast to its presence in the artistic circles to which they naturally belong. Contrary to the opinion held in some quarters, Basque culture has always played a pioneering role in the field of art. In music, for example, as early as the 14th century it contributed to the development of musical notation,  and in Renaissance times the Basque Country boasted some great composers, including Antxieta and Bizkargi, among others. In  literature, there is a little-known but nevertheless substantial and varied body of Renaissance poetry in Basque (Etxepare, Lazarraga, Leizarraga…)

True to its vocation and to Basque culture, Euskal Barrokensemble aims to present a cosmopolitan view of Euskel Herria and its links to the wider world, a people made up at many points in its history of Muslims, Jews and Christians, distinctively reflected in a language and an art which are central to that great thoroughfare of European art that was the Pilgrims’ Way to Santiago. A clearly distinct people with one of the most ancient and unclassifiable languages in the world, a range of musical instruments so similar to and yet so different from those of neighbouring peoples, and which developed its art simultaneously with that of its neighbours: that is the image that we wish to convey of our culture. A Basque art which in the past had links to fashionable European currents; one which was often ahead of its time; and one which was also often complacent in its natural remoteness and introspection. A culture which, in the Renaissance, was slow to come to terms with the new face of Christianity, which clashed head-on with the Basque Country’s ancestral way of life and beliefs. A people who, despite their outstanding tradition of oral artistic expression, can also boast a rich tradition of written culture, both literary and musical. To fully experience Basque culture means enjoying all the many facets of Basque art, as well going out into the world to enjoy and learn from other cultures at the same time as we blend with them.

We wish to thank all the artists without whose talent and personal commitment this project would obviously not have been possible. The members of Euskal Barrokensemble have been overwhelmed by the selfless enthusiasm that each artist has brought to the enterprise. A totally altruistic art devoted to the pursuit of happiness. Eskerrik asko.

From Allmusic.com: William Hamilton Bird's Oriental Miscellany: Airs of Hindustan was the first collection of Indian vocal music transcribed in western notation, published in Calcutta in 1789 and in Edinburgh around 1805. Jane Chapman's program for Signum Classics presents the pieces on harpsichord (they were also arranged for guitar), and in order except for the fourth and twenty-second pieces, which are heard out of sequence in this recording. Claiming accuracy in his notation of pitches, Bird attempted to record the Indian melodies as he heard and played them with other Indian musicians, even imitating the drones of the sitar through repeated pedal points on the harpsichord. However, some of these pieces are clearly filtered through 18th rococo style, with typical dance rhythms and the insertion of open fifths or triadic harmonies. The Oriental Miscellany is followed by a Sonata for harpsichord and flute (or violin), where Bird also used Indian melodies, though they were more clearly shaped to European conventions. Chapman is joined for this performance by Yu-Wei Hu on Baroque flute, and the performance is pleasant if a little banal, as might be expected of such a slight composition. All the same, this album offers a glimpse of early western musicology and some charming music in the bargain. 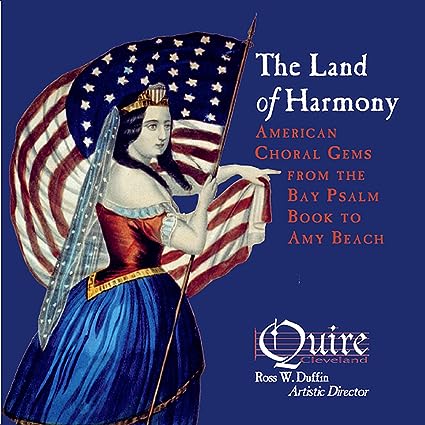 The Land of Harmony, is Quire Cleveland’s new recording of American music! It includes early versions of “The Star-Spangled Banner,” “When Jesus Wept,” “Amazing Grace” — and much more.

Quire’s artistic director Ross W. Duffin has chosen music to delight and entertain you — from the 1814 version of our national anthem to the “Hymn of Peace,” sung by a choir of 10,000 (!) to mark the end of the Civil War. Also featured is music by William Billings, Stephen Foster, Edward MacDowell, R. Nathaniel Dett, Amy (Mrs. H. H. A.) Beach.