The rediscovery of the music of Jean Mouton continues with the latest by the Brabant Ensemble directed by Stephen Rice.

NOTE: All of the music on this program is from The Brabant Ensemble directed by Stephen Rice. It is on the Hyperion label and is CD # CDA67933
For more information: 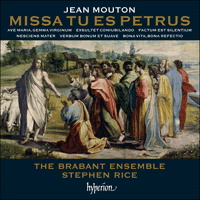 THE HISTORICAL SIGNIFICANCE of Jean Mouton
(before 1459–1522) has long been acknowledged,
but his music has rarely received the attention
that his position would suggest is merited. To modern
audiences only a few pieces are familiar: the remarkable
Nesciens mater , the joyous Noë, noë psallite, and the evocative Queramus cum pastoribus. (That all these three
are Christmas motets is probably coincidental.) Born
near Samer in the Pas-de-Calais, his first known singing
position was in the small town of Nesle, between Amiens
and St Quentin, which he joined in 1477, becoming
maître de chapelle in 1483, by which time he was also a
priest (and therefore over the age of twenty-five). In the
1490s there is sketchy evidence that he was active at St
Omer, and by 1500 he was master of the child choristers
at Amiens Cathedral. Thus far, Mouton was a provincial
cathedral musician. In 1501, however, he took a position
in Grenoble, on the edge of the Alps, but he left this post
without permission only a year later. It seems likely that he
had joined the chapel of the Queen, Anne of Brittany, who
visited Grenoble in the summer of 1502, and the last
twenty years of his life were spent in far more exalted
circumstances than perhaps he could have imagined
achieving as a middle-aged choirmaster in Amiens.
Mouton remained in Anne of Brittany’s service until her
death in 1514, transferring at that point to the chapel of
her widower Louis XII and, following Louis’s death the next
year, to that of Louis’s son-in-law and successor, Francis I.
As well as his continued employment at the French
court, Mouton found favour with the music-loving Medici
Pope, Leo X, who reigned from 1513 to 1521 and named
the composer an apostolic notary. There are several
mentions in contemporary writings of the high regard
in which Leo held Mouton’s music. Like many clerical
singers in the late Middle Ages, Mouton acquired several
benefices (positions as canon, rector or similar, which
could carry considerable income while often being held
vicariously). These included canonicates in Grenoble, St
Quentin, and Thérouanne. At his death in 1522, Mouton
was buried in St Quentin, as a few years earlier had been
Loyset Compère, another composer who may previously
have held the same canonry. Alongside his own output
of musical works, Mouton taught composition to Adrian
Willaert, a leading figure of the next generation who was
director of music at St Mark’s, Venice, for thirty-five years.
This album contains all of the works in eight parts that
can be attributed with confidence to Mouton’s pen. —Stephen Rice