Music of Hildegard von Bingen from the Oxford Girls’ Choir and Vajra Voices, and Benedictine Nuns in Poland.

Women’s vocal ensemble Vajra Voices presents their debut recording, O Eterne Deus- Music of Hildegard von Bingen. Also known as Saint Hildegard, Hildegard von Bingen (1098-1179) was a German Benedictine abbess, composer, philosopher, writer, Christian mystic, and polymath. She composed some of the earliest liturgical dramas and morality plays. Vajra Voices is directed by Karen R. Clark, and the ensemble is joined by multi-instrumentalist Shira Kammen for this recording. “One cannot help but be deeply moved by the exquisite rendition of Hildegard’s music by Vajra Voices. Their singing brings Hildegard into the room with all her passion and power and the Spirit arrives too along with angels eager to wake us up.” (Matthew Fox)

“The Vajra Voices, 7 in all, are a Berkeley-based all-female group who have Hildegard’s music at the centre of their repertory. Their strengths, apart from beautiful voices, include precise articulation and the confidence to be simple in expression. Voices blend beautifully, and Karen R Clark has a contralto well-suited to the spiritual depths of the music – a truly splendid voice.Listen either to the opening or the final pages, and one is touched by a depth and beauty. All in all, this recording belongs with the very best Hildegard collections, one for late night reflectiveness.” — Michael Wilkinson, MusicWeb International, July 26, 2016 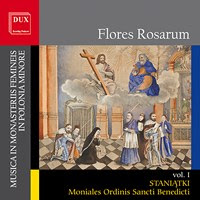 The history of the Benedictine Abbey in Staniatki goes back to the thirteenth century. It was founded between 1228 and 1238. It was from silence and in silence that the many melodies included in the old manuscripts have been created down the centuries. All composers remain unknown, as do the origins of the songs on this release.

"Flores Rosarum sing with both a warmth and clarity of tone and an admirable ensemble sense." --Rick Anderson, CD Hotlist, July 2016 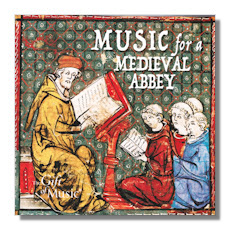 From Classical Net: If you're "converted" to the angelic and ethereal world of the actually very real and amazingly varied gifts and skills of St. Hildegard of Bingen, who lived a deservedly long life, from 1098 to 1179 – over 80 years – you will probably not mind that recordings of her ecstatic yet communicative music continue to be released apace.
Here is a collection of 15 mostly familiar pieces, none of which is unavailable elsewhere. It's sung with dedication by the Oxford Girls Choir and unnamed male vocalists with unidentified instrumentalists on some tracks, and directed by Richard Vendome.

The selection of Hildegard's works is a good one: there is the very familiar and oft-recorded as well as some more rarely heard works. There is variation in pace as well… Studium divinitatis [tr.2] and Laus Trinitate [tr.12] last barely a minute each while Ordo virtutum [tr.14] is over ten. What's more – for all this music's ready availability on disk – the girls in this choir sing with a freshness and evident attachment to the music, and even to some of the many wider acts of creativity and devotion which Hildegard has come to represent.

It's all the more disappointing that their roughness and inability to caress and respect the music consistently seems to take second place to their enthusiasm. It's true that Hildegard's work can be performed far too languorously; it could be argued that here the approach is an opposite: too "businesslike". It focuses less on uplift and subtlety than realism. It could well be that such was the way in which it was performed almost a thousand years ago. But one feels that there is just a touch too much haste and perfunctoriness where perhaps something of a gentle sidelong glance would have served better. These are not bad performances (some of those high notes notwithstanding); but a little undistinguished.

The acoustic, the chapel of All Saints Convent in Oxford, is slightly resonating and would be just what was needed to elicit both passion and precision from this music. The two page sheet that comes with the CD is decidedly minimal with a brief background possibly intended for those completely new to the world of mediaeval monasticism; and a track listing. Not the CD to put at the top of your list if encountering Hildegard for the first time. But one that has its merits.