You are here: Home / Playlists / A Last Christmas Meditation

One of our favorite ensembles, the Gothic Voices, remind us of the beauty of a Medieval Christmas. 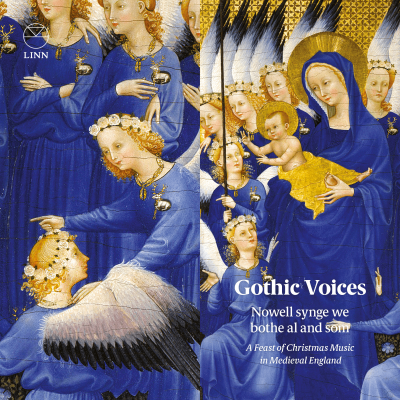 Gothic Voices’ reputation for the originality of its programming is cemented with its first recording of mediaeval Christmas music, in which Julian Podger reimagines a fifteenth-century carol evening.

Mirroring the modern practice of performing mostly music from the preceding centuries alongside some contemporary repertoire, the programme includes late medieval English carols, chant, mono- and polyphonic songs and motets for the Advent and Christmas season, focusing on Mary, her Annunciation and the birth of Jesus. Larger-scale festive motets and mass movements by English late mediaeval celebrities John Dunstaple and Leonel Power also feature.

The ‘evening’ concludes with a summons to wake up to the significance of Christmas, with the conductus call Resonet, intonet introducing the carols Nowell synge we bothe al and som and Nowell: Owt of your slepe and the great Christmas chant Puer natus est nobis, arranged here into a joyful finale. This recording has been widely anticipated since a performance of this repertoire in December 2016 was chosen by BBC Music Magazine as its number one unmissable Christmas event.

From Music Web International: This is a varied and generously filled disc of carols, mass movements and plainchants from the 12th to the 15th Century. The concept behind the selection of pieces is, as Julian Podger in his very thorough booklet notes says, to couch - rather tenuously I feel - the recital as a 15th Century entertainment, but one that explores the music of four centuries.

Gothic Voices has recorded Christmas music before - for example, the well-known fourteenth century carols Ther is no rose and Lullay, Lullay in the days of Christopher Page on their 1990 recording ‘The Service of Venus and Mars ’ (CDS 44252) - but never have they devoted a whole disc to these oft-recorded pieces. It is interesting to compare this with those earlier versions where Margaret Philpot was the contralto. She had to sing only five verses of the latter carol but Catherine King here wades through all fourteen - very admirably, I must add.

What makes Gothic Voices’ performances a little different from, say, the group Alamire (Deo Gracias Anglia!, Obsidian CD709) is that they sing completely a cappella. In addition, we have motets and mass movements by well-known, named composers like Lionel Power and Walter Frye.

The first twelve tracks are given over to music for Advent ,the preparation for the birth of the Saviour, and open with the melody we all know as ‘ O come, O come Emmanuel’ but here entitled Veni, O Sapientia, reminding us of the so-called ‘O Antiphons’ associated with the last week before Christmas. The remaining thirteen tracks are Christmas pieces, including the carol which gives its name to the CD, although some like ‘Ther is no Rose’could have been in either section.

Incidentally, in the early Middle Ages a carol was simply a round dance, which the church looked down on as it was often performed by young women in order to attract young men. Carols can of course be sung in any season but by the 15th Century the twelve days following Christmas were a time of celebration and the carol-singing.

It is especially good to have pieces from the Old Hall Manuscript on the disc, although they have been recorded several times before. Queldryk’s Gloria offers a rapid declamation of the text, shared between the three parts, in the prevailing French style of the period but Cooke’s quite complex polyphony in his Ave Regina Caelorum elaborates on the cantus firmus in the lower part in the traditional way. But who were these men? Queldryk also has a Credo in the manuscript and may have been a Cistercian at Fountains Abbey. Cooke seems to have served at the Chapel Royal and has left us nine compositions. These men were probably active when the beautiful Wilton Triptych was created for King Richard II, of which a segment beautifully adorns the cardboard CD case. We also have a polytextual isorhythmic motet by Dunstaple from the early years of Henry VI.

As an example of how Gothic Voices adds interest to the performances, the famous Angelus ad Virginum is given in three parts but for the fourth verse the lower voices supply a held drone under the tenor solo. They do a similar thing in a delightfully imaginative presentation of the two-part Edi be thu. Another nice touch is at the end of the disc, when the wonderfully joyous Nowell: Owt of your slepe with its typically English, frank, compound rhythms is broken for a minute with the plainchant Cantata Domino. Of course, you can programme your CD player to miss out that track if you wish. There is a variety of texture throughout the disc to keep your interest: monophonic, chant, discant style and polyphony.

Two pieces were new to me and possibly to you, too: the two-part Benedicite Deo and Resonet, intonet.

Christmas Eve of the Russian Orthodox Church (on January 6th) is traditionally celebrated in the liturgy of the Christmas Vigil (vsenoschnoye bdeniye). This most important event of the evening before Christmas is a service lasting many hours with much singing and with light processions. The Christmas message was also a source of inspiration for many Russian composers. They created music, which celebrated the depth, pathos and emotion of the Christmas story in all its splendour.

The present recording contains chants from the Christmas Vigil – one of the most beautiful Masses of the Eastern Orthodox rite – with works by the greatest composers from Russia, Ukraine and Bulgaria. In 1921, the unforgettable Sergei Jaroff founded the Don Cossacks choir, which he conducted without interruption until its disbanding in 1979. Under the new political freedom inspired by Gorbachev the Don Cossacks returned to their homeland and the Choir was re-founded in 1992. In order to bring the choir up to international level rapidly, the leading Dutch choir director Marcel Verhoeff was engaged, who, in the shortest space of time, made the Don Cossacks Choir Russia, as it is officially called, bloom as of old. All the members of the Don Cossacks Choir Russia are professional singers and come from old Cossack families of the Don, the Kuban or the Terek.