You are here: Home / Playlists / A Medieval Trilogy

A minnesinger and his “vale of tears,” the third in the Mare Balticum series, and works from the Squarcialupi Codex. Neidhart was one of the most popular Minnesingers—or “poet-musicians”—of the late Middle Ages. His songs deal with rustic, erotic and violent topics mediated, however, through court culture, which gives them a stylised, ironic sense of detachment. His division of songs into “summer” or “winter” adds another layer of complexity, with melancholy or dance-orientated topics prevailing, depending on the season. The instrumental music carries a rural character. The “Frankfurt Fragment” manuscript has never been recorded in full, and is here performed by one of the most outstanding ensembles in the field.
From Classical Net: Among of the first things that will strike you on listening to this highly enjoyable collection of the works of the Minnesinger, Neidhart von Reuenthal (c.1185-1240), and his (near) contemporaries is the focus, the clarity of projection, the paring down to his and their essential musicality by Ensemble Leones (Els Janssens-Vanmunster, voice; Baptiste Romain, vielle & bagpipe; Marc Lewon, voice, lute, vielle). For theirs is a highly idiomatic and persuasive set of arrangements on this appealing CD from Naxos. This is music that is almost necessarily "arranged" for suitable instruments. It's not always completely clear where the work of Neidhart ends and that of his arranger(s) – chiefly Marc Lewon – begins. Nevertheless, arranging 800 years later can all too easily be made to sound either more antique or more in keeping with a twenty-first century imagination than does the original music justice. In fact, its multi-layered aspects (see below) require such simplicity.

Instead, the effective singing voices of Els Janssens-Vanmunster and Marc Lewon (who also plays both lute and vielle) and the vielle and bagpipe of Baptiste Romain consistently yet unselfconsciously direct our attention to the at times almost slightly naïve – certainly somewhat resigned – tenor of these beautiful songs… Willekomen sumerweter süeze [tr.6], for instance, makes no attempt to overplay its simple message: summer is here but the joys it brings seem somehow transitory. Neidhart earned his epithet, von Reuenthal, (literally "vale of tears") somewhat erroneously in the 19th century. It's preferable, rather, to understand his musical and ideological stances in their own right: those of a somewhat detached observer of medieval life in the way that Chaucer was, or Boccaccio.

Indeed, throughout this just over an hour-long CD, there is an element of surprise – almost… "this is how I see the world, in all its beauty and wonder. My response to what I see is as valid as what I see". If you accept that we've in part lost that relationship with the world, it's all the more difficult to recreate it in performance now. But a humility and technical expertise by the members of Ensemble Leones work admirably and drive completely into the essence of this wonderful music. Their tempi and phrasing balance contemplation with certainty, wonder with forbearance, and the articulation of the texts – as said, clarity itself – produces the most felicitous and persuasive blend of acceptance with humor. These are songs that are built upon a Vale of Tears, for sure. But as Gegensang, anti-Minnesang. The conventions of courtly love and the troubadours are turned on their head. Not as pastiche or overdone parody. Still less as satire. But surely inviting – as did Shakespeare – his noble listeners to examine how far from the ideals celebrated in their culture they had departed. Neidhart's protagonists are the rural poor with apparent pretensions to such courtly ideals. Yet they fail.

But the complexity goes deeper still: Neidhart tended to classify songs into Winter and Summer "moods" with many of the obvious (and some less obvious) connotations. So there is a kind of "code" of associations, hints, direct criticism and endorsement of mores, glosses, commentaries and self-expression. But all filtered, one knows, through the mind of a very astute and sensitive observer. It is exactly this complexity in all its paradoxically simple demonstration that the three performers of Ensemble Leones have achieved so effectively and seemingly effortlessly here. Their own singing bridges the gap between sharp observer and imaginative creator: they make both necessary. Yet fresh. The manuscript the Ensemble has used is the earliest surviving collection, the Frankfurt Neidhart-Fragment of about 1300. Given its poor and incomplete state of preservation, substantial reconstruction has been necessary.

The CD's booklet is informative, particularly on this text and its provenance, use and adaptation; it's well up to Naxos' usual standards. The full texts of all the works on the CD can be downloaded as a PDF accessible from http://www.naxos.com/libretti/572449.htm. The acoustic is everything one would expect: close, clear and plain. Works by Walther von der Vogelweide and Adam de la Halle are included for contrast – as are tracks where performance owes as much to the vision thereof of Baptiste Romain as to the music and poetry of Neidhart directly. If this is repertoire, previous experience of which has even remotely pleased, then don't miss this CD. For specialists and lovers of this aspect of musicology, it must be bought and explored repeatedly. Highly recommended.

Volume 3 of the already critically lauded TACET Mare Balticum series pays homage to Wizlav von Rugen (c. 1268-1325) with the first complete record-ing of his songs. Ensemble Peregrina, founded in 1997 by Polish singer and musicologist Agnieszka Budzinska-Bennett in Basel, researches and performs sacred and secular music from ninth to fourteenth century Europe. The ensemble’s main interest lies in the early polyphonies and monophonic repertories of the Notre Dame school and Aquitanian nova cantica; the aim always being to look for a creative “counterpoint” to the mainstream in the less known peripheral sources. The ensemble’s programmes are characterised by a careful choice of themes and pieces, always paying close attention to their textual and musical interrelationships. At present the core of the ensemble is Agnieszka Budzinska-Bennett, Lorenza Donadini, Hanna Jarvelainen, Grace Newcombe, Baptiste Romain and Marc Lewon.
The modern man seems to have more in common with his middle age ancestors than might be welcome to him. But don't look at this only negatively. There was more than pest and cholera at that time. Volume 3 of the already famous TACET Mare Balticum series pays homage to fairy-tale Wizlav von Rügen. Following his songs the emotional life of that time must have been very similar to ours today. What witty linguistic ideas he was inspired to by love! The project Mare Balticum aims to present the medieval musical heritage of the Baltic Sea region in the 12th-15th centuries. It consists of four musical programmes, prepared in great detail, and employing the newest musicological, philological, historical and organological research. Each of these programmes presents the local character of a different coastal region of Balticum, its specific historical and cultural situation, its most important saints and rulers, and the Christian roots of the relevant country.
Der walt 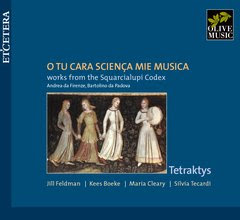 The uniqueness of the Squarcialupi Codex lies not only in its overall lavish presentation, its precious miniatures and its generous use of gilding. More than anything, it possesses peculiarities that are not to be found in any other musical manuscript of the 14th and 15th centuries, and that shed a spectacular light on Florentine musical culture. It was most likely manufactured between 1410 and 1415 in the monastery of S. Maria degli Angeli, a convent that was founded around 1300 and for which Filippo Brunelleschi had started a new church around this same time.

The vast Codex only contains secular works by 14 composers that all worked permanently or at least intermittently in Florence. It is strictly arranged according to composer, and chronologically: the oldest, Giovanni da Cascia at the beginning, the youngest, Andrea de Florentia at the end. Many of the songs on this CD are premiere recordings.

The Codex Squarcialupi, which owes its name to one of its first owners, the organist of the cathedral of Florence Antonio Squarcialupi (1416-1480), is one of the most unique and avangardistic music compilations throughout the Middle Ages. And not only for its content, consisting only of pieces of a profane character (226 ballads, 115 madrigals and 12 cacce) or the exceptional quality of its illuminations, but, and mainly, by its internal structure, structured chronologically around the fourteen composers active on a permanent or intermittent basis in Florence during the fourteenth century and whose portraits appear at the beginning of each section. This particularity undoubtedly reveals a new perception of the individual as an artist, much closer to the sensitivities of the renaissance than the middle ages.
Although it is not easy to choose between so many works, the fact is that the members of Tetraktys offer us a coherent program, of an overflowing beauty and, above all, representative of the evolution and development of Ars Nova in Tuscany. Thus, from the piece that opens the album, the famous madrigal by Giovanni da Cascia O tu cara sciença mie musica , probably the most ancient of all that the manuscript contains, to any of the ballads and madrigals of Bartholino da Padova and Andreas da Florentia, the four members of Tetraktys, fully engaged in a repertoire that they know to perfection, display a wide variety of stylistic, musicological and aesthetic resources allowing a performance rich in nuances and contrasts (the organological variety deployed between one composition and another is truly admirable). This disc seems to us admirable from all points of view. A new success, then, for Jill Feldman and Kees Boeke in their new career in Olive Music.