You are here: Home / Playlists / A Musical Journey

The release of a new recording from La Morra is always exciting in terms of creative and imaginative artistry and not just within the realms of late medieval and early Renaissance music. With a disc focusing on the 15th-century composer Petrus Wilhelmi de Grudencz, in a production from the Schola Cantorum Basiliensis strand on Glossa, the ensemble is set to repeat its happy knack of alighting upon an area of largely untravelled repertoire and making a fascinating programme from it.

Wilhelmi was what can be called a Central-European composer: born in today’s Poland he was active in German, Bohemian and Silesian territory, a musician from within the Holy Roman Empire, and open to new trends coming from the West and South. Without being a cultural force to rival his near contemporary Guillaume Dufay, Wilhelmi provided music which had a long-lasting appeal for the learned, non-professional musicians in Central-European lands. Corina Marti and Michal Gondko, the Swiss ensemble’s joint artistic directors since its formation back in 2000, add their skills as instrumentalists (keyboard, recorders and lute) to those of their quartet of singers in a survey which also embraces further Latin and secular-texted compositions by Nicolaus de Radom, Johannes Tourout and Othmarus Opilionis de Jawor, further examples of how Central European composers were absorbing ideas coming from the Franco-Flemish tradition, Italy and the Ars Nova from France. 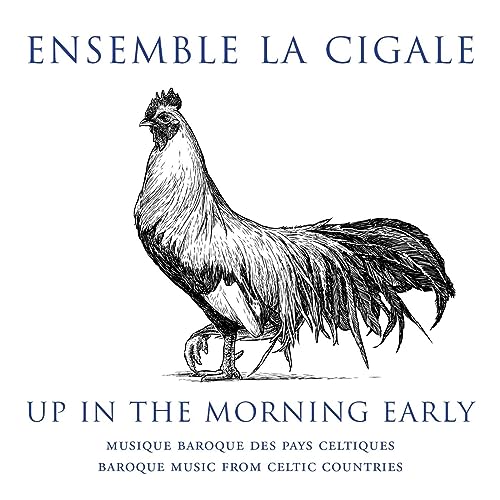 Montreal-based Ensemble La Cigale has released their new album Up in the Morning Early. This is the group’s second full-length album and features a collection of rarely recorded gems from Celtic countries (Ireland, Scotland and Wales) performed on period instruments. The ensemble’s first recording Tiorba Obbligata was nominated for Québec’s prestigious Opus prize for Album of the Year: Medieval, Baroque, Renaissance in 2014.

Well before the Nationalist schools of the nineteenth century, Celtic music in general, and Scots tunes in particular, enjoyed a period of great popularity throughout Great Britain. Composers trained in the Italian art music of the time borrowed traditional Celtic melodies and used them to create musical hybrids which owed as much to the ornamental stylings of Corelli as to the fiddle and lute traditions of Scotland. Strangely, the actual Celtic composers, arrangers and publishers of the period, many of whom synthesized the traditional idioms of their native culture with real flair and affection, are often overlooked in explorations of what was dubbed the “Scots drawing room style” by the eighteenth-century music publisher James Johnson. The goal of this recording is to bring attention to these over-looked composers. The programme includes works by James Oswald, General John Reid, Edward Jones, William McGibbon, Turlough O’Carolan, and excerpts from the Rowallan and Straloch lute books.

4. Airs for the Winter, Hawthorn: I. Plaintive: Amoroso

18. For kissing, For clapping, For loving, For proving (Rowallan Lute Book 16th-17th Century)

19. Up in the Morning Early

24. The Bonniest Lass in a' the World

25. Airs for the Spring, Ranunculus: I. Aria: Moderato

28 . Airs for the Spring, Narcissus: I. Air: Pastorale andante

From Audiophile Audition: I have often been asked over the years what the real differences are between Gregorian and Byzantine chants. After all, most scholars—though the evidence is not conclusive—allow for the idea of both corpuses stemming from the same source in origin, mainly the Hebrew psalmody during the formation of the Christian Church, though both Gregorian and Byzantine chant as it is known today are in fact later developments. Both bodies were influenced by the Greek octoechos system of modes, the Gregorian getting the main thrust from the Frankish-Roman Carolingian influences in the mid-late first millennium, while the Byzantine labored under efforts from the establishment of Constantinople through its fall in 1453. Needless to say, the field of each presents an inexhaustible mine of study for researchers, and many more dots remain to be connected before we can have even an inkling of the origins of ecumenical Christian Chant.

This latest disc from Cappella Romana and its intrepid director Alexander Lingas, does not attempt to answer these questions of origin, but instead to focus on a locale where both traditions were present simultaneously, the island of Cyprus, during late medieval times. The selections honor the patron saint of Cyprus, Hilarion (a great third-fourth-century ascetic), and also offers music from the Cypriot Codex. Cyprus has been conquered and reconquered numerous times, and as a result there are vestiges of many religious and cultural presences, not least of which are the majority Orthodox, at least 80% of the population, and probably higher than that. The Roman Catholics are less than two percent currently, but that does not erase the historical presence that was quite significant.

The premise of this disc is that by walking the distance between the Orthodox and Roman Catholic Cathedrals in the capital of Nicosia in the fifteenth century, music such as that found here could be heard easily. Both shared the common heritage of setting the psalter and other evolving texts, and each was unaccompanied and geared toward the idea of worshipful expression as opposed to the later more emotive settings that appeared in the first years of the pre-Baroque age. Chant, as it was called, served the purpose of elevating the experience of corporate praise to God, keeping the deity first and foremost in mind, instead of the more sensual attractions that seemed to have the stimulation of the listener’s emotions as a primary consideration.

Hearing this Orthodox and Roman Catholic music side-by-side is quite enlightening. Saturate yourself in either for about an hour and then switch for another hour, and you’ll swear they are the most disparate genres ever. Listen to both, sometimes alternating as here, and the similarities are striking. In fact, there are moments when you just can’t be sure which you are hearing. This is not an historical program, nor is there any intention in “authentic” practice; instead we have an innovative and exploratory presentation of two “competing” musical idioms thrown together by historical coincidence, that perhaps participated in a certain amount of cross-pollinizing, yet remained a vital and vivid focal point for the ecumenical meeting of two great traditions sharing essentially the same neighborhood.

Cappella Romana is at its sterling best, well-disciplined and highly focused readings of authority, clarity, and, most importantly, genuine empathy and feeling. Couple that with ingratiating sound and you have a highly desirable disc.