For a while the amazing French label allowed groups to experiment—Sephardic music, Andalusian melodies, and some visionary work by Christina Pluhar.

NOTE: All of the recordings on this program are from the Alpha white sub-label Chants de la Terre series, "devoted to pieces stemming from oral tradition that have had a considerable impact on the written repertoire and continue to enchant the ear.” 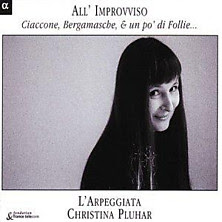 Your purchase will help support Millennium of Music.
From the BBC: All'Improvviso...ok, there'll be improvisation then. But it also means suddenly in Italian, and there's an immediacy and freshness here that grabs you right from the first few bars. If you haven't met baroque harpist Christina Pluhar and her group l'Arpeggiata, then it's time you did. They're from the French Alpha labels stable of unusually gifted musicians who work in that grey area where art music meets folk, and here they're exploring the simple repeated basslines and harmonies that have formed the basis for all kinds of music, in every continent, from the earliest dance music, through folk, classical, romantic and contemporary art music, jazz, and of course pop and rock. 'Chaconnes, Bergamascas and a little bit of madness' is the CD's subtitle; the chaconne which seems to have come from 16th century Peru to the height of baroque sophistication; the bergamasca from Bergamo in 16th century Italy (still found in traditional Italian music), and the madness folia a crazy dance style that spread from Portugal through Spain and Italy, and into the music of the royal courts of Europe.
L'Arpeggiata's way of improvising on these ground basses and repeated harmonic patterns is deliciously entertaining. Sources range from 17th century chaconnes to the first track - a new song by Lucilla Galeazzi, and from the moment she starts singing about the beautiful house she wants, filled with tears and laughter, music and poetry, I was hooked. Marco Beasley's voice is just as naturally communicative, and Gianluigi Trovesi's pungent clarinet solos almost swing us into jazz. Add to that the toe-tapping continuo on baroque guitars, harp, lute and theorbo, some sparkling cornet-playing and lively strings, and you have crossover of the highest quality, from performers who recognise no boundaries in 400 years of music. Magical results, from the meanest ingredients, and it ought to be available on prescription to the clinically depressed.

The Judaeo-Spanish repertoire is undoubtedly one of the richest and oldest of the Jewish musical heritage. These songs and poems, sung in Hebrew, Aramaic, Judaeo-Spanish or in Arabic, sound as a call to reconciliation

From AllMusic.com: This album is not just about the southern Italian tarantella dance; it actually proclaims itself as an antidotum Tarantulae, an antidote to the bite of the tarantula. Both the spider (which is not the same animal as the feared tarantula of the southwestern U.S.) and, indirectly, the dance are named for the city of Taranto in southern Italy. La Tarantella presents tarantellas interspersed with other songs of the region, some traditional, others with known composers. The texts of the vocal pieces are in southern Italian dialects, translated in the booklet into modern Italian, French, and English. The liner notes, in French and English only, are a delightfully diverse lot, with excerpts from writings dating back to the Renaissance, medical and more metaphysical musings on the "tarantism" phenomenon, and several passages that invite the listener to experience the tarantella phenomenon for herself or himself. The pieces included touch not only on the dance but on phenomena that influence the bodily "humors" that the spider's poison was thought to affect. Thus there are songs of love, night, poverty and alms-giving, and more. Some are dances with lots of percussion, others are melancholy. As L'Arpeggiata leader Christina Pluhar writes, "Each of these pieces presents a musical universe in itself, and is functional, therapeutic music, which could stretch over several hours or days, as required. The decision to enclose these dances in a restricted period of time has a practical basis: the real amount of time that can be pressed on a CD." Keep this in mind if L'Arpeggiata gives a concert in your town! "It is left up to the listener to play the pieces in sequence, or to pick out a song that elicits a particularly strong reaction from him," Pluhar goes on.
Plainly, this is one of the more original album conceptions of recent years. If you're afraid of spiders, don't buy it; there are several close-ups of the beasts in the booklet notes. And, since the tarantella is still ritually danced in certain southern Italian towns, it would be interesting to know whether it's a louder thing, danced to music with a stronger tendency to break down physical and mental defenses, than what Pluhar presents here. The dominant sound on La Tarantella is Pluhar's Baroque harp, accompanying some very expressive but subtle singers. These questions aside, La Tarantella is quite an intellectual adventure, and you can't say that about every early music release.