You are here: Home / Playlists / Back to the Middle Ages

It’s been a while since we ventured back in time; this week, medieval Italy, Catalunya, and the importance of wine in Medieval times!

Praised in profane poetry and honored in religious symbolism, prescribed in medicine and fundamental element of the economy, wine was a fundamental part of medieval culture. Already established in Mesopotamia in the 4th millennia BC, the wine culture arrived in Europe after having passed through Egypt, Greece and Spain. After having spread throughout the Mediterranean basin, grape vine cultivation slowed its growth during the crisis of the Roman Empire between the 3rd and 4th centuries AC due to political and economic disorders which caused security problems and thwarted long term agricultural activity. Consistent production was guaranteed by the church because of the necessity of having wine available at all times for liturgical rites. Wine brought into the Middle Ages the symbolic meanings which it had accumulated in the previous centuries. As a means of communication with the divinities and frequently present in rituals, it was fundamental in ancient Egyptian ceremonies where the grape was called “the eye of the god Horus”. In ancient religions wine was considered a gift of the gods given to man by Osiris for the Egyptians, by Bacchus/Dionysus for the Latins and the Greeks, by Saturn for the italic peoples and by Noah for the Jews, while the Etruscans considered Voltumna the deity who protected the vines. This drink which promoted life and immortality was present in funeral commemorations and banquets and was spread o­n the tombs during the so-called libation. The music on this release is dedicated to that ever-famous drink.

“Con voce quasi humana” presents a panoramic view of the secular music of the Trecento, from the earliest surviving anonymous pieces from the Rossi codex, and those by the first musicians whose actual names we know (Piero, Giovanni da Cascia, and Jacopo da Bologna), via the florid style of some of the best-known Florentine maestri (Francesco Landini), to the rapid decay of this culture in the early Quattrocento. The majority of pieces recorded here come from what is arguably the most important and lavishly executed collection of Trecento music – the famous Squarcialupi codex, now preserved in the Biblioteca Medicea Laurenziana. A special aspect of this recording by the Perlaro Ensemble lies in the all-vocal interpretation of the Trecento pieces. Through this approach, a clarity of pronunciation and phrasing is attained that to a certain extent makes it easier to hear all the “voices” within the various compositional styles and genres, such as madrigals, ballatas, and caccias. On the other hand, the title, “con voce quasi humana” (with a quasi-human voice) also represents human voices in the form of conversations in the song texts. Moreover, this recording focuses on songs about singing, songs that carry the listener away to an ideal place, putting him/her into the poet’s mood. It is up to each person to decide whether the songs seduce or cause torment, or whether they give the listener happiness with their enchanting beauty. 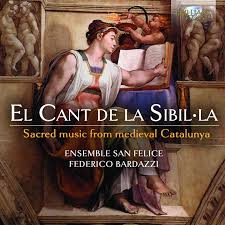 Who were the pilgrims who climbed the treacherously steep mountain to the monastery of Montserrat in northern Spain? And what kind of music would have accompanied their journey? This release imagines Christmas Eve in medieval Catalonia, built around the 'song of the Sibyl'. The tradition of the singing Sibyl was not unique to Montserrat, but it was covertly practiced there long after it had been outlawed by the Council of Trent in 1575. The Sibyl was a pre-Christian woman who prophesied the coming of Christ; during the Middle Ages, a boy would dress up as the Sibyl and, blindfolded, sing the famous verses, normally in the third nocturn of the Christmas Day matins service. This recording uses the Catalan version of the Sibyl's song found in the archives of Barcelona Cathedral. Another Catalan book from the same period, the Llibre Vermell de Montserrat, also informs much of this programme. It would have provided pilgrims with suitably religious music to sing on their approach to the cathedral, rather than secular songs and dances. The additional use of Gregorian chant sets the Cant de la Sibil·la in its original context of the early morning matins, before these were standardised into the Office of Readings. Finally, the addition of a traditional secular Catalan song – which tells the story of the doomed Count Arnau – marks the period in the night when the pious pilgrims, eagerly awaiting the opening of the monastery, would give the floor over to storytellers.

This album is the result of a unique project involving professional and amateur artists. The project was premiered as the first concert of a new annual festival in Florence run by Federico Bardazzi and Alessandra Montali, 'InCanto Armonico'. Established group Ensemble San Felice, who, under Bardazzi's direction, have previously made several successful CDs, were paired with the children's choir of the Cathedral of Sarzana, Pueri Cantores, who make up the 'voci bianche'. Featuring young soprano soloist Chiara Galioto, and performed on period instruments, this recording provides the listener with an enchanting aural portrayal of medieval Catalonia.