We are just back from a journey to London where we spent time with Musical Director Graham Ross, who shares his teaching philosophy and the great new recording of music for Corpus Christi, including Josquin’s masterful Missa Pange lingua.

From Graham Ross: Falling outside of the academic term, the feast of Easter provides an opportunity to programme music that undergraduates ordinarily will not have encountered as part of their term-time choral duties. This provides for an attractively fresh approach to the repertoire. My latest recording with the Choir of Clare College, Cambridge, Haec dies: Music for Easter, features a sequence for Easter Day spanning five centuries and much of the European continent. It is the latest release in our ongoing series of music for the church year on the Harmonia Mundi USA label, which has seen us thus far record music for Advent, Christmas, Passiontide, Ascensiontide & Pentecost, and All Saints & All Souls.
I book-ended this Easter programme with two late compositions of Lassus: a Mode 8 Eastertide setting of the Magnificat for the climax of the office of Vespers, and the wonderful opening motet Aurora lucis rutilat, the Hymn set for Lauds on Easter Sunday, displaying the composer’s use of Venetian polychoral technique. Recording in the magnificent acoustic of All Hallows’ Church, London, we attempted to recreate the spatial effects that might have been employed at the Frauenkirche in Munich, where the work is thought to have received its premiere.There is no better way of depicting the evolution of the Easter canon over the years than to include some of its oldest material: the plainsong settings of the Mass Propers for Easter Day. Here providing a framework to the sequence, the Resurrexi, Haec dies, Victimae paschali laudes and Terra tremuit chants are complemented by a number of polyphonic settings of the same texts by Palestrina, Bassano and Byrd, as well as a sparkling new Haec dies setting for choir and organ, commissioned from Matthew Martin. It was important to me to convey in the progamme the significance of the word ‘Alleluia’ which is woven through so much of this repertoire, made all the more celebratory as it would not have been heard in the church during the preceding season of Lent. Few can fail to be moved by the serenity of John Taverner’s setting of it, for example, in the third respond at Matins on Easter Day, Dum transisset Sabbatum.

Not one for shying away from juxtaposing differing styles (in our Christmas recording, John Rutter’s Nativity Carol segues into Schoenberg’s Friede auf Erden), and acknowledging my responsibilities in an academic institution, I try to expose my undergraduates (and, in turn, I hope, our audiences) to as broad a range of repertoire as possible, through carefully crafted and balanced programming. Here, the 17th-century antiphonal refrains of Scheidt’s Surrexit Christus hodie flow into the mysticism of Herbert’s Easter in Vaughan Williams’s setting, whilst stalwarts of the Anglican choral repertoire by Stanford, Hadley and Wesley sit alongside a movement from the Rachmaninov Vespers and Jean l’Héritier’s sublime Renaissance masterpiece Surrexit pastor bonus (a work that should be much better known). This varied programming happens three times a week in our choral services in the College Chapel, and the same is true of our recordings. It can, I hope, transform a potentially routine listening experience into an engaging and exhilarating one. 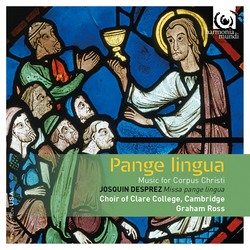 Continuing its series of music for the liturgical year, the Choir of Clare College now turns its attention to the feast of Corpus Christi, with a number of pieces setting the hymns of St Thomas Aquinas. Considered one of the Catholic Church’s greatest philosophers and influential theologians, Aquinas (c.1225–74) led a busy life of study, teaching and travelling. In 1264, at the request of Pope Urban IV, he wrote five Eucharistic hymns at the institution of the Feast of Corpus Christi. Within these relatively brief writings – just 188 verses in total – Aquinas has gained himself the reputation of being one of the great ecclesiastical poets.

Corpus Christi remains as one of the most important days in the liturgical calendar: it emphasises the joy of the institution of the Eucharist, having previously been observed only on Maundy Thursday in the sombre atmosphere of the forthcoming Good Friday.

The centre-piece of this CD is a complete performance of Josquin’s Missa Pange lingua, [c1515-21] one of the masterpieces of the Renaissance. The programme ends with Finzi’s ecstatic 'Lo, the full, final Sacrifice'. The piece was commissioned by the great Reverend Walter Hussey (also responsible for commissioning major works by Benjamin Britten, Henry Moore, Graham Sutherland, Leonard Bernstein and others); Finzi composed it directly after the Second World War in 1946 for the 53rd anniversary of the consecration of St Matthew’s Church, Northampton, where Hussey was vicar. Franncis Grier’s setting of 'Panis Angelicus' was composed in 2015 in memory of David Trendell, Director of Music of King’s College, London, who died suddenly in 2014 at the age of 50.