You are here: Home / Playlists / Crossing Over, continued

The London Town Waits, Trio Medieval with a twist, and Handel gets the Christina Pluhar treatment. Why these are the city waits, who play every winter’s night through the streets to rouse each lazy drone to family duty. These are the topping tooters of the town, and have gowns, silver chains, and salaries, for playing “Lilliburlero” to my Lord Mayor’s horse through the city.” This 1709 reference to a professional band of musicians conjures the thriving city of London in the 16th and 17th centuries. The band’s sound is replicated on this release by the modern-day namesake The City Musick directed by foremost expert in the field William Lyons (who is also director of the Grammy-nominated Dufay Collective). The drones of dulcians and cornetts, sackbuts and shawms, evoke the era’s civic events, theatrical productions and liturgal service, paying homage to the unsung talents of the Waits from the period when their reputation was at its zenith.

The City Musick was formed to explore the diverse repertoire of civic and court wind players in 16th and 17th century Europe and is now firmly established as the premier renaissance wind band in the UK. After its debut USA tour in 2009, including a performance at the reconstructed Blackfriars Playhouse in Staunton, Virginia, the ensemble has performed for traditional feasts and ceremonies in the City of London, at the York Early Music Festival, and in Florence and Antwerp. The City Musick made their BBC Proms debut in 2012 with a performance of Venetian music in collaboration with I Fagiolini. The resulting Decca recording and that of the Striggio Mass, also involving the ensemble, have both met with great critical acclaim.

With Händel Goes Wild Christina Pluhar and her ensemble L’Arpeggiata once again embark on some musical time travel, this time in the company of soprano Nuria Rial, countertenor Valer Sabadus and jazz clarinettist Gianluigi Trovesi. The album features sumptuously reimagined versions of some of Handel’s most celebrated operatic arias. “All baroque composers used strict forms,” explains Christina Pluhar, “but those forms would also allow the singers and musicians to improvise and add ornament freely.” Highlighting the composer’s dynamism and temperament, she says: “Händel must have been pretty wild himself.”

George Friderich Händel now joins Purcell, Monteverdi and Cavalli on the list of composers who have inspired an album by Christina Pluhar and her ensemble L’Arpeggiata. The title of this new album refers first and foremost to the imaginative treatment his music receives from L’Arpeggiata, but Christina Pluhar reminds us that “Händel must have been pretty wild himself,” quoting this famous anecdote: “At a rehearsal for his opera Ottone, when the celebrated soprano Francesca Cuzzoni refused to sing the aria ‘Falsa immagine’, he became so furious that he grabbed her round the waist and threatened to throw her out of the window.”

Fortunately, the ‘wildness’ on this album is purely pleasurable. Händel Goes Wild is in the beguiling vein of Music For A While – Improvisations on Henry Purcell, released by L’Arpeggiata on Erato in 2014. Praising that album, BBC Music Magazine wrote: “Long experienced in fusing Baroque with jazz-inspired performance styles, L'Arpeggiata's approach breathes new life into the Restoration composer, whose ground basses are akin to riffs, his melodies folk-like in their raw simplicity... Baroque instruments and a jazz-style combo mix to intriguing effect.”

From Adrian Pallant--Now turning their attention to German composer, and naturalised ‘Brit’, George Frideric Handel (1685-1759), L’Arpegiatta and guests interpret an array of works in Händel Goes Wild – most especially the operatic arias, here eloquently conveyed by countertenor Valer Sabadus and soprano Nuria Rial. The album title references the composer’s reputed, fiery personality more than this alternative musical approach which is sophisticated, invigorating, yet respectful. But that said, Pluhar boldly infuses both the familiar and less well-known with an ingenious mix of jazz, folk, pop and Indian flavours – all part of the attraction, discovering where in the world GFH will be taken next; though, undoubtedly and intentionally, it’s also the recognisable genius of the baroque master that shines out.
This lavish, 76-minute production is heralded by Gianluigi Trovesi’s bluesy, rubato clarinet and Francesco Turrisi’s jazz-inflected piano improv – a sign that the Sinfonia from Act 3 of Alcina has found a distinctly different direction, its classical strings ultimately augmented by frenetic, accelerando, Russian dance rhythms. From the same opera, the luscious countertenor, clarinet and cornetto strains of Verdi prati are a balm to the soul, as is Mi lusinga il dolce affetto (one of a number of readings which, for balance, don’t automatically seek an alternative path); and Brazilian percussion encircles glorious Venti, turbine (from Rinaldo). Popular Where’er You Walk (from Semele) pleasantly wrong-foots as Nuria Rial’s clear annunciation is accompanied by a bright, childlike clarinet motif with Latinesque piano triplets; and its operatic partner O sleep, why dost they leave me becomes a gentle, musical-box lullaby.

An impressive and ebullient improvisation, Canario, dances to rhythmic baroque guitar, inviting splendid individual instrumental soloing (including ’60s Hammond organ) and a wonderfully vitalising konnakol and percussion episode, whilst aria Pena tiranna (from Amidigi di Gaula) demonstrates still further how effectively Handel can be interpreted through limpid piano with subtle bass-and-cymbal momentum. Unexpectedly, the spirited jazz abandon of Arrival of the Queen of Sheba (from Solomon) can seem a little disjointed – perhaps too obvious a candidate for this project. Nevertheless, the vast majority of these fifteen selections gel superbly – and, as always with such considered and well-executed projects, it’s not impossible to imagine George Frideric enthusiastically experimenting with these textures and genres, had they been available to him. Indeed, how I wish he might have experienced the sublime theorbo and piano improvisations on Lascia ch’io pianga.

Semele: O, Sleep Why Dost Thou Leave Me?

Arrival of the Queen of Sheba (from Solomon) 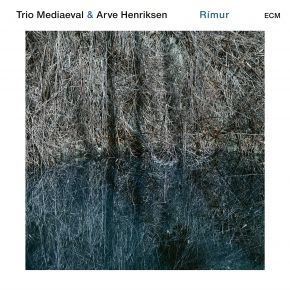 Joined by trumpeter Arve Henriksen, Trio Mediaeval presents a unique program in which mediaeval and traditional music from Iceland and Norway and improvisation are integrated. Album highlights both Trio Mediæval's vocal creativity and the dramatically orchestral scope of Henriksen's array of trumpets and electronics. “A richly musical and imaginative encounter,” as described by The Guardian in a concert review. Recorded February 2016 at Munich’s Himmelfahrtskirche, produced by Manfred Eicher.

From Tom Huizenga, NPR--It's a curious thing how ancient music can sometimes sound so contemporary. Listen to "Morgunstjarna," and it's as if three centuries' worth of music history evaporates. The anonymous song from 17th-century Iceland sports a catchy, bittersweet melody and rhythmic hook that pop outfits like Peter Bjorn and John might be happy to whistle.

But "Morgunstjarna" is no pop song. It is, in fact, a hymn to Jesus, "my star of the morn." It's sung in the traditional Icelandic Tvísöngur ("twin singing") style, in which two vocal parts closely intermingle. As the song opens, one of those "twin" voices is actually the breathy, atmospheric trumpet of Arve Henriksen. He appears throughout the new album Rímur, by the vocal ensemble Trio Mediaeval. The result is music that seems old and new at once. (In that sense, it's not unlike a previous project on the ECM label, Officium, which paired Norwegian saxophonist Jan Garbarek with the Hilliard Ensemble.).

Anna Maria Friman, in husky voice, offers a perfect patina over Henriksen's slightly jazzy trumpet. Her colleagues Linn Andrea Fuglseth and Berit Opheim join in after the first stanza, providing an ambling beat. After the second stanza, Fuglseth takes flight, soaring beautifully above the groove. For a few moments, we're caught up in a heavenly swirl of improvisation. There's a repeat of the opening lines and we gently touch back down to earth — a little lost in time, perhaps, but smiling.