You are here: Home / Playlists / I Dodici Giradini

A recent recording by the ensemble La Reverdie looks at the songs of St. Catherine of Bologna (1413-1463).

NOTE: All of the music on this program is from the recording I Dodici Giardini featuring the ensemble La Reverdie and Adiastema. It is on the Arcana label, and is CD A 367. For more information about this ensemble: 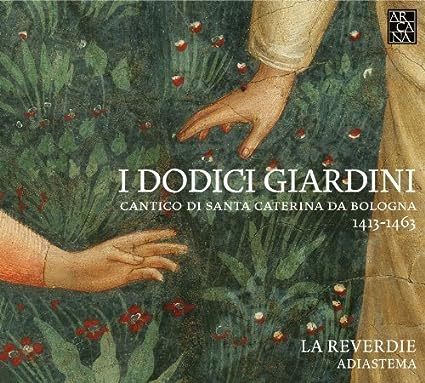 La Reverdie are not unused to somewhat obscure projects. A few years ago I especially enjoyed their ‘Musique dans la Pensée Médiéval’ (Arcana 332) and in 1995 their ‘Suso in Italia Bella’ with music dating back over a thousand years (Arcana A38). The present disc is quite complicated in its background and certainly in many ways their most obscure offering to date.

La Reverdie consists of six lovely ladies, four of whom not only play instruments like the vielle, rebec and portative organ but also have gorgeous clear voices. They are joined by Adiastema a further group of seven Swiss female singers who, oddly enough, only perform alone for one item, the beautiful two-part O Yesu dolce.

Caterina of Bologna lived from 1413-1463. She was well educated and at thirteen decided to give herself over to the life of prayer in the newly founded convent of ‘Poor Clares’ in Ferrara. In 1456 she became the founder of a new convent in Bologna. She copied out her own prayer book, a ‘Brevarium’ and illuminated it. Other manuscripts were produced by her sisters in the convent including spiritual poems and ‘laudi’- spiritual songs. She wrote a book, which was later much admired and copied, entitled ‘Treatise of the Seven Spiritual Weapons’. Her ‘violeta’, a small viol, has also survived. Her biography written in the 1470s is entitled ‘The Mirror of Illumination’ and includes various ‘laudi’ and ‘soneti’.

Singing was a vital element of worship and prayer and it was said created an ecstatic state of wonder. In the first of Caterina’s writings, a mystic treatise entitled ‘The Twelve Gardens’ (I dodici Giardini) she makes this clear. I quote from Livia Caffagni’s excellent booklet notes, one of La Reverdie’s musicians. These gardens represent “a description of the itinerary which must be followed by the soul in order to attain the mystical union with Christ: during three days of the pilgrimage the soul/bride walks through twelve different gardens that bring her always nearer to the Christ/beloved.” By garden eleven she is ready to ask to stand before God, “Fervent with ardent joy” as the lovelyCiaschaduna amante che ama lo Segnore tells us. By garden twelve a “unifying love” between the human and God is achieved.

In the Bologna convent are 130 ‘Laude’ but these lack their music. They date mainly from the 13th and 14th centuries. Their melodies were of folk origin and rarely written down. However “a handful of manuscripts of the 15th century belonging to North-Eastern Italy” contain the music for some of these songs. The style is mostly typical of Italian music pre-Landini. An example can be found in Anima Benedicta. This should not be too surprising as the laudi began life with the followers of St. Francis of Assisi (d.1226). There are also pieces in the early 15th Century style. These then provide us with a walk through the first eleven gardens, with the last given over to a stylistically in keeping setting of Et Gloria ejus by Doron Sherwin who is also known as a fine player of the cornetto on other recordings.

The accompanying booklet guides us through the gardens with written texts from Caterina's treatise, two of which are spoken. These gardens have names; the fifth, for instance, is entitled ‘Violets of Seclusion’ in which the bride’s mind can be ‘purified and renovated’. In it she can experience the “extreme sweetness she feels when she is alone with her beloved”. Is this a man or is it Jesus/God? You will also notice the strong connections with that most mystical of Old Testament books ‘The Song of Songs’ which is sexually charged but in which the lover and God are interchangeable. That is why a popular 15th century song like J’ai pris amour, in its three versions here by Martini, Isacc and Obrecht, is so typical and suitable. “I have chosen love as my motto / In order to achieve joy / I will be happy in that state / If I can accomplish my purpose”. Other texts are even more explicit and yet ambiguous. In Condesiderio vo cercando the singer craves ‘With desire I am trying / to find that beloved / amiable Jesus Christ / for whose love I am sighing”.

The point of progressing through these estates is that by garden nine “the will and tendency to sin both in mind and the senses is dormant”. Amazingly, by garden ten she has been “transported into the pleasures and joy of the longed-for beloved, as a result of divine copulation”.

It’s no good pretending that such a wide range of instruments as are used here were available in the Ferrara or Bologna convents. La Reverdie get around this neatly as the notes explain: “the different musical colours try to mirror the overwhelming wealth of metaphors referring to light, colour, heat, smell, taste and love”. So a piece like O Dilecto Jesu with its dance-like refrain sung by ‘Adiastema’ has a flute (really a recorder), portative organ, percussion and harp. The text reflects the use of such instruments “I want to sing and rejoice out of love for him”.

An esoteric disc certainly and you will otherwise struggle to find this repertoire on CD although there are a few examples. If it interests you then do snap this disc up now. It comes in a firm cardboard casing with - aptly enough - some attractive colour backings of paintings by Fra Angelico. The booklet has, as well as the essay, a complete list of manuscript sources and of the instruments and their makers. The recording is natural and there is a sense of the ancient Swiss convent built into the acoustic. --Gary Higginson