You are here: Home / Playlists / In Memoriam, 20 Years On

We presented an extensive set of memorial works after 9/11 in 2001; we remember 20 years later with Mozarabic chant, the Requiem of Simone de Bonefont, and New York Polyphony’s latest recording. 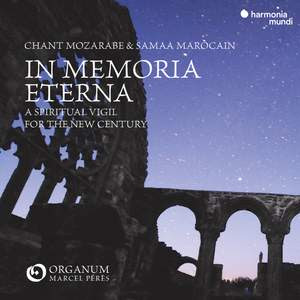 This recording came to fruition thanks to nearly 25 years of effort.

In 1997, Marcel Pérès and his Ensemble Organum began a simultaneous exploration of the Mozarabic rite (the liturgical chant peculiar to the Christians living in Spain at the time of Arabrule) and of the Samaa spiritual practice of Morocco.

A veritable utopia, the idea for this recording then suggested itself: to regain the lost accord of human brotherhood through music.

From AllMusic.Com: An album called In Memoria Eterna by a group called Ensemble Organum might seem likely to be a contemplative, even sedate affair, but in reality, this release is as experimental as any other to appear in 2021. Director Marcel Pérès terms it an "utter utopia," devoted to "deciphering the genetic code of spirituality." Listeners must decide for themselves whether these abstract goals have been met, but the basic musical stuff is plenty interesting. The album took shape in stages over a period of almost 25 years, and one key step was when the singers of Ensemble Organum, who have specialized in various kinds of chant, sang melodies from the Mozarabic chant of medieval Spain to a singer versed in the Samaa tradition of Morocco and found that he knew them and could answer them. Given the influence of Islamic rule in Spain, this is not entirely surprising, but the kinship is nonetheless compelling. The program is organized as a kind of prayer vigil, "comparable to the Sufi ceremonies of our day," in which solo singing alternates with choral chants in both Latin and Arabic. Individual tracks may combine material from both traditions, and Moroccan singers join those of Ensemble Organum. Experts may have questions about what has been done here. For instance, it's not clear what the rhythms of Mozarabic chant may have been and how these would affect the collaboration proposed here. However, this is an exciting release, beautifully recorded at the old La Réole monastery in France, that shows the kind of imagination necessary to find commonalities between our own time and repertories far away in the distance from it. 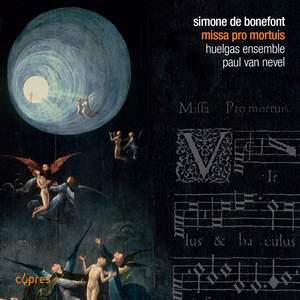 In perpetual search of unpublished works and forgotten composers, Paul Van Nevel invites us to discover a Requiem Mass for five voices, composed in 1556 by Simone de Bonefont, canon and cantor at Clermont-Ferrand Cathedral. The Missa pro mortuis can be considered as one of the highlights of polyphonic vocal style, encompassing all the characteristics of Franco-Flemish techniques of the period. The richness of de Bonefont’s polyphonic writing and his mastery of counterpoint are truly astonishing. True to form, the Huelgas Ensemble honours this unpublished score with a powerful interpretation, delivering music of incredible luminous tranquility. The programme also includes four compositions by Franco-Flemish masters - that de Bonefont may well have heard - on one of the most profound texts of the Gregorian repertoire: Media vita in morte summus (In the midst of life we are in death).
From Amazon: Very little is known of the life or work of Simone de Bonefont, born around 1500, master of music at the Cathedral of Clermont-Ferrand. However, this fine five-part Mass for the Dead has been preserved, published in a Paris choirbook of 1556 – its title page reproduced here in the booklet. Its five voices consist of cantus, high tenor, two low tenor and bass lines, the upper voice providing a cantus firmus over the busier polyphonic lines of the lower voices.

Paul van Nevel’s Huelgas Ensemble, singing with two voices per part, are well equipped to perform the work, with the exemplary sound, balance and vocal purity which they always show in renaissance music. This is a fine Requiem Mass, predominantly poised, consolatory in mood but with occasional striking dissonances. Completing the programme in similar vein, it’s followed by four different settings of the ‘Media vita in morte sumus’ text, from Arnold von Bruck (in German), Jacobus de Kerle, Orlandus Lassus and Nicolas Gombert. I especially appreciated the graceful, soaring lines of the Lassus work, as well as Gombert’s opening of rich, low-voiced textures.

While the main work may arguably fall a little short of its greatest renaissance counterparts from Lassus, Victoria and Morales, Bonefont’s is nevertheless a fine work and, for renaissance enthusiasts, interesting and well worth getting to know. Its performance here from Van Nevel’s ensemble is outstanding – both heartfelt and technically impeccable. So it would be most interesting to hear more by the composer but sadly, as Van Nevel tells us in his very informative booklet essay, this and three chansons are all the music known today from this very impressive musician.

This is an excellent live recording from the abbey church in Leuven, Belgium, with no audible sounds at all from the audience. Texts and translations are included. 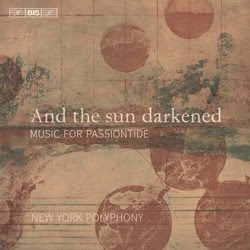 Champions of rare and rediscovered works of antiquity, New York Polyphony presents the world premiere recording of ​Loyset Compère’s ​Officium de Cruce, ​an elaborate, multi-movement motet cycle that rivals the masterpieces of Franco-Flemish contemporaries ​Pierre de la Rue and ​Josquin des Prez, ​both of whom also appear on the album. Additional works include ​Andrew Smith’s Salme 55​, ​Adrian Willaert’s​ ​Pater noster–​ ​Ave Maria, ​and ​Cyrillus Kreek’s ​Taaveti laul 22.
Officium de Cruce​ is an anomaly for its time – a long-form dramatic work likely intended for private devotional use. Composed for Galeazzo Maria Sforza, Duke of Milan from 1466 until his assassination a decade later, it depicts the events of the crucifixion of Jesus. The compositional techniques Compère employed, as well as the work’s overall expressive dimension, foreshadowed the innovations of Adrian Willaert and Nicolas Gombert a generation later. “The dramatic form of ​Officium de Cruce​ is, in a sense, a prototype for the madrigal cycles that began to appear in the late 16th century,” explains New York Polyphony countertenor ​Geoffrey Williams. “It has an expressive arc that is deeply affecting and innovative for composers of Compère’s generation.”Norwegian composer Andrew Smith’s (b. 1970) affiliation with New York Polyphony dates back to the ensemble’s inception. The music he has composed for the group has occupied such an important place in the group’s repertoire that they consider Smith to be a key factor in the development of their acclaimed sound. “It was through Andrew’s music that we learned to sing as a unit,” notes founding member and bass ​Craig Phillips​. “The format of his harmonic language, its reliance on the contours and colors of Gregorian chant, and how elegantly he sets text taught us how to communicate with each other, balance our timbres, and sing with uniformity of purpose.” Composed for New York Polyphony,​ ​Salme 55​is one of Smith’s most ambitious compositions. The text is a lament in which the psalmist prays to God for deliverance from the enemies that surround him, and the friend who has betrayed him. To illustrate the emotional extremes, Smith uses a range of techniques that include complex counterpoint, melodic fragmentation, and tonal ambiguity. The work received its premiere in 2014 at the Church of Saint Jean Baptiste in New York City and has remained a favorite in the repertoire of New York Polyphony ever since.