John Dowland in consort, William Byrd and John Bull, and a look at the “Elizabethan Avant Garde." 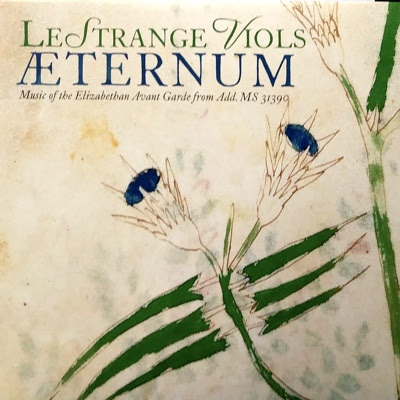 LeStrange Viols presents a second disc for Olde Focus Recordings: an exploration of a "Booke of In Nomines and Other Solfainge Songs," known by its shelfmark in the British Library as Add. MS 31390. From the 135-piece collection LeStrange has selected twenty-six compositions, many of which are recorded here for the first time. Some of these works reflect the "hottest new releases" of 1578 (when the manuscript was copied) while others are "golden oldies" from the first half of the 16th century.

From Early Music America: LeStrange Viols is a relatively new ensemble, having come together in 2014 to record their debut album, a modern premiere of eclectic, experimental consort music by the 17th-century composer William Cranford. While that album focused on the music of a single composer, here they explore the consort works notated within a single manuscript: London, British Library, Add. MS 31390. Entitled “A Booke of In Nomines and Other Solfainge Songs of V, VI, VII, & VIII Pts for Voyces or Instrumentes,” it contains more than 135 compositions copied in the mid- to late 16th century. The pieces range from (largely untexted) Magnificats, motets, and anthems to French, Italian, and English secular music and more than 60 instrumental works. It is clear that the manuscript was meant to be performed from, because it is notated in table-book format: each part is copied facing a different direction, such that the singers or players could sit around a table and see just their own part.LeStrange chose 26 of the manuscript’s works to record here. As they state, some of these were the “hottest” new pieces of their day, like those by newcomer William Byrd, while other works were the “golden oldies”: particular favorites from earlier in the 16th century, such as those by John Taverner or John Sheppard. Regardless of date, however, the pieces reflect a conglomeration of styles, textures, and techniques. Some are simple, singable, and popular in style, like the French chansons by Janequin and Clemens non Papa. Others are reminiscent of the Cranford album in their rhythmic and harmonic complexities; listen, for example, to the setting of Spes nostra by Osbert Parsley, which has a five-beat cantus firmus, or the In nomine by Picforth, in which each instrument plays only one type of rhythmic value throughout.

Peppered throughout are the delightful English cross-relations, and LeStrange doesn’t shy away from accentuating them, adding a delicious crunch to many of these works. In fact, they don’t shy away from much; they play with attention to dynamics and a lovely sense of phrase, each voice swelling and fading according to its own structure but always with a careful ear toward group cohesion and overall rhetorical gesture. They’re not afraid to have fun, though; the Picforth is delightful here with the cantus firmus bowed and all other voices plucking, and Christopher Tye’s setting of the In nomine ‘Crye’ is taken at a peppy tempo, allowing the various “cryes” to bounce frenetically from player to player.

As befits the manuscript’s title, a good third of the album is settings of the In nomine, but they are wonderfully interspersed among a variety of other types of pieces. Particular standouts are the album’s opening In Aeternum by William Mundy, Byrd’s O salutaris hostia, and the setting of Browning my dere by Clement Woodcock (perhaps the manuscript’s scribe); so too are the Clemens non Papa chanson and the Taverner In nomine, which have si placet voices unique to this manuscript. This is an album that would be highly recommended simply for paying unique and careful attention to works in their original context. Fortunately, LeStrange lives up to the promise of their first album, treating us to a fascinating musical experience as well. 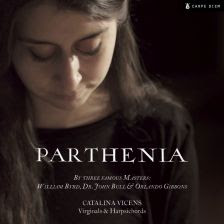 PARTHENIA is a collection of pieces for harpsichord and virginal composed by the three famous composers Byrd, Bull and Gibbons, printed in London in 1613 and dedicated to the marriage of Maria Stuart and King Frederick V.
The Chilenian harpsichordist Catalina Vicens celebrates the 400-year anniversary of this unique edition of English renaissance keyboard music on her debut album. To make this already diverse collection even more colorful, she uses not less than six different instruments, 3 of which are 17th c. originals. Enjoy this delicate boquet of early keyboard pieces played on virginals, harpsichords, spinettino and Muselaar, just as the royal couple may have enjoyed it for relaxation and amusement in good company.
From Gramophone: Given its historical importance and the fact that it only takes around an hour to perform complete, it is surprising that Parthenia – published in 1613 as ‘the first musicke that ever was printed for the Virginalls’, and celebrating the high status of English keyboard-writing of the time in 21 pieces (mostly pavans and galliards) by its three greatest masters – has not had more recordings. Colin Tilney’s Pye LP (1/69) has not been reissued, while CDs by Gary Cooper (Devorguilla) and David Ponsford (RiverRun) look hard to get (I’ve never seen either), meaning that this attractively presented debut solo recording by the Chilean-born harpsichordist Catalina Vicens is well placed to make a mark.

I hope it will. Vicens’s playing is unhurried, even in galliards, but she maintains the music’s spring and momentum through eloquently spread chords and rhythmic inflections; her timing of the tumbling flourishes that climax certain sections brings both controlled and effective releases of tension. And if you sense that her sympathies lie more with the richness and mellowness of Byrd and Gibbons than with the fidgety virtuosity of Bull, her fingers are certainly up to the task of carrying off Bull’s excitable passagework, the only hint of discomfort coming in the rampant left-hand semiquaver patterns of the St Thomas Wake Galliard.
The sound of this CD is also a treat. Vicens uses no fewer than six different original instruments or copies from the Neumeyer-Junghanns-Tracey Collection in Bad Krozingen, including a sparkily metallic Ruckers harpsichord, a sweetly bell-like Ruckers double-virginal (though its rattly ‘arpichordum’ stop is brought to bear in the disc’s final track) and a delectable little Italian 4ft ‘spinettino’. Two of the Gibbons pieces are performed in the scoring with viol ad lib proposed in a later edition, but although Rebeka Rusò adds her own fine musicianship to the mix, this is ultimately Vicens’s project, and a worthy one too. 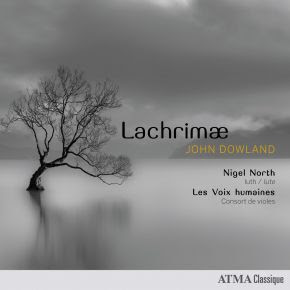 Replete with many musical effects, dissonances and suspensions, the same melancholic subjects reappear throughout Dowland’s compositions: the agonies of the soul, night, and darkness. This “tear” motif first appeared in the pavan Lachrimae for lute and served as the basis for seven “passionate” pavans in the 1604 collection recorded on this new album.
From AllMusic.com:  This is the second of two discs by British-American lutenist Nigel North covering the complete lute music of John Dowland, the lutenist Shakespeare would likely have thought of when he thought of the lute. The division of pieces between the two discs is logical, with Dowland's most famous instrumental work, the Lachrimae Pavan, included here along with a group of other pieces that are related to it in some way. The Lachrimae Pavan lives up to its name, but along with Dowland's self-professed melancholy came a more meditative quality; he seemed to enjoy taking a musical idea and working on it some more, even over and above the penchant of his age for reusing musical material and turning vocal into instrumental works. The "alternative version" of the Lachrimae Pavan, track 17, includes divisions or variations probably not by Dowland, but it is still interesting to hear in this context, and the final Semper Dowland Semper Dolens (Always Dowland, Always Sad) also reworks the Lachrimae idea. These works are joined by other pavans, lute versions of sad songs, a funeral piece, and Dowland's Adieu, and even the few faster-paced galliards have a sober tone. North's readings are not lugubrious but rather tap into the reflective quality of Dowland's music; the contents of the disc are sober, to be sure, but North conveys the feeling of a master musician at work in the chambers of a noble patron, setting high standards of skill, refinement, and imagination. The program makes sense on its own as a Dowland lute disc for those who may not want the set of two.