Before the ensemble The Gesualdo Six announced their first US tour for November, they released this recording dedicated to the circle around Josquin (including reattributed works).

Note:  All of the music on this program is from the recording Josquin’s Legacy featuring The Gesualdo Six directed by our guest, Owain Park,. It is on the Hyperion label, and is CD number CDA68379. 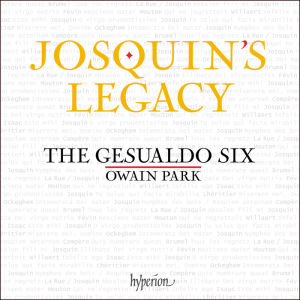 The vital key to understanding the chromatic development and compositions of Don Carlo Gesualdo (c1561–1613) is the time he spent at the Este court in Ferrara. Gesualdo, the ‘Principe di Venosa’, arrived in Ferrara for his marriage to his second wife Leonora d’Este in 1594, and it was here that he published his first two books of madrigals. Leonora’s family benefited from and patronized one of the richest musical cultures in Renaissance Italy, stretching back well over a century, and one epitomized by a single year at the opposite end of the sixteenth century: the year that Josquin des Prez spent as maestro di cappella at the Este court between April 1503 and April 1504, having been appointed by Leonora d’Este’s great grandfather, Duke Ercole I d’Este. Taking inspiration from Josquin’s 500th-anniversary year in 2021, The Gesualdo Six now explore Josquin’s legacy in Ferrara, a particular destination for composers from France and the Low Countries who were dubbed the ‘Oltremontani’.

This album explores some of the chief musical relationships between these composers in the early sixteenth century and how these were influenced by Josquin’s tenure. Our programme begins with Johannes Ockeghem’s Intemerata Dei mater. This five-voice setting of an obscure Marian text in three parts which pleads for the intercession of the Virgin Mary is a tour de force, showcasing Ockeghem’s range of vocal textures, from dense and intricate polyphony to the use of homophony, such as that used to describe ‘dulci quos nectare potas’. Here Ockeghem uses longer note values to allow for a corporate and languid approach to the text, conjuring to the singers’ throats the sensations of the sweet nectar given to humankind. When Gilles Binchois, one of the foremost composers of his generation, died in 1460, Ockeghem wrote a motet-chanson, Mort, tu as navré / Miserere, deploring his death.  Much of Binchois’s bio graphical information is understood primarily from this first historical example of a motet-chanson, and it is one of the earliest recorded musical deplorations: works which lament the death of someone important to the composer.

Savonarolan texts were very important to the Este court and they continued to be set by a series of composers with links to Ferrara and the Este family. The first to set Infelix ego was Adrian Willaert, another Oltremontani composer, famous for his long career as maestro di cappella at St Mark’s, Venice. Between 1515 and his appointment at San Marco in 1527, Willaert was in the employ of various members of the Este family. Looking back to Josquin’s Miserere, Willaert’s Infelix ego uses a descending and ascending cantus firmus of Miserere mei, Deus high in the texture, with the words of Psalm 50 echoing in and out of focus and culminating as the other five voices join the final statement. It is a sign of the high regard in which the Este family held courtly music that Duke Ercole I appointed Josquin to the role of maestro di cappella at Ferrara ahead of Heinrich
Isaac in 1503, despite the now-famous letter written by the ill-fated male soprano and court spy Gian de Artiganova to Duke Ercole in 1502:

To me he [Isaac] seems well suited to serve Your Lordship, more so than Josquin, because he is better-natured and more companionable, and he will compose new works more often. It is true that Josquin composes better, but he composes when he wants to, and not when one wants him to, and he is asking for 200 ducats in salary while Isaac will come for 120—but Your Lordship will decide.

Esto mihi is from Heinrich Isaac’s well-known Choralis Constantinus, which the composer wrote in the years following his unsuccessful competition with Josquin. The work draws its text from Psalm 30 , ‘In te, Domine, speravi’, the concluding statement of Savonarola’s unfinished second meditation from prison, Tristitia obsedit me. Josquin’s O virgo prudentissima uses a double-canon cantus firmus of Beata mater et innupta virgo and is one of two settings by Josquin of a Marian text by Medici-educated polymath Angelo Poliziano. Although unlikely to have been composed during Josquin’s time at Ferrara, the text of the secunda pars alludes to the ancient hymn Subtuum praesidium, itself set by many composers with
Ferrarese connections, including Brumel, Lhéritier, Willaert and Rore.

Tu solus qui facis mirabilia is often taken as a classic example of Josquin’s Milanese style from the later 1400s. The work is primarily in Latin, includes several short duets and trios, and is largely homophonic. At the start of the secunda pars, however, Josquin again pays homage to Ockeghem by prefixing the two opening lines of text with the opening phrase of his chanson D’ung aultre amer.

We conclude with Jean Lhéritier’s Miserere mei, Domine. Another Oltremontano composer found in the choir registers of Ferrara, Lhéritier employs texts from Psalms 6 and 50. Some hints at Josquin’s Miserere are apparent in scoring and chosen text, but the work’s Ferrarese connections go further: Lhéritier uses a double-canon cantus firmus of Da pacem to provide the structure of the motet, with the same altus and tenor voices echoing the canon in Compère’s Quis numerare queat. Among
Lhéritier’s motets are also several settings of psalms with Savonarolan context and a parody mass on a chanson attributed to Févin. These connections start to illuminate a considerable fraternity of Oltremontani composers working in Ferrara in the decades after Josquin’s stay.