You are here: Home / Playlists / Martin Luther and His times, continued

The celebrations of the 500th anniversary of Lutheranism continue, including music from his own day, the Praetorius chorales, and a collection of early chorales in a world-premiere performance!

Martin Luther’s self-description as an “insignificant and ungifted tenor” was modest to the extreme. Schooled in the artes liberales of his time, he had a command of music theory and composition, was a skilled lutenist, and had such a gifted voice that Hans Sachs termed him the “Wittenberg Nightingale.” Whether at table or in the liturgy, music belonged to his life and his faith. As so we are now setting out on a musical journey with top soloists, the Bach Choir of Siegen, and the Johann Rosenmüller Ensemble, all under the renowned music director Ulrich Stötzel, on this CPO release for the Luther Year 2017 featuring works by his friends and by composers active in his environment, with him, or shortly after his life: Werner Fabricius, Hans Neusiedler, Thomas Stoltzer, Heinrich Schütz, Johann Eccard, Michael Praetorius, Johann Sebastian Bach, and others. The four-part cantus firmus motet based on Psalm 118: 17 is even by Luther himself.

In the new series from CPO, “Music from Wolfenbüttel Castle” we are now presenting chorales by Martin Luther in settings by Michael Praetorius with a proven and internationally renowned team of interpreters – our very own WESER-RENAISSANCE of Bremen under the conductor Manfred Cordes. When Duke Heinrich Julius von Braunschweig-Wolfenbüttel appointed Michael Praetorius to the post of chamber organist in his court chapel around 1593 and then promoted him to the post of court chapel master in 1604, he selected a musician whose family had enthusiastically followed the Reformation ever since its beginnings. This family’s adherence to the Lutheran confession may be traced back directly to the Reformer himself. After all, until 1534, Michael’s father, at the time still known by the German surname “Schulteis” instead of its Latin equivalent “Praetorius,” studied at the University of Wittenberg, where Luther was a faculty member. Praetorius dealt systematically with the publication of his vast musical oeuvre. Mainly sacred in character and mostly involving chorale settings, it conveys the musical heritage of the Reformation in all its multifaceted forms directly to the present. These forms range from the simple cantional setting to the modern polychoral concerto following the precedent set by Giovanni Gabrieli in Venice. The chorale concertos heard here from his collection Polyhymnia caduceatrix et panegyrica are “Solemn Concertos of Peace and Joy.
--Halleluja, komm Heiliger Geist;
--Ach Gott vom Himmel sieh darein;
--Vater unser im Himmelreich;
-- Nun frewt euch lieben Christen gemein;
--Mit Fried und Frewd ich fahr dahin;
--Erhalt uns Herr bey deinem Wort 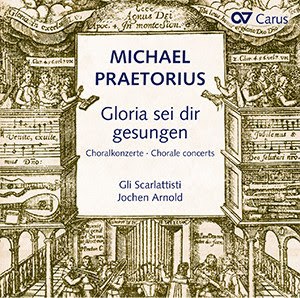 Michael Praetorius is, without doubt, one of the trailblazing composers of the late 16th and early 17th centuries. His synthesis of simple, folk-like chorales with the lush aesthetics of the new Italian style make him one of the most multifaceted and innovative musicians of his time. For the Reformation Year 2017, the ensemble Gli Scarlattisti under the direction of Jochen M. Arnold presents a series of his chorale concertos for larger ensembles, based mainly on texts by Martin Luther and Philipp Nicolai. With their witty and eloquent musicianship, the performers invite their listeners to explore the impressive oeuvre of one of the fathers of Protestant church music!