The great Italian early music conductor and performer visits us as we hear some composers at the cusp of the Baroque: Luca Marenzio, Alessandro Striggio, and Don Carlo Gesualdo.

From Allmusic.com:  Italian Renaissance composer Luca Marenzio was internationally recognized as the leading composer of madrigals at the height of his career, in the last two decades of the 16th century. He was so popular (and the sales of his music so lucrative) that within years of his death, both Flemish and German publishers had issued volumes of his complete five- and six-part madrigals, an honor almost unheard of at the time. Marenzio's madrigals, while anticipating the songlike lyricism of monody that would come to dominate vocal music of the early Baroque, made full use of the textural and expressive qualities of Renaissance polyphony. His music was not quite as adventurous as Gesualdo's, but it still pushed at the harmonic conventions of the time in order to draw out the emotion of the texts with the maximum expressivity. Palestrina, the paragon of polyphonic correctness, is known to have despised Marenzio for placing expressive content above the rules of proper counterpoint.Marenzio wrote over 400 madrigals, and this collection includes a sampling of 28, written during the composer's most fruitful period, between 1580 and his death in 1599. Five- and six-part madrigals are represented, some a cappella and some accompanied, and there are several instrumental arrangements of the works made by composers of Marenzio's generation. Using texts by a variety of poets, they are remarkable for the emotional depth and inventiveness of the text setting, the sure handling of harmonies that are sometimes vertiginously chromatic, and their expressive range. The majority are melancholy meditations on lost love, but Marenzio finds infinite ways to express anguished intensity. Rinaldo Alessandrini leads six singers and a small instrumental ensemble of Concerto Italiano in impassioned performances. The singers have distinctive, lovely voices, and each sings with warmth and transparent expressiveness, but at the same time, their blend is gorgeously rich and smooth, an ideal combination for these madrigals. Opus 111's sound is immaculate and wonderfully present. The CD should be of strong interest to fans of Renaissance vocal music and superlative ensemble singing. 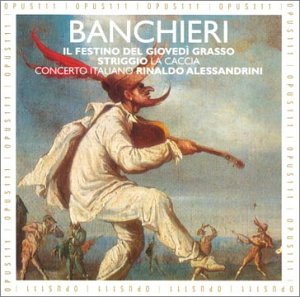 From BBC Music: This talented Italian vocal ensemble, under the direction of Rinaldo Alessandrini, has already proved its excellence in previous discs of Monteverdi madrigals. In this engaging new release the artists turn their attention to ‘madrigal comedies’ by 16th-century Alessandro Striggio and his younger contemporary, Adriano Banchieri. These are highly entertaining, often witty pieces, with a strong onomatopoeic element and a profusion of vividly depictive images running through them. Comedy and pathos alternate with effective rapidity. Horn calls, yapping dogs and a beautiful evocation of the setting sun feature prominently in Striggio’s The Hunt, while Banchieri’s Fête for the Evening of Carnival Thursday, before Supper contains among its highlights a passage of hilarious counterpoint improvised by an owl, a cuckoo, a cat and a dog over a cantus firmus.

What a marvellous model this kind of writing provided for the young French composer Charpentier who, returning from Italy, incorporated similar passages in his comédie ballet collaborations with Molière. No less waggish is Striggio’s Chattering of Washerwomen, a masterpiece of bitchy gossip. I wish my local launderette were half as lively. An outstanding performance from start to finish. 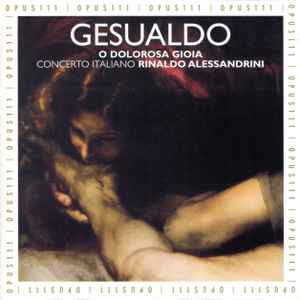 From Gramophone: The first impression from this CD is that Rinaldo Alessandrini’s Gesualdo lacks the burnished warmth of his Monteverdi. The acoustic is less resonant, and the exactitude of the singers’ tuning makes it cold, at times almost claustrophobic; in other words the tone has been judged just about perfectly. We begin with perhaps the most famous madrigal of them all, Moro, lasso, al mio duolo, and the tendency to downplay the dramatic potential of those famous chromatic audacities sets the tone from the start. Indeed, some may find the understatement as surprising as I did. However, these interpretations have real staying power, a narrative persuasiveness that unfolds with repeated listening (while making clear the fragmentation at the heart of the music). To my mind, Concerto Italiano’s approach does Gesualdo more favours than the histrionics that his music can so readily invite. The same is true of Alessandrini’s insert-notes (co-written with Iain Fenlon), which start from the premise that Gesualdo was a real artist, not a musical shock-tactician, nor a composer-cum-psychopath, nor yet a one-trick pony. It is true that similar strategies recur from work to work: for example the sensuous settings of words addressed to the beloved – ‘dolcissimo cor mio’, ‘Dolce del cor tesoro’, both rendered as sensually as possible – and the contrasts with harsher sentiments that immediately follow. It would be absurd to claim for Gesualdo a range to which he probably never aspired. As it is, I defy anyone to guess how the penultimate syllable of the phrase ‘potessi dirti pria ch’io mora’ (in Merce grido piangendo) resolves. That a major chord can be so jarring sums up Gesualdo’s art very neatly, and here as elsewhere the singers find unsuspected poignancy in a pause or a breath. I said before that these performances grow on one: as I write, I’m still listening, and they still do.
The programme begins and ends with madrigals from composers whom Gesualdo admired. The contextualisation of the composer in no way detracts from his achievement. However, these performances are not quite so convincing: they are weighed down by the continuo (harp and theorbo), which is absent from the performances of Gesualdo, and I cannot get used to the timbre of the soprano Alessandrini uses for these pieces – white and rather strained. But his Gesualdo really is indispensable.'